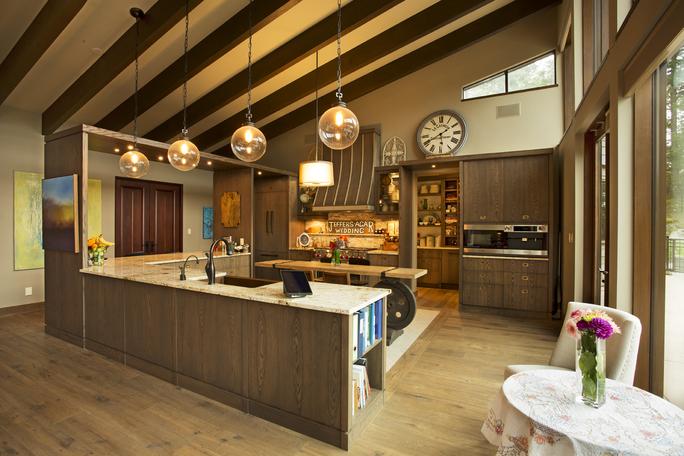 It’s not every day that a family meal can boast views of a lake, bald eagle sightings overhead and the hoot-hoot of a great horned owl at night. But for Tim Agar and his family of four, that’s exactly what’s in store—at breakfast, lunch and dinner. In fact, it was the spectacular setting that drew […]
By Catalina Margulis

It’s not every day that a family meal can boast views of a lake, bald eagle sightings overhead and the hoot-hoot of a great horned owl at night. But for Tim Agar and his family of four, that’s exactly what’s in store—at breakfast, lunch and dinner.

In fact, it was the spectacular setting that drew Tim to this undeveloped piece of land on Vancouver Island, where he set out to build his dream home: a 7,000-square-foot, two-storey house that includes an attached garage, six bedrooms and six bathrooms, which he shares with wife Samantha and sons Griffin, 9, and Noah, 7.

For the self-proclaimed farm boy, who grew up in the Okanagan Valley and was living in Victoria at the time, securing the land, with its majestic views of Prospect Lake, was a dream in itself. “I’ve always looked for this farm-style, rural feel,” says Tim, a principal with Horizon Pacific Contracting. “In a densely populated area like southern Vancouver Island, it’s hard to find a property that’s private, secluded and surrounded by nature like this.” 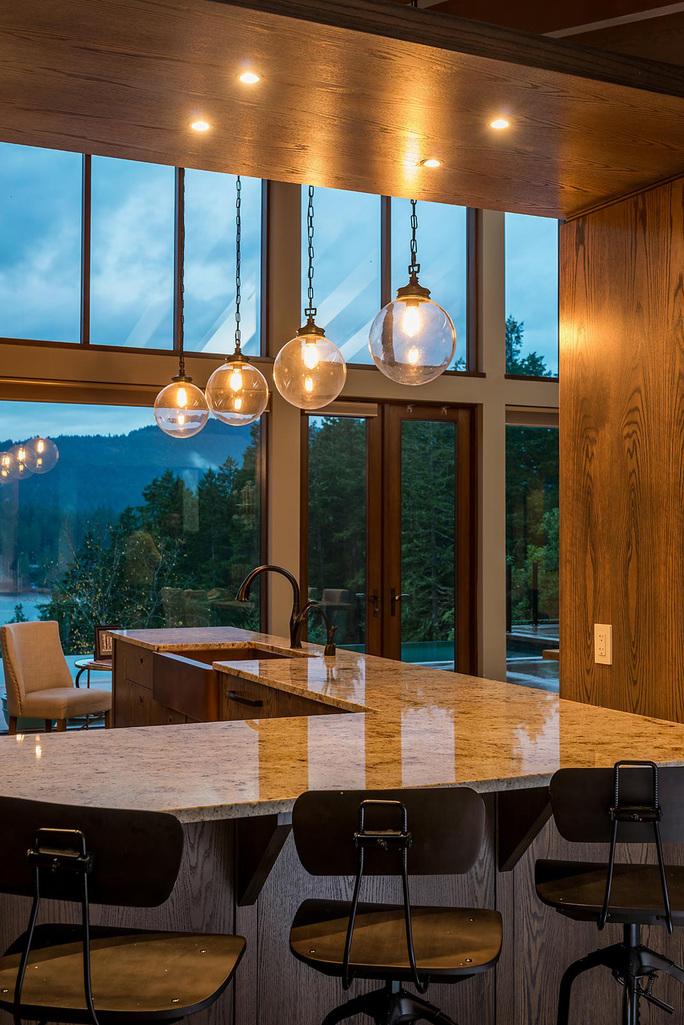 Maintaining the integrity of the land was a top priority for Tim. “It was all agricultural land, so we were very careful about our placement—I think we cut down one tree,” he says. “Situating the house correctly is a critical component to how it shades itself in the summer and how it gains solar benefit in the winter. From that perspective, it’s well suited.”

Family, too, influenced Tim’s eco-conscious choices. “When you have a family and children, you start to think about the future a little more,” he says. “As I became older, I also became aware of my own sensitivity toward chemicals, pollutants and inside air quality. So when I decided to build a home for my family, I took a careful look at what environmental options are out there.”

Tim sought out LEED (Leadership in Energy and Environmental Design, an international rating system for green building, promoted by the Canada Green Building Council in Canada) for third-party certification. “They were involved in all aspects, from the design of the house and the material selection to thinking about waste management,” he explains. “They were very collaborative from the outset. The vast knowledge base that the Canada Green Building Council has at its disposal is invaluable to people like me who are attempting to do things differently.”

Working with the project’s LEED representative, Troy Glasner of E3 Eco Group, as well as the Canada Green Building Council and the project’s architect, Tim’s company helped the home achieve its environmentally friendly aims. “Each step of the process is scrutinized in terms of implementation and planning,” Tim says.

Tim chose renowned architect Bruce Wilson to bring his vision to life. “Bruce was very creative—a free spirit. Unfortunately, we lost him to a health issue at the end of the project, when he passed away,” says Tim. Wilson’s team—design assistant Kory Elliott, in particular—stayed with the project to see it through.

Acclaimed interior designer Ivan Meade of Meade Design Group worked with Tim and Samantha to realize the couple’s hopes for the interior space. “He worked with us [to create] the texture and feel of the home,” says Tim. “The house, when you look at it, the architecture is decidedly modern, but we didn’t want a cold home. Meade was tasked with blending the modern shape with a more rustic interior.”

To that effect, hand-scraped floors, shingled walls, aged-oak kitchen cabinets and curios were incorporated to give the interior a shabby-chic feel.

As for the exterior, the home’s shape is based on the fundamentals of building shading. “It has a lot to do with overhangs,” says Tim. “When you have a large overhang, it doesn’t fit into traditional architecture anymore.” 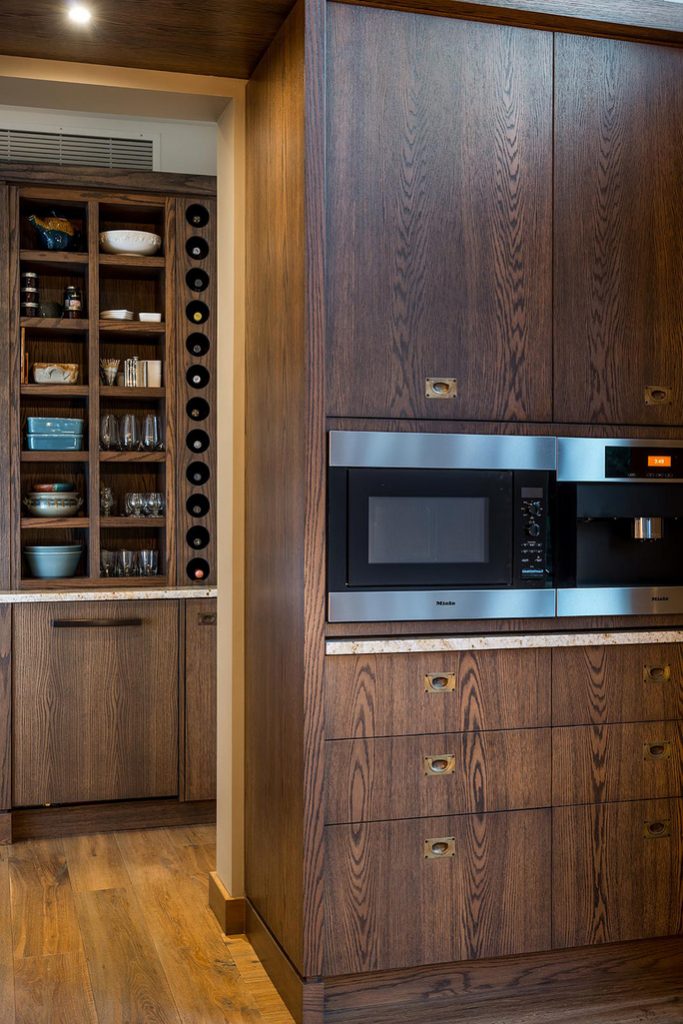 The kitchen itself came with its own wish list. “We wanted to integrate an antique feel,” says Tim, “so we have reclaimed brass hardware on all the cabinets, and a repurposed farm table that does double duty as an island in the kitchen.”

“One of the first founding principles of the LEED program is environmental consideration,” notes Tim. “With each step of the process, when there is a material selected, you’re considering where the materials come from: Are they harvested sustainably? Are they relatively local to the building site? What’s the potential for off-gassing and VOCs? In the case of a reclaimed hinge, that’s something you’re rewarded for because you’re repurposing a product already in existence, rather than creating from new. So the hardwood floors in the house are reclaimed oak instead of being harvested from new trees. All the materials in the kitchen are local within 800 kilometres of the building site so the carbon footprint is at a minimum. All of the new woods that we use inside are FSC certified, which ensures that the woods are harvested in a sustainable manner. LEED considers each one of these things.”

In the kitchen, appliances are Energy Star rated. Materials that make up the cabinetry are low VOC and are made by Flakeboard. Handles and pulls and interior doors are reclaimed and bought from the used market. “Even the tiles in the centre of the kitchen are salvaged goods from another construction site,” says Tim. “And the stones on the backsplash are local to the building site within a few hundred miles to keep carbon offsets to a minimum.” 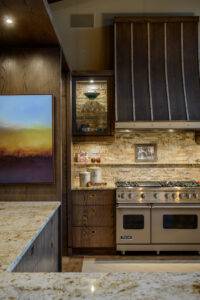 Energy-efficient considerations extend throughout the home’s design. “One of the things we put a great deal of effort into was building the house to a very high standard in terms of its energy performance around electricity and energy consumption,” says Tim. As a result of the team’s efforts, EnerGuide Canada rated the home an 89 out of 100, “the second- or third-highest-rated home in Canada,” says Tim.

Work on the property began in late 2010 and was completed in 2013. When asked what his favourite part of the house is, Tim admits: “The outdoor space, the privacy, the natural setting. Of course, my wife is extraordinarily happy with the kitchen, except for the fact that she has to cook for two small boys and has to do a lot of cleaning.”

Tim shares that most of the family’s meals take place at the combination island/table in the kitchen, which features wall-to-wall glass windows offering beautiful lake views. “It’s alive with nature every morning, with the birds overhead,” he says. “We have large raptors nesting nearby, so it’s not uncommon to see one or two bald eagles floating in the sky. And we’re in the middle of a great horned owl colony, so every evening you can hear their hoots.” Sounds like music to our ears.

Eco home
Aiming for a green home? Look for these household must-haves.

For more information, check out these green home resources: