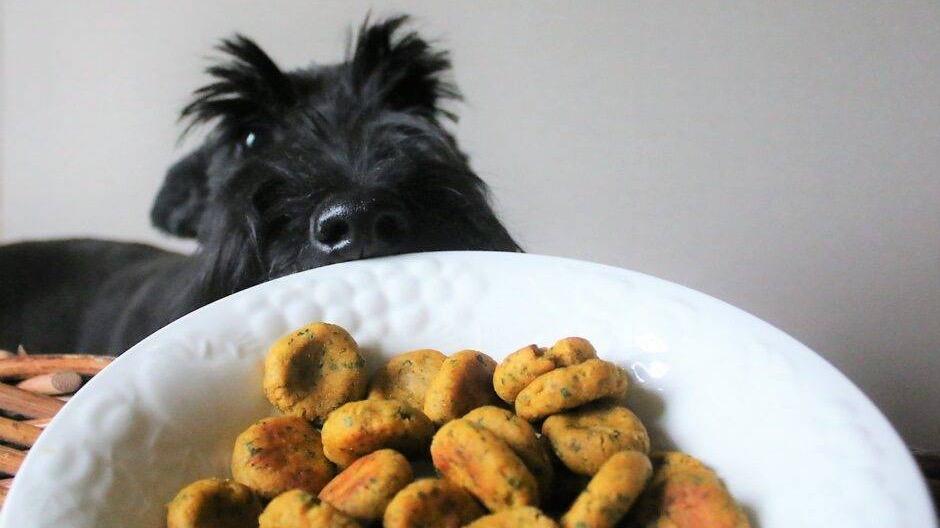 Few things are as frustrating as researching what we should feed our dogs; so many claim to be experts and swear by their version of the ideal canine diet (kibble, canned, raw, dehydrated…). The latest in dog nutrition is the grain-free diet; traditional vets say it’s unnecessary and holistic vets say it’s essential. The reasons for giving dogs grain-free food seem fairly sensible: wheat, for example, is a frequent allergen in dogs, and common grains like wheat and corn are more likely to be genetically modified. Moreover, if 10% of people are gluten-intolerant, could this also be true for dogs?

A grain-free diet is stronger when you consider that dogs have shorter digestive tracts than omnivores and herbivores, so they’re not well-suited to digesting starchy carbohydrates like grains. Dogs don’t have the kind of flat molars built for grinding plant matter. And, unlike omnivores and herbivores, dog saliva doesn’t have the enzyme amylase, which starts the breakdown of starches into simple sugars. These things suggest that grain-free is the way dogs were meant to eat.

The problem, however, with the growing ranks of grain-free kibble is that most rely heavily on potatoes to bind all their ingredients together, which means a diet very high in carbohydrates – often around 50%. When you put it this way – taking away grains only to create a high-carb diet – it doesn’t make much sense.

Holistic vets advise that a dog’s diet shouldn’t exceed 10% carbohydrates – not an easy thing to achieve since it usually means drastically increasing the percentage of meat and stretching the budget too far. For vegetarians and environmentalists, it’s also an ethical challenge.

One route many low-carb recipes take is to cut the amount of meat by adding beans. And why not? One of the world’s longest-living dogs, a UK collie named Bramble, lived to be 27 on a vegan diet loaded with lentils.

With all of this in mind, I put together an easy, affordable recipe for extremely low-carb dog biscuits that’s been a resounding success. Every ingredient packs a nutritional punch: the egg, flour and seeds are high in protein; the pumpkin adds potassium, anti-oxidants and beta-carotene; the coconut oil is anti-fungal and anti-bacterial and aids the absorption of calcium and magnesium; the flax has omega-3 essential fatty acids; the turmeric is anti-inflammatory, and a strong antioxidant; and the parsley adds folate, iron and flavonoids.

In a medium-sized mixing bowl, mix the seed butter, pumpkin, coconut oil and egg.  Add the remaining ingredients and mix until combined.  The dough will be sticky: dust it and your hands with a pinch or two of the flour to handle it more easily. Scoop out the dough about ½ teaspoon at a time, roll into balls, and place on a baking sheet lined with parchment paper.  Keep dusting as needed.  When all the dough has been used, press down on each ball to make a fingerprint in the centre.  Dip your finger in water to make it easier to press down without sticking to the dough.  The biscuits can be placed together on the sheet – they won’t spread.

*A note about sunflower seed butter:  you can buy it at the store, but if you have a food processor, it’s easy and less expensive to make your own.  Simply process about 2 cups of the shelled seeds at a time (roasted or raw — it doesn’t matter) for 2-3 minutes, occasionally scraping down the bowl, until you have a reasonably smooth butter; it’s okay if it’s a bit crumbly.  Store the butter in the fridge.  You can replace it with peanut butter in this recipe, although peanut butter has inflammatory properties and, unless they’re organic, peanuts have a very high chemical load.

Bake at 350 degrees for 12 minutes for soft biscuits, and 22 minutes for crunchier biscuits.  Let cool on the baking sheet, then store in a container in the fridge for up to two weeks.  Makes approximately 20 biscuits.

Latham Hunter is a writer and professor.  As a mother of five kids with varying dietary needs, she’s been working on gluten-free, dairy-free, vegan and vegetarian cooking for as long as she can remember.  She focuses on sustainable, healthy ingredients, particularly organic, plant-based meals.