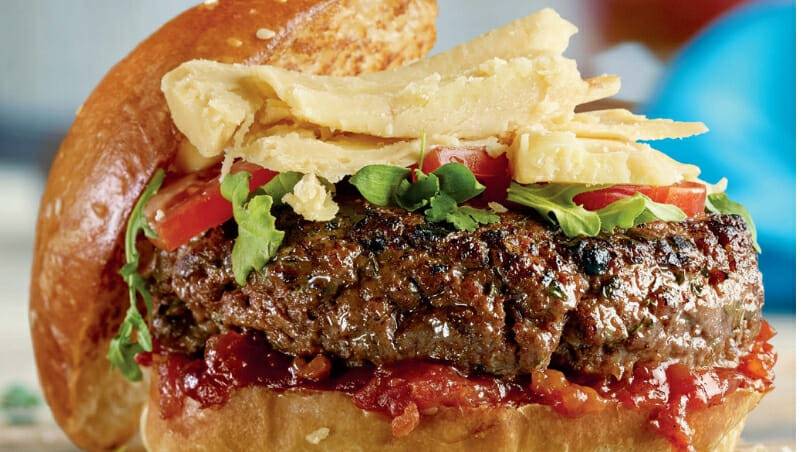 Caramelized onions are a traditional condiment for the burger in the United Kingdom and North America. A burger patty’s two best friends make one magical burger ingredient.
By Afrim Pristine

Caramelized onions are a traditional condiment for burgers in the United Kingdom and North America. So my thinking was to take a burger patty’s 2 best friends (caramelized onions and cheddar cheese) and put them together to make 1 magical burger ingredient. It’s so easy, and you will look like the burger master in front of all your friends. Once the heat hits that cheese, look out for the incredible aroma that will come out of your barbecue.

Excerpted from For the Love of Cheese: Recipes and Wisdom from the Cheese Boutique by Afrim Pristine. Copyright © 2018 Afrim Pristine. Published by Appetite by Random House®, a division of Penguin Random House Canada Limited. Reproduced by arrangement with the Publisher. All rights reserved.

If you don’t like lamb (well, no one is perfect), just use beef. I won’t tell you how to dress your burgers, but in this recipe, the cheese has a lot going already, so try to keep it minimal. If I were you, a good sliced pickle and a touch of barbecue sauce would make me a happy camper.

Maître Fromager (cheese master)
Afrim Pristine is Canada’s premier cheese expert and owner of the cheese boutique, with over 23 years of experience in the art of cheese making. From studying with some of the world’s greatest cheesemakers like Luigi Guffanti, Stefano Sarti, Carl Schilt, Jean-Paul Morin as well as hands on training from his father and world’s most renowned dairy farms, afrim’s passion and commitment stems from his father and family business of 48 years, cheese boutique.

As one of the world’s youngest “maitre fromager”, an honour bestowed in February 19, 2013, by the France based Guilde Internationale des Fromageres, an exclusive association representing more than 5,000 dairy professionals worldwide, Afrim is the only Canadian to receive this title, awarded to those who demonstrate exceptional cheese knowledge and recognized within their community.

Prior to that achievement, Afrim was also the youngest Canadian recipient to the “chevalier,” a distinction from the Confrérie des Chevaliers du Taste Fromage de France (march 2007), following an upgraded status to “Officier du Fromage” in April 2010. He was also awarded with top 30 under 30 in the food industry by Ontario Hostelry Institute.

Afrim’s media appearances include the Marilyn Denis Show, City TV’s Breakfast Television, CTV’s Your Morning, Food Network, and expert consulting for top chef Canada, Masterchef, Chopped Canada and more. Most recently, he was honoured as top 50 most influential people in Canadian food by the Globe and Mail, July 2016, and named top 10 most influential people in the food industry by LCBO Food & Drink magazine.

Afrim’s first cookbook “For the Love of Cheese” hit shelves in October 2018!

Cheese Boutique, a 10,000 square foot gourmet food store located in the heart of Etobicoke, has continued to provide a wide range of gourmet ingredients to customers and Toronto’s culinary community. A store that once started as a small mom and pop shop, expanded and grew into a family operated business providing a unique shopping experience, all due to the pristine patriarch, fatos pristine. Now, in its 48th year, cheese boutique contains the cumulative knowledge of three generations whose expertise and influence has earned accolades locally and abroad.

At Cheese Boutique prosciutto hangs from the ceiling, truffles are flown in every Wednesday, foie gras locked away, beef is dry aged minimum 40 days, 80 different terroirs of olive oils, jams made from green walnuts and artisanal breads baked in-house daily. With 500 cheese selections, cheese boutique is one of the original retailers who double as “affineurs” inside the cheese vault, curing some of the oldest wheels in North America. Cheese boutique is located at 45 Ripley Ave, Toronto. Hours of operations: Mon to Fri 9am to 7pm and Sat and Sun 8am to 6pm.

Use Perch, Pickerel or Catfish for this hot-from-the-skillet crispy delight

There is quite a variety of stone fruits available across Canada during the summer months.