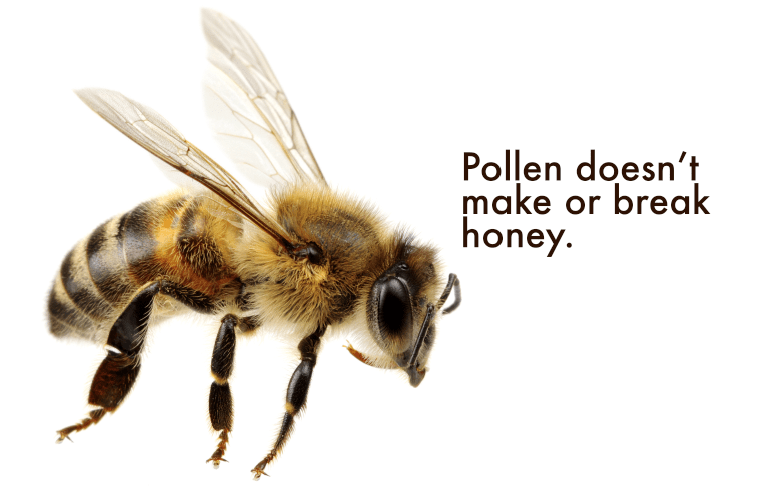 Does Honey have to have bee pollen?
By Wayne MacPhail

There is a story floating around social media that claims that 75 per cent of honey sold in stores is not actually honey. The story states that honey which contains no trace of bee pollen cannot be called honey. The problem is, the article is wrong

A lack of pollen has no impact on whether or not a sweet liquid can be called honey. The author of the story conflates the process of ultrafiltration and the removal of pollen. And despite the piece’s claim, not having pollen in the honey does not prevent it from being called honey — even If there is not a single grain of pollen suspended in it.

That only makes sense. Pollen in a hive is a byproduct of a bee’s journey to flowers and back. It adds no nutrients to the honey and is — like bee wings, bee legs, and dirt particles—debris many beekeepers and honey manufacturers filter out. Why? Because that particulate matter can cause honey to be cloudy or to crystal sooner than it would if it were filtered and clear. Ultrafiltration, which is mentioned in the story, is a specific filtering process that requires high pressure and a dilution of the honey with water so it can more easily be forced through fine filters. But modern filtering techniques that are not ultrafiltration also remove pollen.

Organic honey may contain pollen because some of the fine filterings require diatomaceous earth, which organic standards do not allow. That doesn’t make them more “honeyish” than more finely filtered honey.

So, stand down folks, honey without pollen is still honey. Pollen isn’t necessary for the sweet, delicious fluid and the story going around is nonsense. And that is the bitter truth.