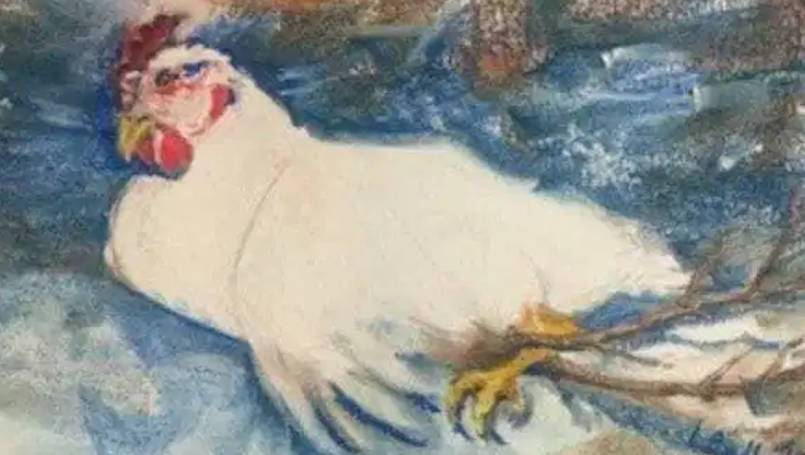 Two of my art school teachers had a small farm outside of town when I was a student at ACAD in Calgary, Alberta. They acquired 7 new laying hens one week before Christmas in 1973, stemming from an unusual event which happened as I walked through Riley Park on my way to class. I usually […]
By Lesley Schatz

Two of my art school teachers had a small farm outside of town when I was a student at ACAD in Calgary, Alberta. They acquired 7 new laying hens one week before Christmas in 1973, stemming from an unusual event which happened as I walked through Riley Park on my way to class. I usually took my little dog Sally everywhere…even to class but for some reason I left her at home that day or so I thought!

As I made my way through my shortcut in the bushed-in hillside north of the park I caught a glimpse of what I thought was white fur. I immediately suspected that Sally, my faithful white dog, had followed. But no, it was a chicken! A not very savy chicken. One with a trimmed beak…a cage layer who had never been outdoors in her life and thought she was caught and dying when the crook of her leg snagged a branch. She had been lying there for a while, or so it seemed by her resigned lifelessness. I threw my coat over her to keep her calm and warm and went off to search for any others.

The broken pieces of a wooden crate along 14 th street led me to suspect more unfortunates were hiding and probably in shock. Some who might even possibly be injured.

It took no time to read the story of an early morning event never before seen Riley Park’s modern past. Dogs had had fun with a few of the crate mates (which were freed when their shipping crates fell off a flatbed on their way to a meat processing plant) as evidenced by the canine footprints in the snow and the scattered piles of feathers. I stoically resigned myself for the worst.

Once laying hens have had a season of egg laying, most large laying hen farms sell them, staggering their cull season to always maintain an egg supply. Sadly, I stared at two or three more piles of feathers, the only thing left from early morning romps by dogs or birds of prey. Luckily for the survivors, I found six more confused girls ( hens) wandering about, pondering on what only cage chickens could ponder about which wasn’t much because they were easy to catch. I popped them one by one under my ski jacket with their buddy where they stayed obediently to my surprise. I continued my search of the park until I figured all the live ones had been caught. Next step was to get them up to my art school which is where I was heading before I discovered the broken crates and sad chickens. Since I already had the hens contained under my old red coat, it was easy to scoop them up net- fashion and carry them over my shoulder up the steep hill to school.We got there finally and Luckily one of the teachers I mentioned in the first paragraph greeted me at the college with an open door and warm hello…she must have had a premonition!

Somehow she found a couple long wire crates in the still life room to house the avian ‘new students’. We popped the girls ,gently into the roomy carriers one at a time and gave them water. I took them up to the painting studio and proceeded to do some chicken paintings (One of which Thomas Patton still has). My rural teacher friend took the hens home to her farm at the end of the school day to join her other farm hens and named them all ‘Lesley’ after me.

I also became the happy recipient of eggs on a regular basis. This was a happy ending all round and so glad that I took my short cut through the park on my way to school or the ‘Lesleys’ would not have been happily clucking freedom songs at their first farm Christmas. I am sure they lived happily ever after on Vera and Rolf’s small farm outside of Calgary.

Lesley Schatz is an artist (BFA; ACAD, 2010) and musician with 5 CDs on Bear Family Record’s.  As well Lesley studied Cree language and later obtained a Master of Education in Land Based Learning in 2012 from the University of Saskatchewan. A mother of 4 and new Grandmother of two!, Lesley lives on her own farm with her stock guardian dog, Oki.

Her other publications include an academic paper for Community Diversity, An article entitled Home is where the Hearth is for Harrowsmith and several short stories and poems for other publications. Lesley is a songwriter who has had world wide recognition and continues to have concerts as well as art shows.