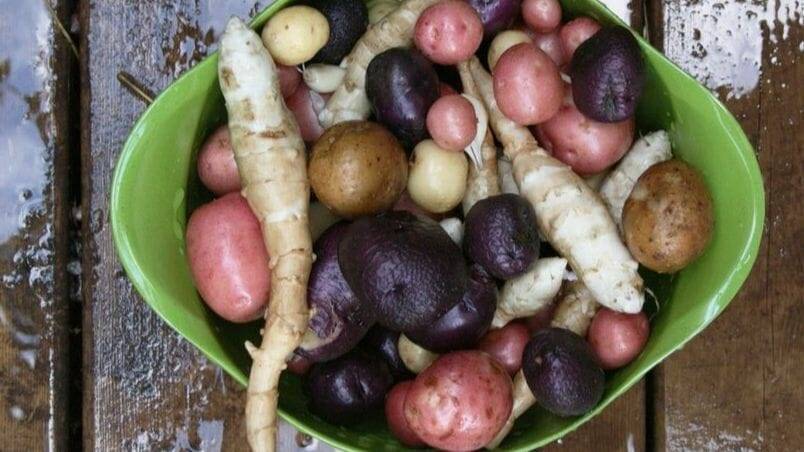 My introduction to sunchokes (Helianthus tuberosus) was as an exotic item on fancy menus, where they were called Jerusalem artichokes. I remained in the dark about the true provenance of this wonderful North American plant for many years. Then, several years ago, I visited the farm, Soiled Reputation, of Anthony John, a.k.a. the Manic Organic, […]
By Signe Langford

My introduction to sunchokes (Helianthus tuberosus) was as an exotic item on fancy menus, where they were called Jerusalem artichokes. I remained in the dark about the true provenance of this wonderful North American plant for many years. Then, several years ago, I visited the farm, Soiled Reputation, of Anthony John, a.k.a. the Manic Organic, in Perth County, Ontario. Strolling through one of the recently turned fields, I noticed tubers littering the furrows—chokes, whole or pieces—here and there on the ground. I quietly picked up a few, shoved them into my pocket and planted them when I got home.

Well, those first, somewhat ill-begotten tubers, failed. Karma? So, I emailed him, confessed my sin, and asked him for a few to plant, andstandup guy that he is, he sent me down a grocery bag full. I shared some with friends and planted the rest, and I’ve been rolling in them ever since.

This workhorse is neck and neck with bee balm for my heart. Also known as sunroot, earth apple or, in French, topinambour, which is not to be confused with topinambur, a German grappa-esque spirit distilled from the tuber.

A member of the sunflower family, the sunchoke is native to eastern North America, from Quebec all the way down to Florida, and it’s found as far west as North Dakota and Manitoba. This indigenous flowering perennial is now commercially cultivated for its tasty tuber and often grown by flower gardeners for its pretty yellow flowers on towering stalks—up to 5.5 metres (15 feet) in my garden!—often without the gardener being aware of the delicious bounty under their feet.

Their unique flavour almost defies description, and just about everyone who tries them for the first time has their own way of expressing the taste: earthy, sweet, crisp, fresh, like water chestnuts or very subtle. I find they taste quite like raw, unsalted sunflower seeds. That figures, right?

There are just as many ways to eat them as there are to describe them. Treat sunchokes as you would a potato—they fry up into amazing chips! They can be grated and fried into latkes, or sliced and used in scalloped potato recipes. Use them in soups, stews, purées and mashes, either with potatoes or on their own. Enjoyed raw, they’re crisply refreshing and do beautifully shaved or grated into salads; just keep in mind, they brown, as an apple does, so quickly dress them in a vinaigrette.

And these multi-purpose plants are super-easy to grow: they’re tough, drought- and disease-resistant. Pests don’t seem to make a dent in them, but their lower leaves do tend to suffer from powdery mildew if they’re not perfectly happy.

Their impressive height makes them great for privacy and background planting, and since they bloom well into the fall—as late as mid-November in my southern Ontario garden—they offer bees and other pollinators one last chance to feast before the big chill.

Also, with sunchokes, there is no need toreplant year after year; this is a plant-once-and-forget-about-it crop. However, left unchecked or uncontained, they can take over your garden. Eat them to control them.

Because their stalks are thick and strong, with wide leaves, they can do double duty as living trellises for climbers that enjoy a bit of shade: peas, cucumbers, wax beans. They’re quite pretty with volunteer morning glories weaving their way up to find the sun. I’ve stripped the bottom-most leaves off an exceptionally thick and tall sunchoke stem for this purpose, with no harm done to either the flowers above or the tubers below.

Sunchokes are ready to harvest late in the season. Dig them up too early and all you will find will be tiny nubbins and brittle roots. For the fattest, juiciest, most flavourful tubers, wait until you’ve experienced two killing frosts. The tops should be grey and completely withered and crunchy. That means all the sugars, water and other good stuff has drained back down into the hungry tubers. And remember, leave a few tiny ones behind to ensure a good crop next year. Or you can just leave them in the ground all winter long. I’ve even dug them up in April, just as soon as the ground thawed, and there they were, crisp, fat and tasting just as sweet as they did in November. But, keep in mind, as soon as they get to work making the plant, they will lose weight, sweetness and moisture.

Funny story: some folks suffer tummy trouble if they eat too many chokes in one sitting. I told an East Coaster I was cooking up some of my sunchokes. “Oh,” he exclaimed with a chuckle. “Fart potatoes!” Pardon me? “Oh, you’ll see.”

Turns out sunchokes are one of nature’s richest sources of inulin, a prebiotic dietary fibre, or fructan. It’s a substance that feeds probiotics, and probiotics are the good bacteria that live in our guts. When we feed probiotics with prebiotic-rich foods, they have a fiesta, and they get a little, ahem, gassy. It’s all good, and good for you. Just don’t serve sunchokes on a first date … or second … or third … Perhaps it’s best to wait for marriage before you feed your beloved sunchokes? But when you do, here are two of my favourite ways to cook them.

Wash and dry sunchokes, trimming off any super-skinny, black or straggly bits. Depending on the size of the chokes, you will need 1/2 to 1 full piece of bacon per. The idea is to cover quite a bit of the ‘choke’s surface area with bacon.

Wrap the chokes in bacon and set on the parchment-lined sheet, seam side down.

Roast until the bacon is browning nicely and going crisp at the edges, 15 to 20 minutes. While the chokes are roasting, make the reduction.

In a large saucepan or high-sided skillet over medium-high heat, add the vinegar and maple. Stir often and keep at a gentle boil until it has reduced by half and is syrupy, about 15 minutes. It should thickly coat the back of a spoon, and keep in mind, it will thicken further as it cools.

Set aside to cool, then transfer to a jar or small pitcher.

If you have leftovers of this reduction, keep it in the fridge almost indefinitely and enjoy it on salads, grilled veggies, cheeses, roasted meat, even ripe strawberries, on and on.

To serve, place three chokes on a salad plate, drizzle with about 1 tbsp of the balsamic reduction—more or less to taste—and crumble chèvre over top, again, about 1 tbsp each serving.

Finish with a grinding of fresh black pepper, if you like.

Serves 4 as a side dish Roasted roots of any sort are delicious, especially in fall, when meals call for coziness. Use any variety and combination of root veggies for this—domestic and wild—from sunchokes, American ground nut to wild yam, arrowhead, burdock, and lotus to the tiny northern rice root. Since many wild roots have some bitterness (the burdock, in this case), I’ve drizzled with maple syrup, but another way to add sweetness would be a drizzle of honey, a higher ratio of sunchokes (which roast very sweet!), or the addition of apples, pears, beets, carrots or sweet potatoes to the mix. Serve with a finishing drizzle of maple or birch syrup.

Salt and pepper to taste Preheat oven to 375°F (190°C). Wash and prepare roots; drain. Add oil to roasting pan large enough to accommodate the roots without them overlapping too much. Season with salt and pepper; drizzle with maple syrup and toss in the pan. Roast for about 1 hour or until tender-crisp and golden.

Serves 4 as a side dish or appetizer

There’s a natural sweetness to sunchokes that makes them the perfect foil for smoky bacon and the tang of soft, unripened goat cheese and balsamic vinegar. This delicious dish is super-easy but looks like a million bucks at the table.