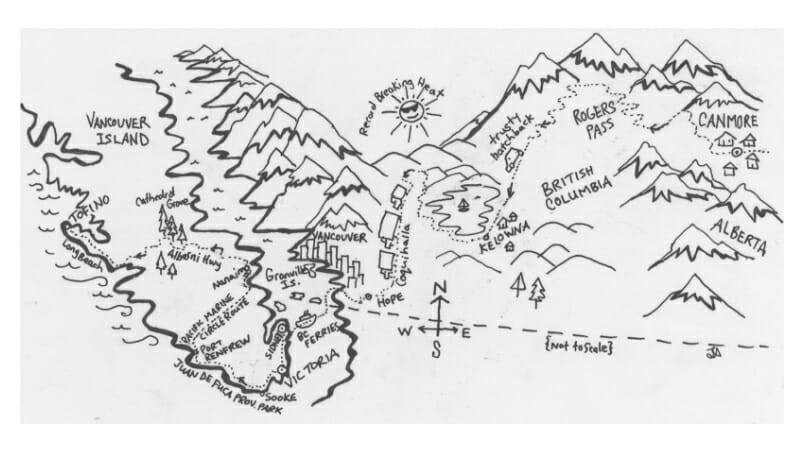 Story Chasing Along the West Coast

A sneak peek behind the pages of a B.C. children’s author and illustrator.
By The Harrowsmith Team

I unroll the nautical map and imagine a ship struggling in a southeast gale as it navigates around the remote peninsula I trace with my finger. In the upper corner, a bird soars above an archipelago in the morning mist.

Like many who wander, my home is decorated with maps. As a children’s book illustrator and author, I also use them in my art. In this dusty antique shop on Vancouver Island, where the road begins its winding route west through cathedral forests, this weathered map has inspired me almost as much as the towering mountains circling Everest Base Camp have. 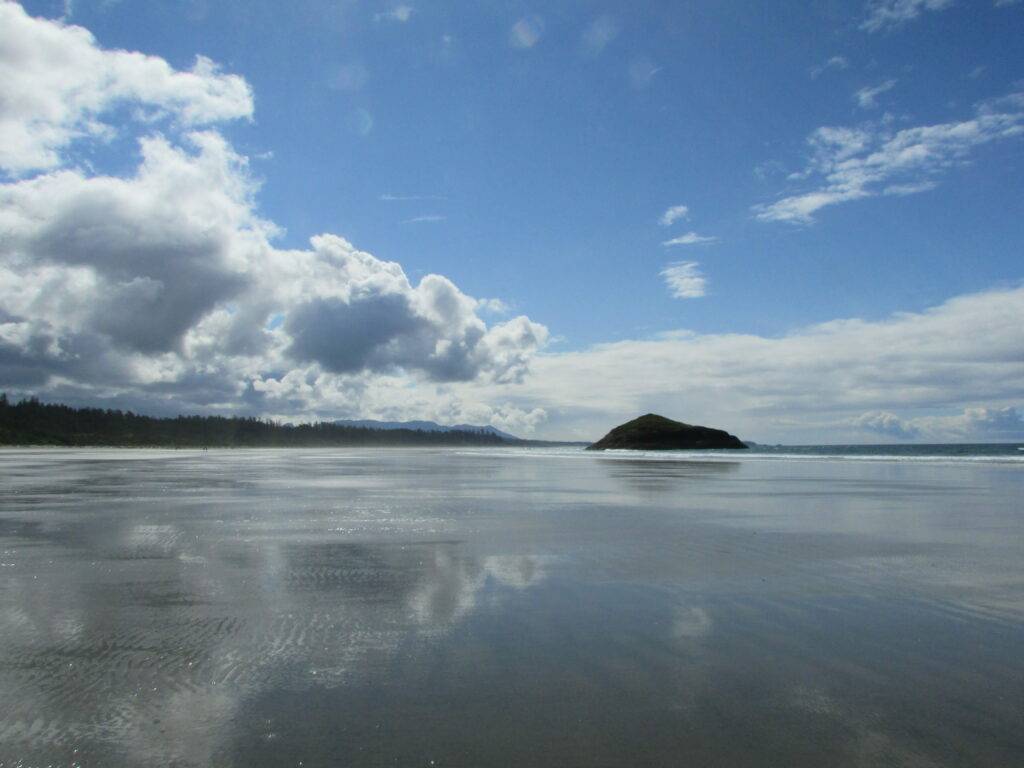 I am on a mission. I have a week to travel from my Canmore, Alberta, home to Tofino, British Columbia, and back, collecting enough ideas and materials for my next book. I am also a notoriously cautious and usually broke adventurer. A whale-watching excursion isn’t in my budget. Setting off solo on the West Coast Trail or Wild Pacific Trail while wrestling with tide charts, wet gear and all my numerous outdoor fears is also not on this itinerary.

My hatchback rattles alarmingly over the great mountain passes, and forests change from coniferous to deciduous as I descend to the valley bottom. I’ve left my winter tires on. If you have never driven the Coquihalla highway in a snowstorm, it truly is the adventure of a lifetime! It is, however, 38°C (100°F) as I refill with drive-through caffeine in Kelowna. Truckers race their screaming 18-wheelers around me, and I’m convinced my tires are on fire. 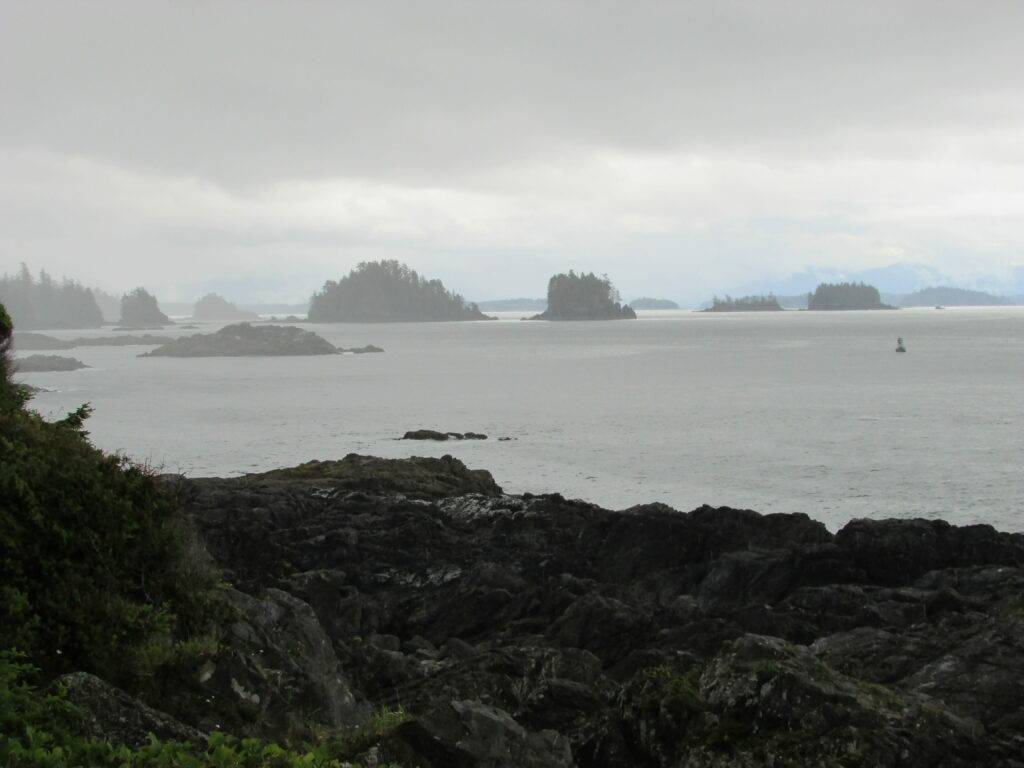 Put me in Kathmandu or Reykjavik, and I can find my way around like a stray cat, but after getting hopelessly lost in Vancouver for hours, ending up in tears somewhere in kitschy-cool Kitsilano, I make it to Granville Island with just enough time for a quick stroll. I take in the jaw-dropping selection of produce available at the Public Market, caress hand-dyed linens from Maiwa’s eclectic textile collection, and wish I had time for a glass (or bottle) of Okanagan wine on a seaside patio, but I have a ferry to catch.

My first stop on Vancouver Island is the Shaw Centre for the Salish Sea in Sidney, where electric jellyfish pulse like disco lights, and crabs and scallops play hide and seek in coral while an octopus turns from sunrise pink to storm cloud grey. I am delighted by the unexpected sandpaper texture of starfish. I check out the houseboats at Victoria’s Fisherman’s Wharf, then tuck myself into the window nook at Murchie’s, with scone fortification, before tackling Munro’s and Russell Books.

A carefully curated independent bookstore can give me incredible insight into what locals treasure. I emerge hours later with bagfuls of recommendations into a bone-chilling drizzle. I trace a ribbon of road on my road map, looping from Victoria to Sooke to Nanaimo along Juan de Fuca Provincial Park, and with windshield wipers exercising at Olympic qualifying speed, I am blissfully unaware of the perils ahead.

Twisting along rugged coastlines, inlets and blind hairpin turns, the Pacific Marine Circle Route has already claimed two tires on one unfortunate RV. With gas needle hovering above empty, I arrive in Port Renfrew, the south gate of the West Coast Trail. I like to imagine I’m the kind of person who could confidently conquer this gruelling trail’s formidable ladders, ziplines and slippery log crossings while enduring the discomforts of torrential rain, but as I watch the few drenched backpackers coming off the trail, I know, in this case, that I am not. 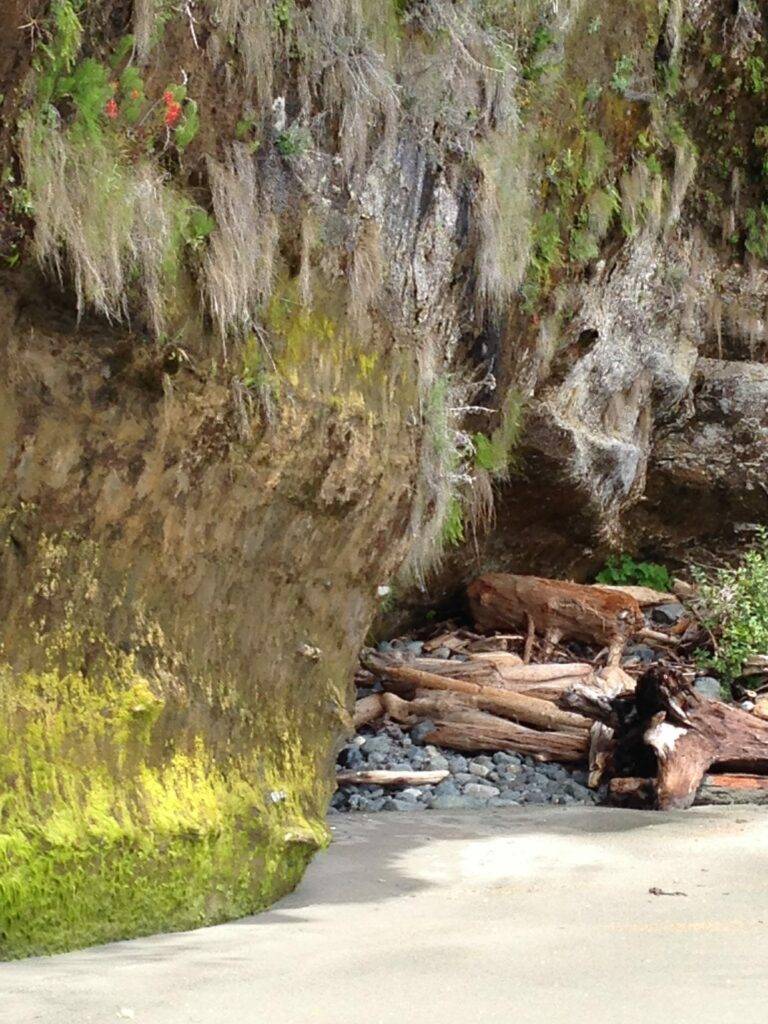 I pull into the marina, where a handwritten sign on a rusty gas drum shouts “MINIMUM GAS PURCHASE $5, CASH ONLY!” After a desperate search of wallet and car, I have just enough.

The forest ends abruptly with the unmistakable smell of freshly cut trees as I cross the heart of the island. Mist hangs like ghosts above stumps clinging to naked mountains. I cannot fathom the hardships of island economics and the complexity of lumber markets and forestry politics that caused these marks. I shiver and accelerate. 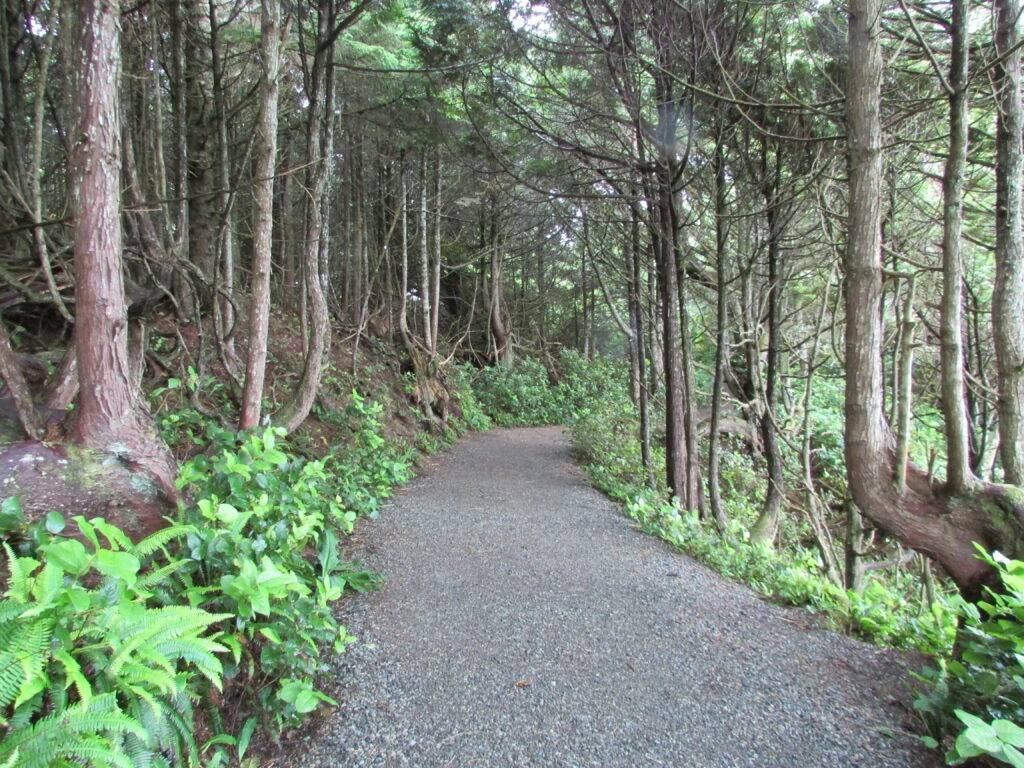 After securing an ocean-view campsite the next day in Tofino, I devour “killer fish tacos” at SoBo and drift into the Eagle Aerie Gallery. The artwork of Roy Henry Vickers is breathtaking, a sacred celebration of the deep ancestral connection that First Nations people feel toward their land.

As a self-proclaimed mountain goat, I understand the pull of mountains, and how glaciers and chinooks shape a person’s soul. But the primal attraction that many feel to water is foreign to me. Where the ocean crashes against coast, I walk for hours over the next few days. Mesmerized by the rhythm of tides and the pull of the moon on water, I imagine early humans gathering around driftwood fires, pondering this mystery late into the night. 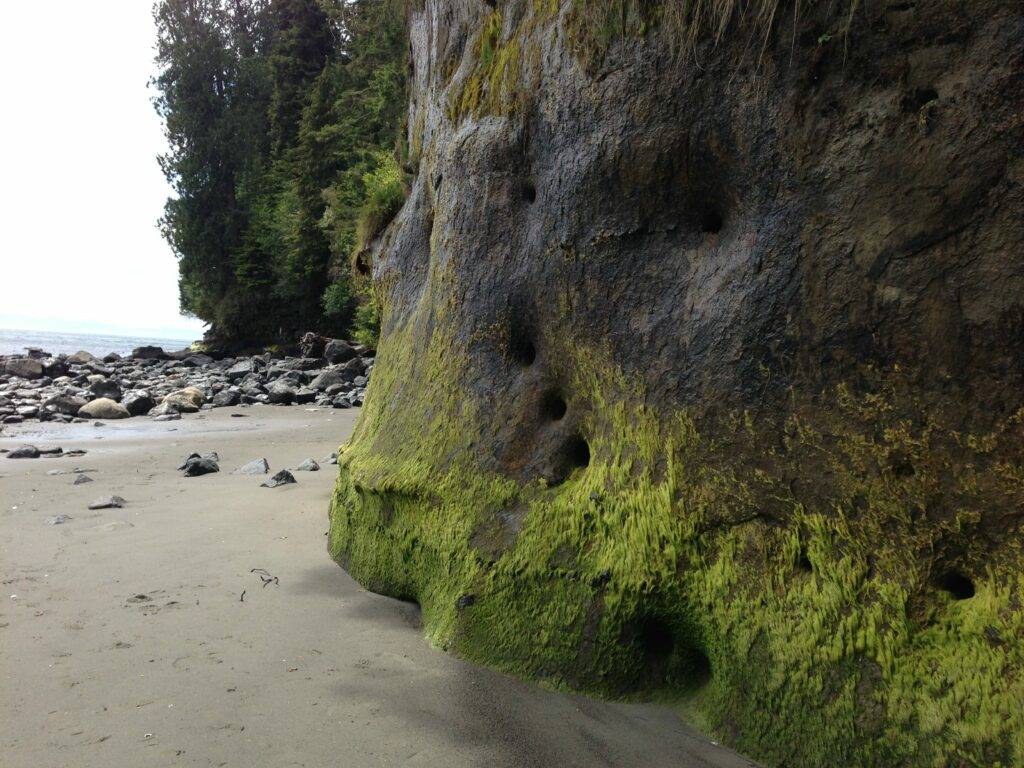 My sketchbook fills with the curve of beaches, the sounds of rainforests and the dreams that come from sleeping by the ocean. I know as I head home that I will hear the waves every time I draw for months after this trip. I have my story.