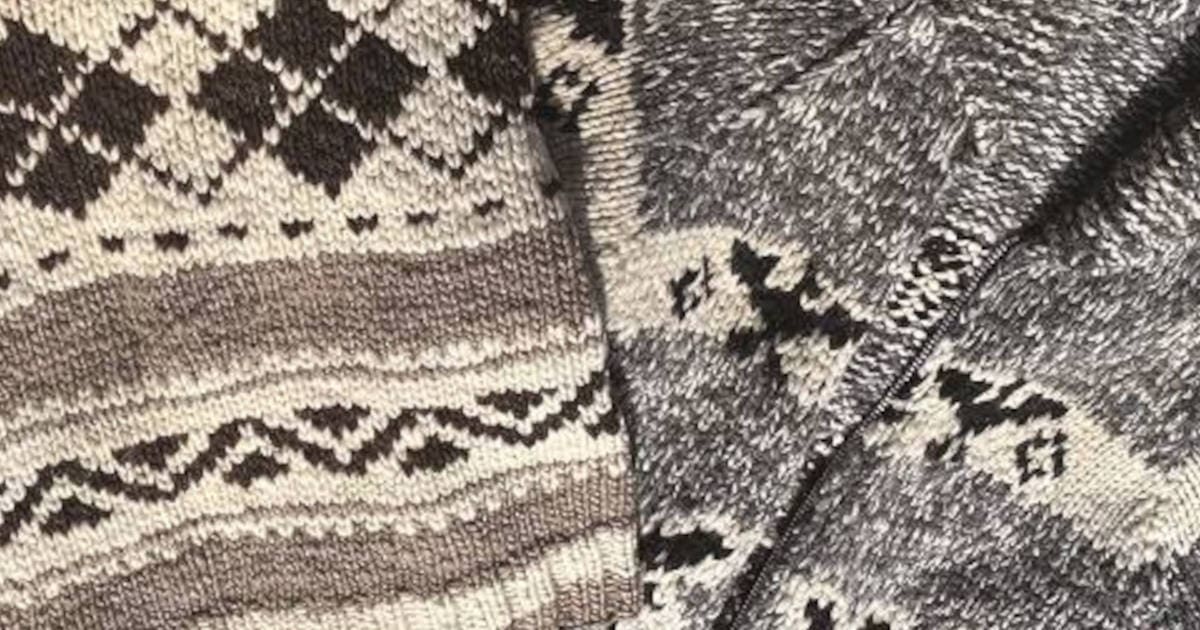 Perhaps you’ve been to Cowichan Lake or Cowichan Bay.
By Madeleine Hague

When you hear the name Cowichan, perhaps you think of the beautiful Cowichan Valley on southern Vancouver Island, or the largest First Nations band in British Columbia, part of the Coast Salish people. Perhaps you’ve been to Cowichan Lake or Cowichan Bay.

Yet, if you’ve ever worn a Cowichan sweater, you will be familiar with a wonderful, warm, woolly, weatherproof garment. Those of us lucky enough to own a Cowichan (anglicized from Quw’utsun’, meaning “the warm land”) sweater possess a truly iconic piece of Canadiana.

The Cowichan sweater is what is known as an acculturated art form, as it includes knitting­—a European tradition—with Salish spinning and weaving methods. Before European contact, the Coast Salish people wove blankets, leggings, matting for tent material, and bedding from mountain goat wool, dog hair and plant fibres. Archeological records show that the art of weaving was well established by 1500. The natural oils in the fibres kept people dry in the famously wet weather on Vancouver Island. These fibres were spun on a spindle, while weaving took place on a two-bar loom.

In the 1850s, as settlers (many from Scotland) came to live in the Cowichan Valley, sheep were introduced to the land and Cowichan women and girls learned to knit, starting off with small items such as socks and mittens. From there, they began to knit knee-length underwear and sweaters. Unlike Scottish sweaters, Cowichan sweaters were knit in the round, with no seams, using multiple needles. These early sweaters were one colour with a turtleneck, but over time Cowichan knitters began embellishing sweaters with motifs based on Fair Isle patterns—traditional Scottish designs from that northern Scottish island. Over the decades, new technologies, tools and patterns evolved. In 2011, the Government of Canada designated both the Coast Salish knitters and the Cowichan sweater as an event of national historic significance on the advice of the Historic Sites and Monuments Board of Canada.

Unlike modern Scottish sweaters, a true Cowichan sweater is hand-knit with thick, hand-spun, one-ply natural yarn. Don’t be fooled by imposters! Cowichan sweaters have become fashionable in recent years, and copies have been made in overseas factories. Coast Salish people, including a Cowichan chief, have taken action to prevent the term Cowichan sweater from being used by anyone who is not a Salish knitter. In 2015, the Nordstrom Company removed the term Cowichan from its catalogue after being contacted by the media. In that same year, Ralph Lauren used the word Cowichan in his collection—and, again, he was pressured to remove it.

I was 24 years old when I purchased my Cowichan sweater and tam in Duncan, British Columbia, about 61 km from Victoria, at an outdoor Saturday market. There were lots of sweaters, many with the classic thunderbird motif, but the one I chose had a stylized argyle pattern—argyle being a classic Scottish pattern. At the time, I had no idea that Scottish culture played a role in the development of the iconic Canadian sweater. And while I won’t tell you how many decades ago I bought that sweater and tam, I’ll happily share that I still wear them. They show no signs of wear and really are water repellent, lightweight and warm.

Looking for an authentic Cowichan sweater? Check for these features.

Madeleine Hague has had a connection to Harrowsmith for over 20 years. A longtime urban dweller, she moved to the country in 2012, where she is still getting used to having a garden larger than 15 feet wide! Between April and October, Madeleine and hubby Mike are kept busy with a wildflower garden, chickens, bees and tending their potatoes, garlic, lettuce, beets, kale, tomatoes, sunflowers, pumpkins, squash, peppers and beans. Madeleine has also been our Small Ponds people finder for the past 11 years and acts as a Recipe Ranger, helping readers find recipes from back issues. She lives in North Halton, Ontario.

Why We Love Manitoba