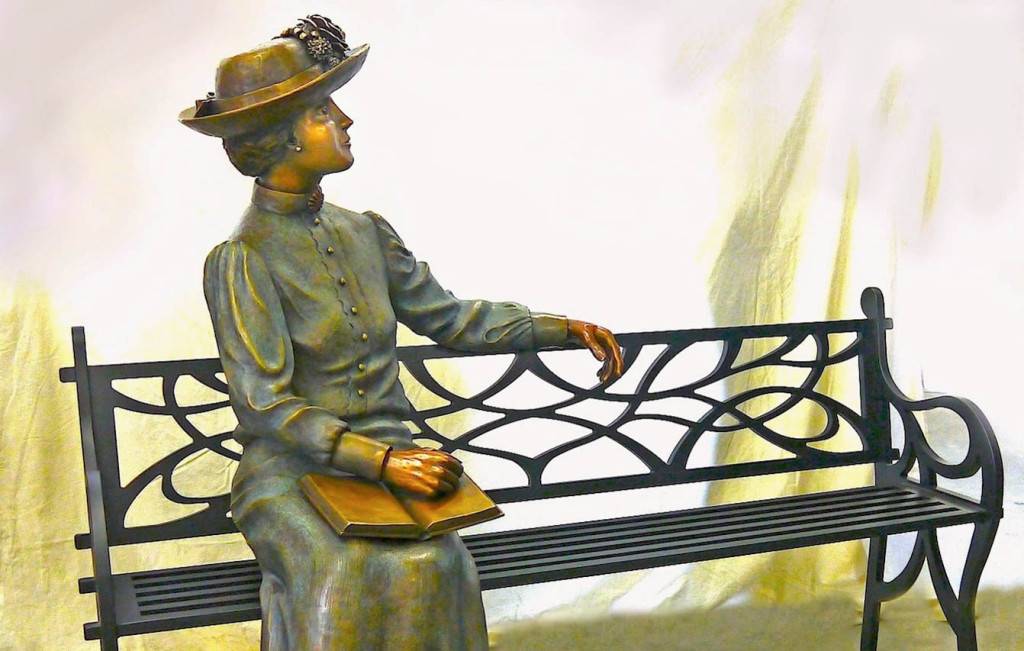 Lucy Maud Montgomery actually spent much of her life in Ontario, even if P.E.I. remained her setting of choice.
By Maurice Crossfield

While most Canadians associate Lucy Maud Montgomery with her native Prince Edward Island, a life-size bronze statue in the garden of her southern Ontario home in Leaksdale reminds us that much of her writing was done on the mainland.

Unveiled in June 2015, the statue depicts Montgomery sitting on a bench in her garden at the manse of the Leaksdale Presbyterian Church, where her husband, Ewan Macdonald, preached between 1911 and 1926.

With her first novel, Anne of Green Gables, already published, Montgomery was warmly welcomed by the prosperous farming community north of Uxbridge. She would write half of her 22 novels in between the demands of raising her two sons and playing the role of a minister’s wife. She also greatly enjoyed her garden as a place of quiet contemplation.

Born on the Island, Maud, as she was known by friends and family, was raised by her grandparents Cavendish, P.E.I, in what has since become known as the setting of her Anne series. She became a schoolteacher, but gave that up when she married at age 36.

In addition to her novels, she published 530 short stories, 500 poems and 30 essays. She also kept extensive journals about her life and times. Anne of Green Gables has since sold over 50 million copies and been translated into 20 languages. In 1935, she was named an Officer of the Order of the British Empire for her contribution to literature.

Montgomery would never return to P.E.I. to live. After she died in Toronto in 1942, her body was returned to the Island.

In the early 2000s, the Lucy Maud Montgomery Society of Ontario restored the Leaksdale manse and gardens. Both it and her childhood home in Cavendish are National Historic Sites.

The bronze statue, created by artist Wynn Walters, is now on permanent display in the garden. For more on the Lucy Maud Montgomery Society of Ontario, go to lucymaudmontgomery.ca.