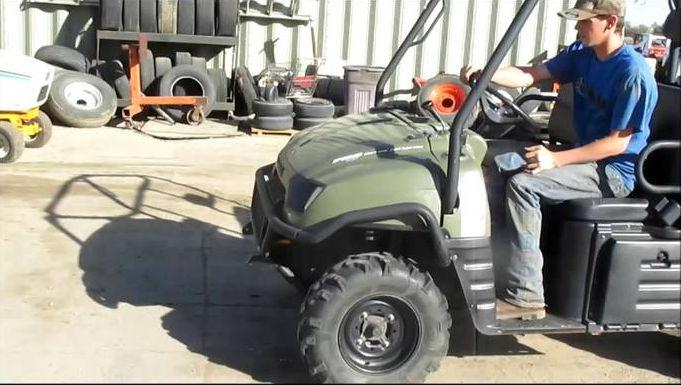 Neighbours may hate them, teenagers may love them and landowners may find that they can’t do without them, but regardless of where you stand on the spectrum, there’s no denying that all-terrain vehicles have become part of the fabric of rural life. In many parts of the country, it’s not uncommon to see landowners touring […]
By Maurice Crossfield

Neighbours may hate them, teenagers may love them and landowners may find that they can’t do without them, but regardless of where you stand on the spectrum, there’s no denying that all-terrain vehicles have become part of the fabric of rural life.

In many parts of the country, it’s not uncommon to see landowners touring their property aboard an all-terrain vehicle (ATV) or perhaps the increasingly popular side-by-side vehicle (SSV) or utility terrain vehicle (UTV). Faster and more agile than a tractor, they have evolved a long way from their ancestors.

Not content with the early Jeeps or off-road motorcycles that appeared after the Second World War, backyard mechanics and aspiring entrepreneurs alike worked on any number of contraptions. Some vehicles, like the Terra-Jet, Jiger and Argo, featured a combination of all-wheel drive and the ability to float, allowing them to face just about anything Mother Nature had in store.

Then came Honda’s first three-wheeler in 1970, based on farm-to-town vehicles cobbled together in rural Japan the previous decade. The other Japanese motorcycle companies, Yamaha, Suzuki and Kawasaki, were quick to produce models of their own. The four-wheel ATV, with its improved stability, wasted little time replacing its older brother and bringing true mass-market appeal.

But while those early models were used mainly to tear up the trails here in North America, by the 1990s ATVs were increasingly being pressed into service as working vehicles. They can go places that trucks and tractors can’t, and they can haul a surprising amount of gear. Plus, they can dependably get the rider back home at the end of the day. In many remote Canadian communities, ATVs easily outnumber cars, as they’re a three-season alternative to the snowmobile. With available track systems that bolt on in place of the wheels, one could even put the snowmobile out to pasture for good.

There’s also the fact that an ATV easily costs less than half the price of a new tractor. Mind you, once dressed up with the various bells and whistles, an ATV is still a significant investment.

Back in 2010, an ATV industry expert told Harrowsmith Country Life, “Typically, they buy an ATV for the fun of it. Then they find out how useful it can be.”

More recently, the UTV has entered the scene, offering room for a passenger, a roll cage and even a box on the back for hauling gear. Equipped with a steering wheel, a brake pedal and gas, the UTV’s car-like handling has brought the fun and utility of off-road vehicles to a new generation. The price has once again bumped up a bit, and a higher-end model will cost as much as a compact car.

But the UTV will do much more than the car ever will. Equipped with most of what you’d find in a car, it can wallow in the mud, skid logs, pull trailers and even be fitted with attachments to plow snow, mow grass and split logs. More work-oriented UTV models, like the Kubota RTV 900, John Deere Gator XUV or Kawasaki Mule, come with diesel engines for low-end pulling power and excellent fuel economy. Meanwhile, the Yamaha Viking boasts seating for six, so you can bring the entire work crew. At the other end of the spectrum are models such as the Yamaha YFZ1000R, which offers all the off-road speed and fun you imagined a dune buggy could provide.

Despite all this, there have been some growing pains along the way, usually when ATV and UTV enthusiasts bump up against hikers and landowners with a marked preference for peace and tranquility. Enforcement tends to be a bit of a rarity, and when pedestrians and high-speed ATV riders meet up, it doesn’t always go well.

Young people are the greatest safety risk. The Canadian Paediatric Society says that 34 percent of ATV injuries are among kids under age 19, with the highest concentration in the 15- to 19-year-old range. In Alberta, between May 1 and July 26, 2014, two kids died in ATV crashes, and 38 people under age 16 were injured.

With ATVs, rollovers continue to be the single largest source of serious injury. ATVs can be very stable at low speeds, but they but ATVs aren’t sports cars—crashing into trees and other stationary objects often results in broken bones, and sometimes riders are even thrown, crushed or pinned by their machines. And although UTVs may give the impression that they’re stable, they tend to be top heavy.

Regardless of where you stand on the use of ATVs and UTVs, they have become as much a part of rural living as the farm tractor. They’re here to stay, and the key is to enjoy them responsibly while always remembering the value of having good neighbours.