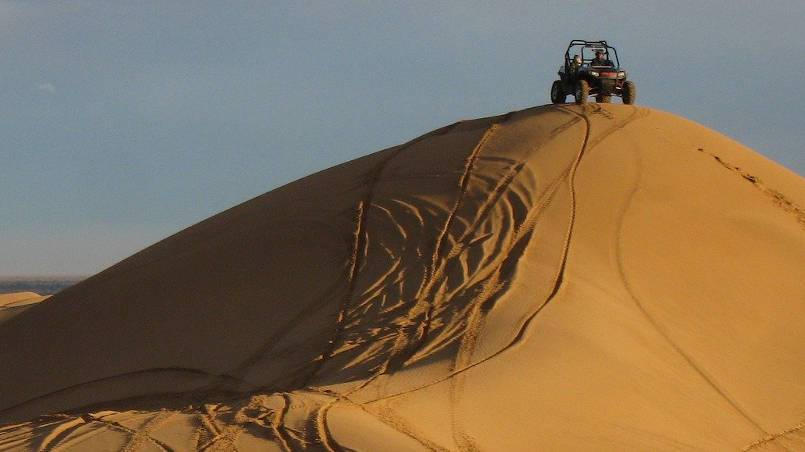 An ATV is all play and no work, right? Not any more. Indeed, an ATV can hold its own doing chores on the farm.
By Tom Cruickshank

It was a surprise for me to learn that, despite their reputation as a thrill ride, all-terrain vehicles were actually conceived as practical transportation. They were invented in the 1960s in Japan, where they found a market as a farm-to-town vehicle in isolated communities. But something happened on the way across the Pacific Ocean: Here, ATVs have always been more of a race horse than a work horse and as the ranks of joy-riders swelled—worldwide sales top a million units per year—there seemed to be an equal number who looked askance at these noisy, very un-green trail-mobiles.

But even the naysayers might have reason to change their tune: In fact, some country dwellers who used to swear at all-terrain vehicles now swear by them. That’s because the ATV has a practical side, heretofore underestimated. Indeed, some say it’s more useful on the hobby farm than a tractor.

Consider this: More agile and more compact, an ATV can go where a tractor can’t. It can get there much, much faster. It has just as much horsepower. It costs less than half the price of a new tractor. That’s why many country dwellers are looking at ATVs in a new light. Typically, folks buy an ATV for the fun of it; then they find out how useful it can be.

It’s all a matter of accessories. An ATV can be equipped with any number of attachments: an auger for drilling post-holes; a blade for grading or clearing snow; a mower to trim unruly trails; a plow for tilling fields; and best of all, a front bucket that can tote dirt or any other heavy loads. Likewise, a hitch at the rear makes an ATV useful for dragging fire logs out of the woods or any other towing function. Many people are completely unaware that there’s more to ATVs than riding the trails, so it’s a big surprise to learn how many practical attachments are available.

A “real” farmer would never give up his Massey-Ferguson for an ATV. “You’d never be able to tow a heavy hay wagon or grain bins with one of those things,” said one who live near me. “They’re just too light.” Nevertheless, he owns one. “If I have to go out and check the cattle in the back pasture anyway, I might as well have fun doing it.”

Even more practical than an ATV on the hobby farm is something called a UTV or “utility vehicle.” That’s what I quickly learned when Yamaha loaned us one of each and turned me loose on our acreage last summer. I played with the ATV some—in fact, more than I would have guessed—just to see what all the fuss is about. And while it was fun to bomb around our back forty, the UTV came in handy almost every day. If I had to choose, it would get the nod hands down.

A UTV is to an ATV what the more civilized SUV is to an open Jeep runabout. It uses many of the same mechanical components—and even has four-wheel drive—but sacrifices fun for function. While ATVs were conceived as recreational vehicles with a practical side, UTVs are work first and play second. Driver and passenger sit side by side. The passenger compartment is cocooned in a roll cage. Best of all, a UTV has a cargo bed with a lever-operated dumping mechanism. It sure was handy to have when carting a couple of bales of hay out to our sheep, hauling compost from the manure pile to the garden and for excavating soil for a patio at our front door (photo, page 307). True, I could have used my pickup for any of these tasks, but the UTV really proved itself one day when I needed to haul a load of firewood from our back back forty, where I had cut some maples last spring. To get there meant driving through a notoriously wet, low-lying section that my truck couldn’t hope to navigate (even with four-wheel drive), but it was easy work for the UTV. I began to realize why there’s a growing market for these things.