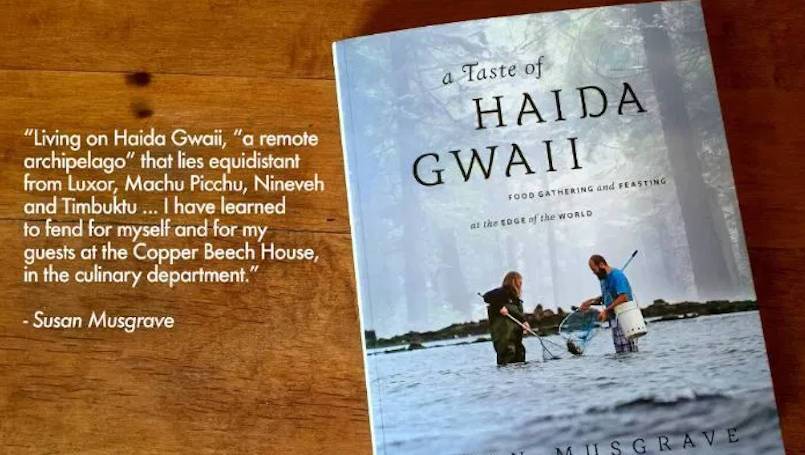 Musgrave runs the Copper Beech guest house there. She often spices up her homecooking with hints, accompaniments and condiments made from the native ingredients of Haidi Gwaii, foraged from the sea, meadows and forests nearby, or, more often as not, dropped on her doorstep by a grateful neighbour.
By Wayne MacPhail

Susan Musgrave is a Canadian author of children’s books, fiction, non-fiction an poetry.

Her poetry is honest, sensual and is punctuated with food imagery that sometimes is artfully blended with her jubilant sexuality.

So, it should come as no surprise that Musgrave, a resident of Haida Gwaii, has produced a cookbook called A Taste of Haida Gwaii- Food Gathering and Feasting. It’s not so much of a cookbook as it is a food memoir, really.

The thick, opulent and wonderfully witty text is a celebration of the foraging life on her home island, formerly known as the Queen Charlotte Islands.

Musgrave runs the Copper Beech guest house there. She often spices up her homecooking with hints, accompaniments and condiments made from the native ingredients of Haidi Gwaii, foraged from the sea, meadows and forests nearby, or, more often as not, dropped on her doorstep by a grateful neighbour.

I recently had a chance to talk with Musgrave about her book, her love of wild food and her foraging adventures via Skype.

The Sound of Haida Gwaii

Makes 3–4 dozen, depending on size

“Thank you for making the best Welsh cakes I’ve had outside of my Gran’s kitchen. You run a wonderful house and the welcome you give travelers can’t be forced. My wife has endured two days of me talking about nothing else except Haida Gwaii and the people I met. She knows the islands pretty well but is now resigned to cancelling all our overseas trips indefinitely, so that we can concentrate on coming back to Haida Gwaii instead. Personally, I blame the Welsh cakes you made.”

I have been trying to find a way to connect Wales with Haida Gwaii, but I can’t. I don’t even have any Welsh ancestors. But the testament quoted above, from a guest at Copper Beech House, I feel allows me to include one of my favourite recipes in this book. I make these for breakfast, but also for afternoon tea. Welsh cakes are so named because they are traditionally cooked on a bakestone or a cast iron griddle. They are flat like a thick pancake, as flaky and dense as a scone, and as toothsome as a cookie. The mothers and miners’ wives of Wales used to make Welsh cakes—also known as bakestones, griddle cakes, Welsh tea cakes and Welsh miner cakes—for their children to lunch on at school and their husbands to take down into the mines.

I started making Welsh cakes when I moved to Port Clements in 1971 . I had Bee Nilson’s The Penguin Cookery Bookand, well, it’s what I had, in those days. I still own the book, though it is missing both covers and everything after page 326 , but this is where I learned to make Girdle Scones, “a traditional and popular fayre.” I always suspected “girdle” was an allusion to the uncomfortable undergarment women wore in less liberated times. You cannot eat just one Girdle scone. Especially when they are so small. You probably eat six. And then your girdle gets tight. You can see where I am going with this.

Welsh Griddle Cakes have received attention in the media recently because Ann Romney, wife of Mitt Romney the Republican nominee in the 2012 U.S. presidential election is apparently a fan; Mrs. Romney’s father hails from Wales. She has been serving Welsh Cakes on her husband’s campaign bus. Please do not let this stop you from trying these. Just close your eyes and—think of Wales. Not politics. Or girdles.

Where in the World is Haida Gwaii?

The Espresso Institute of North America

Canadian Ceviche; while it may be light, it’s heavy on flavour