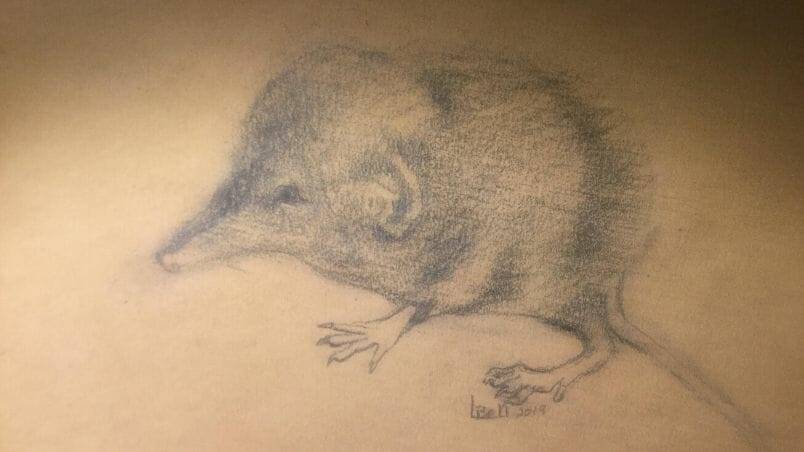 The morning of the blizzard was the first time we saw the shrew. My fifteen year old son was in the living room admiring the warmth of our much needed masonry heater when a very fat toy like creature bounced and zoomed through the room.
By Lesley Schatz

The morning of the blizzard was the first time we saw the shrew. My fifteen year old son was in the living room admiring the warmth of our much needed masonry heater when a very fat toy like creature bounced and zoomed through the room. The dark velvety ball seemed fat and jerkily robotic as it snuffed and hunted the area for crumbs.

I luckily caught a glimpse of what appeared to be the fattest shrew I’d ever seen, roily – polling around like a mini vacuum.

Shrews are amazing beings with roots going back to the earliest mammals. At the dawn of the mammal age, shrews were there almost in the same form they are now with their long noses, tiny frames and a voracious appetite. Some have a poisonous venom which paralysis their prey enabling them to hunt much large creatures such as snakes, mice and other shrews. Survival is their passion and although they may end up in your house, they will not breed there and your crawl space will be free of insects.

Stemming from the fact that the shrews are insectivores , the University of Regina Encyclopedia claims; “The order Insectivora, which includes the shrews (family Soricidae), is the oldest living order of placental MAMMALS. Shrews (about 290 species) are found worldwide, except for Australia, southern South America and the polar regions”.

The facts are there. These little guys are survivors! Currently our little house dweller has avoided the cat for over a month. We are helping his survival efforts by terrorizing the poor Kitty every time she tries to come into the living room . Her territory has been reduced to the upstairs where she has another wood stove, food, water and kitty litter.

My son and I spend our evenings entertained at the same time each cold winter evening by the energetic ramblings of the crumb searching Soricidae. We happily listen to the smacking of his voracious jaws when a morsel has been found. It is amazing how loud the satisfactory smacks are!

I have begun to leave the vacuum hose in pieces on the floor with the ends partially covered with wood blocks so the tiny beast has escape routes in case the kitty sneaks down to shrew domain.

I actually hope they never meet as after researching these little guys, I would almost feel sorry for the cat…although she does seem to take perverse pleasure in tackling our fierce and valiant outdoor voles who put up a great fight , standing on their hind legs and latching onto her feline nose. Voles, shrews and moles are three of my favourite creatures and even though my garden’s root crops and apple trees are routinely decimated, I still have a special affinity for them…especially for little crumb seeking cute ones!

As the research proves;

Shrews are very small, with none being longer that 5 cm and 180 g; the lightest mammal in the world, at about 2 g (mass of a penny), is a shrew. Their small size leads to one of their chief problems, that of heat conservation and high metabolic rates. They need a continual source of energy (namely food) to keep warm and alive. They do not hibernate, and how they procure food during the cold parts of the winter is mostly a mystery (sourced 12/07/2013).

So each evening, with the weather dipping to minus 35, instead of turning on the television or checking our Facebook pages, my son and I marvel at the minuscule bit of resiliency before us and our problems and worries disappear. The powerful statement of survival since the beginning of the mammal era trumps our petty problems and the miracle of our Christmas shrew allows us a glimpse into the extraordinary beauty of life; a gift that we share with all creatures on this earth.

Merry Christmas everyone and remember to respect and share the planet, even with the oldest order out there, the Soricidae.

Lesley Schatz is an artist (BFA; ACAD, 2010) and musician with 5 CDs on Bear Family Record’s.  As well Lesley studied Cree language and later obtained a Master of Education in Land Based Learning in 2012 from the University of Saskatchewan. A mother of 4 and new Grandmother of two!, Lesley lives on her own farm with her stock guardian dog, Oki.

Her other publications include an academic paper for Community Diversity, An article entitled Home is where the Hearth is for Harrowsmith and several short stories and poems for other publications. Lesley is a songwriter who has had world wide recognition and continues to have concerts as well as art shows.