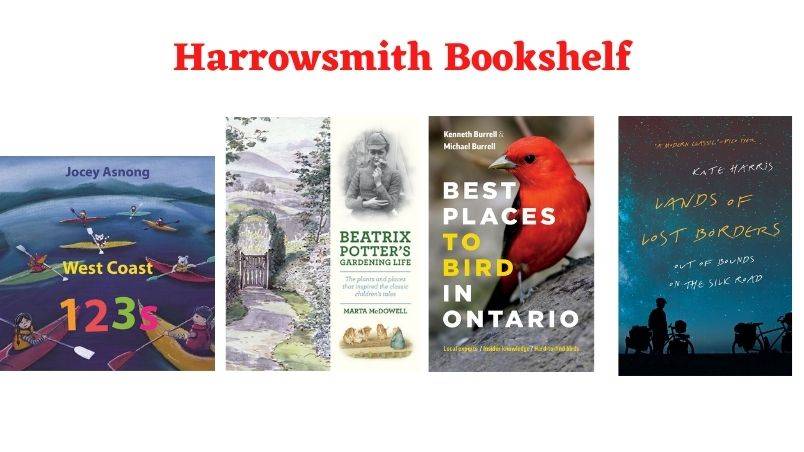 Books we love at Harrowsmith Magazine
By Jules Torti

Best Places to Bird in Ontario

This book is like finding your kid sister’s diary but better. All the best birding epicentres are shared in a moving open journal by brothers Kenneth and Michael Burrell. They are birders with enormous binocular cred. Kenneth is an active member of the Ontario Field Ornithologists, volunteers with eBird and has both a bachelor’s and master’s degree in environmental studies degree from the University of Waterloo. Michael, in a similar vein, obtained a bachelor of science from Trent University and a master’s degree from the University of Toronto. He has conducted fieldwork with Bird Studies Canada and the Ontario Ministry of Natural Resources and Forestry.

If you’re hoping to track down elusive species like the American three-toed woodpecker and the yellow-billed cuckoo, you’ll want to lean on the bros. While some might balk at the suggestion of poking around the sewage lagoons in Kincardine, true birders will delight in learning that 225 species have been documented there.

Ontario is one of the most active birding communities on the continent, and destinations like Rondeau Provincial Park offer staggering waterfowl counts for listers. Want to tick off the prothonotary warbler? The best spot in the province is on the no-longer-secret Tulip Tree Trail.

The Burrell brothers provide helpful birding strategies, like where to park, when to go and specific directions (versus a distracted Siri). Learn where to see birds banded and about the distinct advantage of a “sightings board” in a park.

Ideal for residents, weekenders and travellers alike, Best Places to Bird in Ontario demonstrates a shared familial obsession, and the passion is obvious. While some may choose to eat a hot dog at every stadium in America, you might be inspired to hit every Burrell-approved flyway in a year. I’d suggest starting with Moosonee, where the northern hawk owls are visible from your train seat, perched on the utility poles as you chug past.

For Potter fans, Marta McDowell’s delicate tromp through the gardens of the legendary author’s Hill Top Farm in Scotland’s Lake District is a genuine treat. The inspiration for her darling characters and Mr. McGregor’s garden is evident in her childhood surrounds. Her grandparents’ 300-acre estate in Hertfordshire, north of London, England, employed 15 gardeners. Potter called it “the place I love best in the world.”

For Potter, an awkward and shy teen prone to fainting, headaches and rheumatic fever, her sanctuary and healing was found in a paintbrush and pen. “Botanizing” dominated her day in her 20s as she bagged insects, dug fossils and studied animals. Her bible (a gift from her grandmother) was Sowerby’s British Wild Flowers. Her father taught her photography basics, and she moved from preparing skeletons of departed pets to studying mushrooms and lichens, almost exclusively.

Potter’s artistic wanderings expanded to publishing holiday cards. It wasn’t until she found a new audience in her governess’s children that she began writing down stories and sending pen-and-ink tales to four-year-old Noel. He was the first to be introduced to Flopsy, Mopsy and Peter Rabbit. At the urging of her governess to publish her stories, Potter took matters into her own hands after several rejection letters. She self-published The Tale of Peter Rabbit in 1901 and it sold out.

A publisher finally championed her work and requested colour illustrations, which introduced her familiar orange nasturtiums and red geraniums. She mentioned horticultural prescriptions like parsley in her storylines when Peter felt sick after binging on French beans and carrots. Potter went on to publish one or two books a year, exploring water plants in Mr. Jeremy Fisher and documenting her uncle Burton’s home in North Wales as the setting for The Tale of the Flopsy Bunnies. It was a productive but not tidy garden of currant bushes and apricots that she showcased.

Ever the entrepreneur, Potter introduced spin-off merchandise and designed toys, china and wallpaper to fund her garden efforts. She sold conifers to Christmas tree dealers. By the 1920s, she owned Hill Top, Castle Farm and the fruit orchards of Courier Farm, growing Worcester Pearmains and sour crabapples for preserves. She bought Troutbeck Park Farm (2,000 acres) and tended to a Herdwick sheep herd. Potter was even elected president of the Herdwick Sheep Breeders’ Association.

As much as this book serves as a seasonal notebook informed by Potter’s writing, art and photos, it’s also a gorgeous documentation of her accomplishments and curiosity. She was an activist and protested the proposal of a local airplane factory and a road widening through daffodil fields. She died in 1943, at age 77, leaving a legacy of words, images and land (she donated 4,000 acres to the National Trust).

Her gardens, and the plants she loved, appear in her passages, and for those keen to recreate those fabled pages, you’ll find the checklist you need. From sea thrift and Candelabra primroses to orchid cacti and Queen of Bourbons roses, you can have your very own Hill Top Farm. Or enjoy the meandering, colourful and historical walk through Marta McDowell’s literary garden.

Lands of Lost Borders: A Journey on the Silk Road

Fall is a universal time for reflection, and memoirs like Lands of Lost Borders lend well to the shift in seasons. Maybe it’s an internal twitching that is instilled by the start of the school year (no matter your age) and a need to explore something new. Why not hop on the handlebars of Kate Harris’s bike? Her formulative years were spent in “a few acres of cedar forest and swamp north of Ballinafad” near Erin, Ontario, but her head was already in the stars—in particular, somewhere on Mars. Her galactic dreams to be a real-life astronaut were semi-grounded after a simulated two-week space mission to the red planet in Utah. Was she chasing the wrong dream?

Harris had confidently realized she could issue her own ticket to Mars or elsewhere if she “pitched the right idea to the right people at the right time,” she writes. This savvy tactic had already allowed her to track Sumatran rhinos in Borneo and follow wild horses through the Gobi Desert in Mongolia. She landed a research assistant gig in the McMurdo Valleys of Antarctica, all thanks to her persuasive ability with words and her compelling need to see and feel more of the world.

What’s telescopically clear from the get go is Harris’s restlessness, a trait that is DNA-deep in her family. Despite her dedicated time logged at Oxford University and MIT on an “educational bender,” her inherent need to go rogue and design her own map is palpable. She finds a yin to her yang in elementary school bestie Mel Yule, a social scientist and enduro athlete, and they strike off to revisit the Silk Road that they’d started five years before. Candidly, Harris acknowledges her reality. She was “rich in unemployable university degrees, poor in cash, with few possessions to my name besides a tent, a bicycle and some books.”

Lands of Lost Borders is an intense 10,000-km-long lesson in geography and cultural literacy. There’s a fierce determination throughout from the chronic rain and roadkill of the Black Sea in Turkey to the road’s end in the Indo-Gangetic Plain and Greater Himalaya. The joy found in a small square of chocolate or scrumped apricots in the shade is tangible. The “mean to murderous heat” near the Nurek Reservoir and defeating headwinds of the Tibetan Plateau are felt in tandem.

This is what I can promise: Harris will take you on a wildly turbulent ride of reflection and soul seeking. It may just inspire you to unfold a new map and follow your own Silk Road.

In spring 2019, author and bonafide doodler Jocey Asnong was honoured at the 15th anniversary of the Mayor’s Spotlight on the Arts celebration in Canmore, Alberta. The award recognizes the contributions of talented individuals to the community’s literary arts scene. Asnong is the first to admit that she was raised “by a pack of wild pencil crayons in a house made out of paper and stories.” It’s evident. The Sheridan College grad is the brilliant creator behind four Nuptse and Lhotse adventures that see her curious cats exploring Nepal, Iceland, the Rockies and the West Coast. Asnong recently coloured outside the lines with three clever books designed with the younger kid set in mind: Rocky Mountain, West Coast ABCs and West Coast 123s.

West Coast 123s is a 6 1/2-inch-square early concept board book, and it’s nearly edible, not just for teething toddlers but also for adults who love whimsy and daydreaming. Her illustrations serve as a beautiful introduction to marine mammals, birds and magical places like the Great Bear Rainforest and Desolation Sound. Travel effortlessly from Sooke to Haida Gwaii with spawning salmon, bobbing houseboats, sea wolves, starfish and snowboarders. Counting to 20 in Asnong’s signature radiant West Coast style, is way cooler than counting sheep!