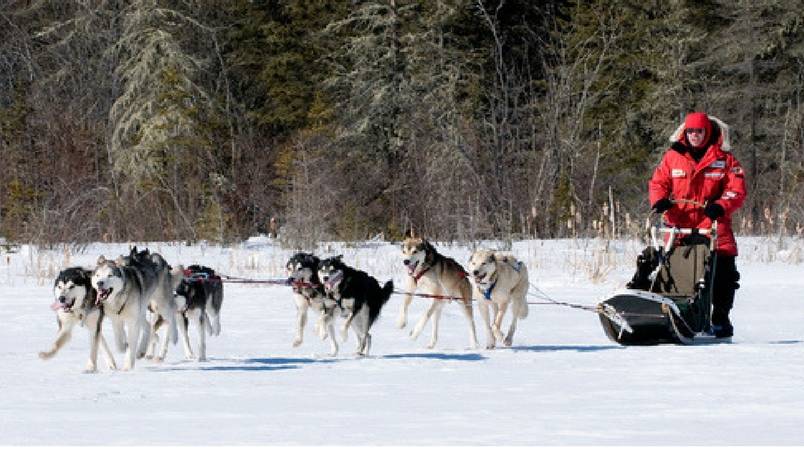 On a mid-March morning, Brad and I are in the Sundogs kennel yard, selecting dogs for the first run of the day. I feel a shiver of anticipation. The dogs are an arresting sight against the Jack pine and the snow. Each dog is tethered to a low-slung kennel on a comfortable length of chain to ensure safety and order. Brad knows each of the 30 dogs in his yard, by name and pedigree. “I could pick my six best dogs,” he says, deliberating, “but then the run might not be as interesting.”

Working with dogs brings variety and challenge each day. An additional challenge that Brad and other northern outfitters must respond to is the impact of climate change on ecotourism. Changing weather patterns affect people’s travel decisions. The sledding season, which typically begins in December, arrived late this year—and appears to be exiting early. A mild breeze stirs the forest pines in spring thaw.

Brad, a biologist by training, has shared the boreal forest experience and taught people about sled dogs for more than 15 years. Hundreds of adults and students visit Sundogs every winter. He has trained and employed many apprentice dog mushers. Traditionally, huskies in Saskatchewan’s Far North were used to move trap lines and winter camp supplies as well as, occasionally, for sled racing. With more roads to the North and more opportunities for racing, mushers and their dogs aren’t quite so isolated and mushing is now mostly a recreational activity.
We’re in luck today, when a break in the weather means the temperature has dropped a bit. The dogs can’t work when the thermometer approaches zero: when snow begins to thaw, the dogs start to sink into the trail and have to exert more energy to pull passengers. The trail was soft yesterday, so Brad was out grooming early this morning. He must break the frozen crust that forms overnight—either that or “bootie up” every dog, so the jagged ice doesn’t cut their paws. The dogs’ safety and well-being is of paramount concern.
Sundogs offers a hands-on experience, so in opting for a more adventurous combination of dogs, Brad passes me one of his command leaders: Badger, a handsome Siberian-Alaskan husky cross. Badger surveys me coolly. Brad’s dogs are socialized well enough to be handled by visitors; however, these dogs command respect. Next, Brad selects a hard-working female leader, the eager Meow-Meow. Meow-Meow is clearly a handful. She can’t weigh more than 45 pounds, but Brad has to dig in his heels to hang on to her.
The role of the musher is like that of a sports team manager, and the goal is to take that rowdy team energy and direct it down the trail as fast as possible. A musher spends his or her first 10,000 hours, or first 10 years, trying to figure out how to get down that trail in one piece. “In the beginning, you’re as much a learner as any dog,” Brad says. “You do some reading, you put in some hours, you get some pros to help you out, but you’re going to have to make mistakes.”What kind of mistakes? Little things, like losing a boot when you’re pedaling on the sled, because you didn’t tie them on tightly enough. Big mistakes, like losing a team in the bush. “The dogs take off and go five miles,” says Brad. “Hopefully, they come back without a problem. Or they may bring the sled back in pieces.”

Mishaps can be more serious. As in, “Now that dog is tangled up, and if you don’t get her untangled, she’s going to injure her shoulder. Or the other dog will think he’s being bitten, and try to take a bite out of his neighbour,” says Brad.

Badger and I follow Brad and Meow-Meow to the staging area—males on one side, females on the other—and we snap into the picket lines. The pack howls and barks, and zippers back and forth on its chains in the yard. Brad next fetches Kodiak, another calm and collected male, who will run second in the lineup. He’ll be paired with the hard-working Solstice. Lastly, we’ll need a couple of powerhouses in the wheel: Allegro and Arcturus.
Badger and Kodiak stand patiently, the soul of husky courtesy, while I struggle with the dog snaps. I’m a little bit nervous. I’ve managed to tangle my mitts in the lines. Next comes the harness. I put the first one on backwards, threading Kodiak’s feet through the wrong webs. My fingers feel frozen, even though it’s a pleasant –5°C (23°F).
Earlier in the season, mild temperatures brought wet, heavy snow to Anglin Lake, unusual for the dry interior boreal. This region, on the edge of Prince Albert National Park, has had record-breaking snowfall in two of the last three winters. When I arrived at Sundogs, earlier that morning, Brad had been clearing the trail by snowmobile. Heavy snowfall had bent the trees almost double and frozen the tree boughs into the trail surface, making some trails impassable.
“Nature’s own pruning,” Brad calls deadfall from snow overburden. Deadfall creates extra tinder on the forest floor, which is hazardous in wildfire country. Saskatchewan, like other provinces, has seen an increase in summer forest fires. In 2015, a total of 720 wildfires burned in the province, the worst on record.
The forest where Sundogs is located was untouched by fire, but at least one sled dog outfit, farther north, shut down as the result of damaged forest. Burned tracts of black spruce and Jack pine eventually come down on the trails, creating a scene of giant blackened pickup sticks.
In addition to concerns for wildlife movement and fragmented habitat, climate change has meant extra forest maintenance throughout the year. Deadfall must be hauled away and fire breaks ploughed. Brad trims the lower spruce and fir boughs along trails before the snow arrives to avoid later damage. Willow bush, too, must be cut close to the ground to prevent sharp ends of branches from piercing the dogs’ paws if the snow cover is poor.
By the time I get my two dogs harnessed, Brad has staged and harnessed four dogs and clipped their claws. Meow-Meow is frantic to get going and bounces up and down next to placid Badger. Are we ready?
It might look like controlled chaos, Brad admits, with all the barking going on. Mushing is physically demanding work, and over the years, he has learned how not to spend his energy. “If dogs were still dragging me around like they did 15 years ago, there’d be nothing left of me,” he says, laughing. 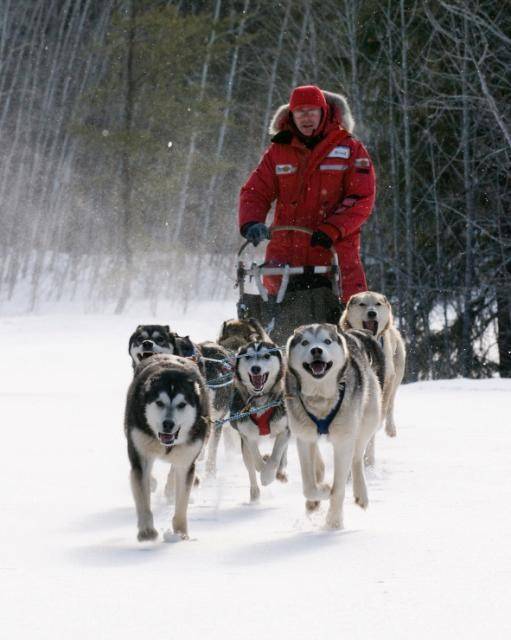 Brad is the first to admit that a person can only look so far ahead before everything changes and a new situation is at hand. “Here’s you, here’s the dog, and then there’s a universe of possibility for the next 10 seconds. What’s going to happen?” he says.
For sledding enthusiasts, like others, climate change has meant adaptation. Sled courses are adjusted and race dates shifted. The Iditarod—perhaps the most famous sled race, covering more than 1,600 km (1,000 miles) in sometimes under nine days—is routinely rerouted to take advantage of snow conditions. Snow has even been imported to the streets of downtown Anchorage, Alaska, where the race usually begins. Competitors remain undaunted; 72 dog teams competed there in 2017.
Elsewhere, they have not been so lucky. The annual Canadian Challenge, from Prince Albert to La Ronge, was canceled two years ago because of a lack of snow. The two-day Torch River Run at Christopher Lake starts and stays primarily in the forest and is less susceptible to “brownouts” than races starting on the edge of prairie and aspen parkland, Brad explains.
A shortened sledding season, Brad acknowledges, isn’t the most critical issue: “In 1996, when I worked for one of the parks, my supervisor had me do a video on climate change. I just pulled the old tape out and listened to it. It’s come true—changing ecosystems, warmer climates, drier climates, even the possibility of more severe events. It’s not speculation anymore.”
In spite of the uncertainty ahead, Brad continues to be hopeful about the weather and local ecotourism. There’s no more exhilarating way to see the North, he promises. In part, responding to this challenge has meant being innovative. Brad has added more sunset runs in March, when the temperatures cool, and recently added Puppy Camps to his winter program, for young children and their families to get to know the dogs up close and personal. These are especially popular around the holidays, when people get together, and help to make up for lost bookings when the weather doesn’t cooperate.
With dogs, Brad points out, every day of the season brings something new and interesting. “It is kind of thrilling to be alert enough, aware of everything at once, to manage everything,” he says, grinning. “After all these years, I don’t think I’d still be doing this if there weren’t variety.” 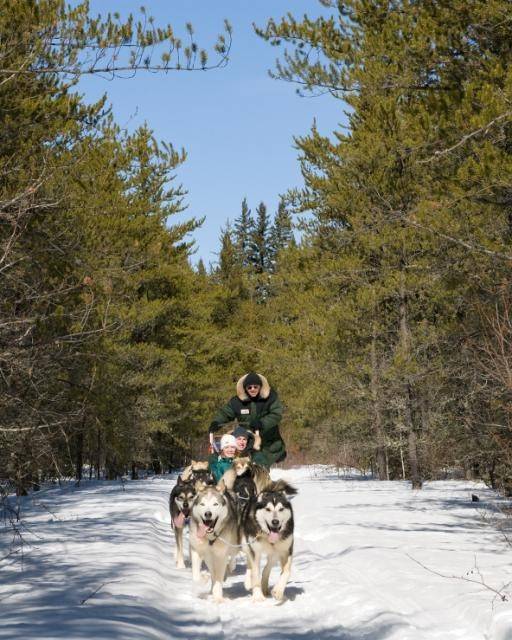 Brad checks the tow line one more time while I stand on the foot brake behind the sled. Once the snow hook is removed, the snub rope is all that keeps us from taking off. “A dog team is not like a snowmobile,” Brad says, calmly. “You can’t just shut it off.”
Brad moves swiftly to the back of the sled, and I hop in up front. Now I can feel the whole sled strain forward. He yells above the howling. “Just one thing to remember, no matter what: Hang on.”
Brad yanks the snub line free, and six dogs buck forward. We’re off!