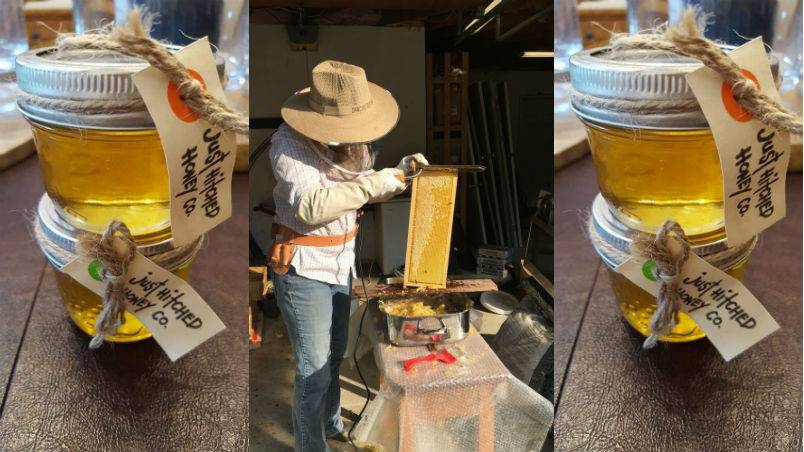 Bees, bees, bees. After many years, here at Caberneigh Farm in Uxbridge, Ontario, we decided it was time for bees. I mean, we have horses, dogs, cats, laying chickens and a pet pig, so the addition seemed obvious. When your gateway animals are horses, well, everything after that seems much easier. And that is important […]
By Nicole Robertson

Bees, bees, bees. After many years, here at Caberneigh Farm in Uxbridge, Ontario, we decided it was time for bees. I mean, we have horses, dogs, cats, laying chickens and a pet pig, so the addition seemed obvious. When your gateway animals are horses, well, everything after that seems much easier. And that is important because the first thing all your friends say is “Bees! Aren’t they so much work?” Oh, wait, that’s wrong. The first thing they say is “Aren’t you worried you’ll get stung?” So, let’s clear that up right away. Yes, Virginia, you will get stung, likely more than once. But compared with wasp and hornet stings, a bee sting is (short of anaphylactic shock, of course) pretty mild and comes with a sweet payoff.

So what makes someone decide to get bees? Well, the motivations are many, as I found out from my first bee class. And that is the start of my adventure, because, yes, there are bee classes. Bee classes, bee meetings, bee groups, bee blogs, bee webs, bee socials, bee co-ops, bee defenders and bee dances—you name it and there is likely a bee version of it.

But back to the why. Well, we wanted to help pollinators and do our part for bee survival, make honey for home and friends and, of course, model that flattering white suit and veil. Others want to start bee businesses; get wax for candles, honey for soap, and royal jelly and propolis for health; strike fear in the hearts of their neighbours; and amp up their cool factor.

The how has as many roads as the way to Rome, but for us, it began with the purchase of hives, frames (nucs), those stylish white suits and the pith helmets with veils. Then, after getting officially kitted out, it was time for the intro-to-beekeeping class. That was an eight-hour session, put on by our provincial beekeeping outreach, with about 25 other attendees on a very hot, sticky day. Alternating between lectures and suit modelling and hands-on sessions in the bee yard, there was an impromptu mad dash as a newbie ran, flapping and swearing, across the yard (a big no-no). 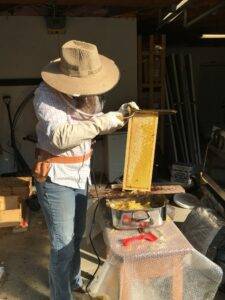 Photo of Nicole Robertson, kitted out in bee gear

Now, let it be said (no pun intended) that there is no end to what you can learn about bees. These are some seriously interesting creatures. The good thing is that you only need the very basics to get started.

The next step for us was getting the bees home. We started with the nucs, “mini-hives” that look like a size 27 Shaquille O’Neal shoe box. Yep, a giant shoe box with four frames and thousands of bees and their queen. We were expected to transport that home, in the car, for an hour and a half with what sounded like the soundtrack to a horror film in the back seat.

Of course, you are not obliged to bring them home in the back seat of your car, but I wanted to get off on the right foot and thought the bees might feel slighted by a trip home in the trunk. Ponder, for a moment, those two giant shoe boxes filled with angry bees who were not impressed with all the vibrations or my musical choices (Disturbed’s “The Sound of Silence” cover). It was one for the books, that trip. Fortunately, no police decided to interfere during our trip home, although boxes of bees in the back seat would be a valid excuse for erratic driving that might actually be accepted.

But just because we arrived home relatively unscathed does not mean we were done. That said, a serious glass (translation: vat) of wine was in order before the big move into the prepared hives. I must confess that I left the bees in their shoe boxes until the next day, as they still seemed seriously unhappy with my chauffeuring skills. So early the next morning, out I went to make the move. Fortunately, my mom decided to record this for posterity (or as evidence), so there is an incriminating record of the move.

With the hive boxes in place and the shoe boxes in place, all I had to do was open the box! Yes, that’s right: open the box. Uh-huh, yep, no problem. And here is the kicker: it really was no problem. Open the box, move each of the four frames into the new hive box, add the extra empty frames on either side, check each shoe box for housebound laggards, and there you have it! Bees in hives. I admit, as I noticed when watching the video later on, that I did resemble nothing so much as a veiled sloth doing an interpretive dance, but they were in their hives!

It’s recommended that you don’t disturb the hives for the first week, so the bees get used to their new digs. But after that time frame, experts suggest opening the hives and checking for activity and feeding the bees sugar water as a backup food source.

Yep, there it is again: open the hive. So back into sloth mode I went. As the cover came off, dozens of curious or angry—it’s hard to tell which—bees immediately started buzzing around me. Presumably, they were checking me out as friend or foe. But after their initial surveillance, they seemed happy to leave me alone, and then I was left to experience the remarkable sound of thousands of bees working together in their hive (not the “Sound of Silence”). It was less like a horror movie and more like an oddly tranquil, gentle hum.

For the rest of the summer, little time investment will be required, other than placing a “honey super” on top of the hive. Every few weeks, it’s advised that you examine the hives to ensure that your bees are producing eggs (brood) and honey. Also, note that visitors seem to like nothing better than donning the white suit and hat and going to visit the hives, usually from a significant distance. I like to go and watch them fly in and out, doing their bee things.

So for any of you thinking about making the leap, I say go for it. Bees are not big work, but they are a big reward. Certainly, fall and winter bring some additional chores but, hey, that’s when you get the honey treats as well. But that is a story for another day. 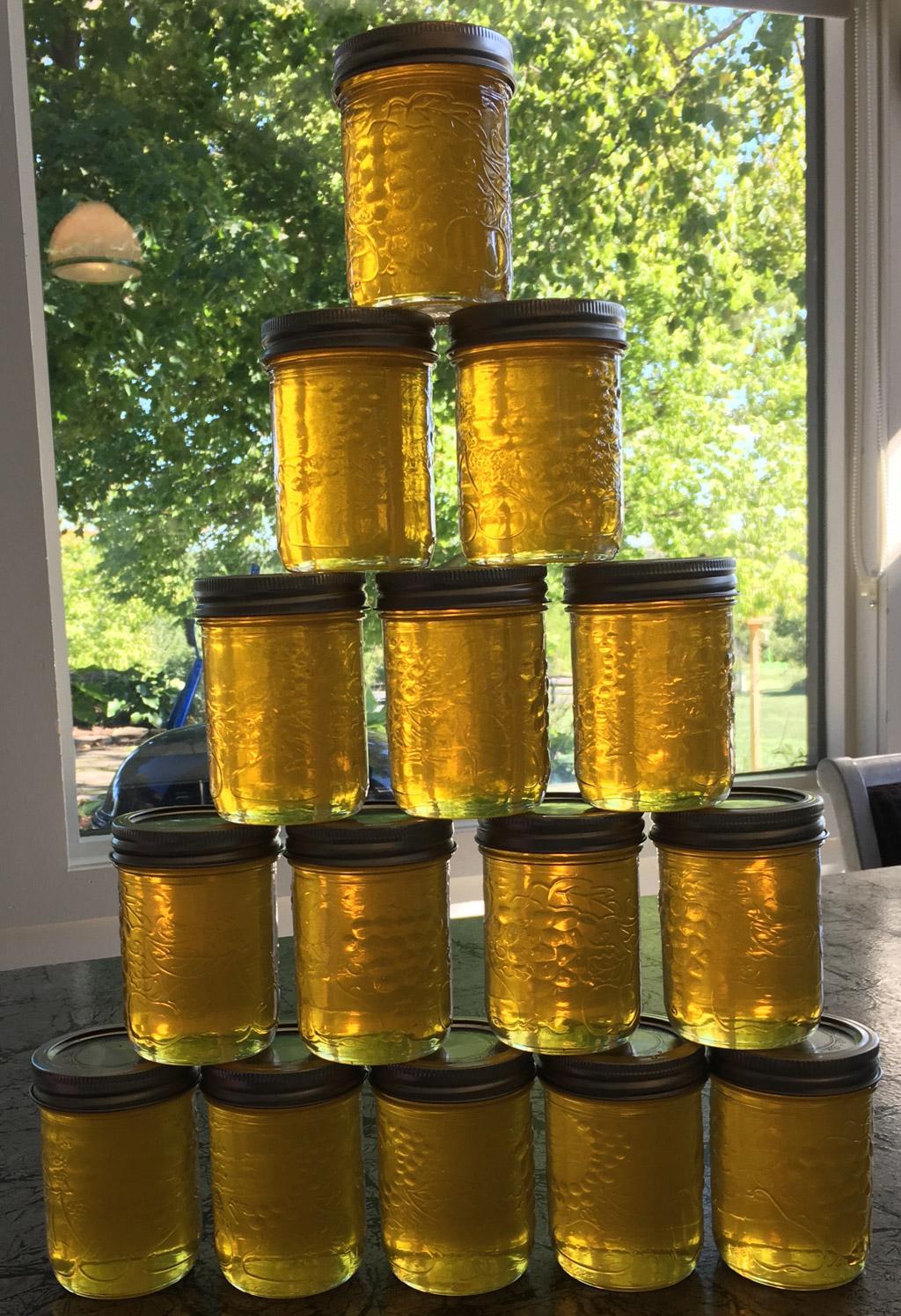 Nicole is one of the caretakers of Caberneigh Farm. The farm is a 50 acre hobby farm between Uxbridge and Port Perry. We have many animals- Horses, dogs, cats and recently Olive the Pig. We feel lucky to occupy this space and we invite family and friends to enjoy often. cheers!