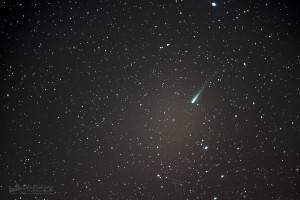 We asked Robert Dick, our Astronomy Editor, for his take on Comet ISON, the bright light in the sky which seems to be exasperating night-sky watchers and failing to become “The Christmas Comet” / “Comet of the Century” that it was supposed to be.
By The Harrowsmith Team

ISON is “behaving” like a normal comet, and yes it is exasperating to try predicting how bright it will appear as it passes by our planet.  But we can be assured that many amateur astronomers are following the comet and posting their observations and images on the Internet, so we can all partake in this little adventure.

Astronomers have studied comets for millennia, but each comet is different. Like people, they vary in size and temperament. They are very far away for most of the time we have to study them, so without understanding their “personalities,” it’s very hard to predict how bright they will get.

To get ‘bright,’ a comet has to come close to the Sun, pass near our Earth, and have large reflective tails of gas and dust. Comet ISON has not come through the inner part of our solar system very often, so in theory, it should have lots of gas and dust for a nice tail.

But there is more to it than that, and this is why Comet ISON may, or may not, put on a great show for the public.

Comet ISON will get so close to the Sun that the comet will feel tides, similar to, but much stronger than those we see affecting the water on our ocean shorelines. How strong is the structure of this comet? The tides raised by the Sun’s gravity may crack it open, exposing lots of fresh ice and dust that may vaporize off the surface and form large bright tails for us to observe, or it may pull the comet apart. After rounding the Sun there may be little left of the comet, so we may see nothing at all.

This makes prediction very difficult. But we can also see this as an opportunity to learn more about Comet ISON, and about comets in general.

And what is more important, the public will see what happens at the same time as the astronomers. We will all experience the events together. In some respects, astronomy is one of the most “democratic” of all the sciences. The public can explore and experience the universe alongside the astronomers. The Internet is one way to tap into the observations of tens of thousands of amateur astronomers with large telescopes and sensitive cameras. Search the Internet for Comet ISON posts, and you will see it all unfold.

One of the “amateur astronomers who are following the comet and posting their observations and images on the Internet,” Liikane posted this image on social media in October, 2013.

“This morning I captured my first comet, C2012 s1 ISON, with a tracker in the Torrance Barrens, Ontario, Canada,” he wrote. “This comet is supposed to be the comet of the century and visible to the naked eye hopefully later this year. I plan on capturing more of comet ISON as it gets closer and more visible.”