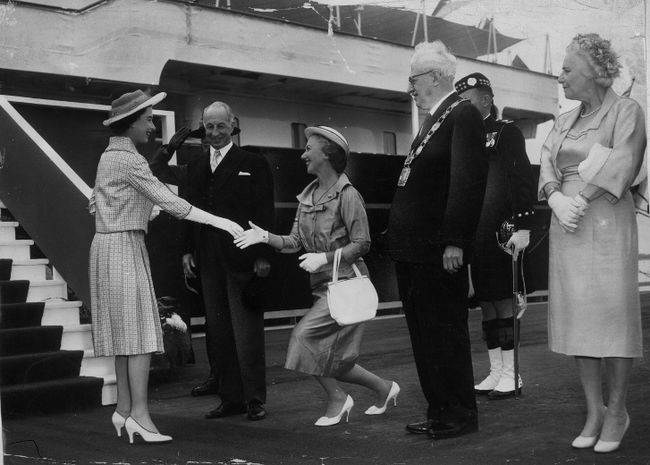 It was a visit Canadian small towns aren’t going to forget any time soon.  In 1959—more than 50 years ago—Queen Elizabeth and Prince Philip came to Canada for a 45-day, cross-country journey.

Starting in Torbay, Newfoundland, the Royal couple saw Canada like no other monarchs before them. They travelled by water through the islands of Ontario’s Georgian Bay and on Lake Huron. They took in the Rockies by Royal train and braved a narrow passage from Whitehorse to McCrea in a train built 70 years earlier to transport gold prospectors to the area.

“They toured iron works in Labrador, nickel mines near Sudbury, the gold rush area of the Klondike and the Northwest Territories towns of Yellowknife and Uranium City.”

All the while, statesmen took a back seat to the rough-and-tumble folks of Canada’s backwoods. The royals met bona fide coureurs-de-bois, fishermen and lumberjacks as they made their way across our landscape. They toured iron works in Labrador, nickel mines near Sudbury, the gold rush area of the Klondike and the Northwest Territories towns of Yellowknife and Uranium City. And they were invited into the homes of “ordinary people” in Schefferville, Quebec, and in Tuxford, Saskatchewan.

The highlight of the 1959 royal visit—and the catalyst for the entire trip—came on June 26, when Queen Elizabeth joined U.S. President Dwight Eisenhower in formally opening the St. Lawrence Seaway. After addressing the crowd at St. Lambert, Quebec, they boarded the Royal Yacht Britannia, which then entered the lift locks, and officially opened the seaway for business.

Seventy-six-year-old Bill Collard of Napanee, Ontario, was a young man at the time, but he remembers the feeling of excitement like it was yesterday. “I also remember hushed voices contemplating the reasons for the Queen’s illness during parts of her journey,” he says. “Of course, we found out after she returned home that she was pregnant with their third child, Prince Andrew.”