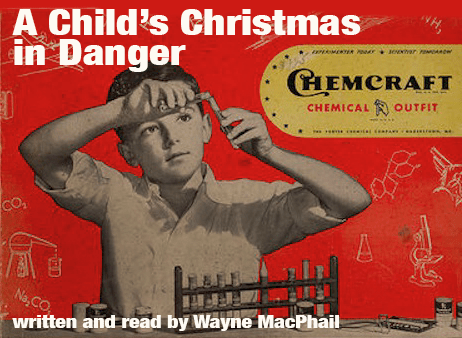 A Child’s Christmas in Danger

I remember surviving it all...
By Wayne MacPhail

with a salute to Dylan Thomas

One Christmas was so much like the other when I was a boy in Dartmouth, Nova Scotia that I can’t remember if I got six hazardous chemistry sets from three aunts when I was twelve or three dangerous rifles from twelve uncles when I was six. Each holiday season, now long past, rolls into one lab-coat-white ball of mayhem and bodily harm and stops at the edge of Halifax Harbour, forever frozen, in my memory. I plunge in my hands and out comes a Johnny Seven machine gun, with a rocket launcher and a detachable pistol.

I pleaded with my parents for that Johnny Seven week after week as winter rolled towards us across the Atlantic. It was, like so many toys, games and gifts of my youth, a minefield of minor injuries. We were not so coddled, not so protected then and so the gifts were — magnificent.

The Johnny Seven’s handgun had white plastic bullets you could swallow as easily as multivitamins. It’s clown-nose-red rocket could be, when the Johnny Seven broke, stuffed with toilet paper, taped to the end of an arrow and fired at your brother’s head. Yes, we had bows and arrows back then, ones with metal practice tips and wooden shafts. My brother and I would fire the arrows straight up and dare each other to stand still beneath them. What could have gone wrong? If we were in the mood to play cowboys instead we had, because we asked for them for our stockings, rolls of red and black caps filled with real gunpowder. You could, of course, fire them one at a time in real-looking metal pistols. Or, better still, take an entire roll of 100 little packets of the explosive powder, set it on the ground and smash it with a rock. The explosion echoed like a cannon blast all around the navy apartments near our house.

And, of course, inspired by the caps, I made my own gunpowder with the help of the chemistry sets I asked for each year at Christmas. They were grand sets back then, full of poisons and toxins, plastic-eating acids and skin peeling alkalies. I often got more than one set and, since different manufacturers didn’t compare notes, the elemental havoc was magnified by the combinations that ensued. Sulphur, charcoal and potassium nitrate, I learned long ago, make gunpowder. Charcoal was easy. Sulphur and potassium nitrate, thanks to generous aunts: check.

There were Christmas train sets too, back then. Solid electric engines that ran on electrified metal tracks. These were trainsets without circuit breakers and with large, hot transformers packed into black Bakelite boxes that smelt of ozone and electrocution.You could place a nail on the tracks like a helpless damsel and watch an exultation of sparks, until the transformer burned out, acrid smoke rising like the steam from a kettle.

And one Christmas, a hockey game. The Leafs vs. the Canadiens on a particle board ice surface rutted with pathways for the defensive men, goalies and wings. The metal players where sharp as knives and flew through the air like throwing stars or like the lawn darts we also played with before we learned they could kill.

There were metallic tinsel to swallow, sleds with sharp steel runners, hard plastic clackers to pinch fingers, 101electric circuit projects to shock pets. There was gluten and dairy and white, refined sugar. There were unaccompanied walks to school after the tree was gone and Christmaswas bundled away. I remember drifts above our heads, wool snow pants frozen plank-stiff and snow forts along the way as deep and deadly as coal mines. I remember school yard snowball fights that hurt, hands red and wet after recess and the rapturous skunking kids on the way home. And I remember surviving it all, one Christmas after the next. I remember late winter nights when I would press my ear to a cold pillow and a colder, cheap headphone to hear the tiny voices from a Christmas crystal radio kit I had built myself. I listened to the words whispering from that small world, I delighted at the language and music drifting in like drowsy snow and then I slept.