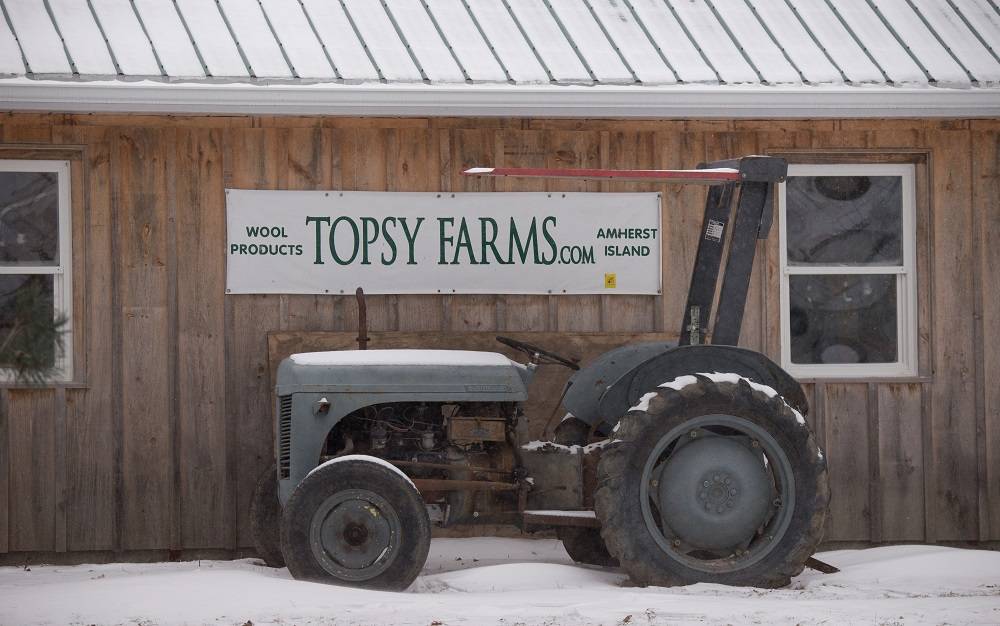 A story of shear luck.
By Phil Norton

When you pull into Topsy Farms, you notice an unusual Dr. Seuss-land A-frame barn with a tractor inside. Then, between two stone walls, you see four fuzzy faces peering out the gate—two Highland calves with bells around their necks, plus a dark-faced lamb and a white-faced lamb. Then, you meet Sally Bowen, wearing colourful woollen products from the farm, as she begins, without a formal greeting, introducing you to Cedar, Willow, Nellie and that white lamb, Brownie.

Sally explains that these lambs are two of last season’s 34 bottle-fed lambs, neglected by their mothers. It happens because they were either triplets to one ewe or abandoned due to some disability, “or they’re born into mud puddles and get hypothermic,” she says.

As for the unusual tractor barn, it was built like an “A” because they had some long planks after the original barn burned and they figured they’d put up a temporary structure, which became a 40-year solution. At first you may find this place a bit crazy, but as you get to know it you find out it’s also a bit magical and a lot compassionate.

Topsy Farms is in transition, downsizing from a traditional thousand-head sheep farm selling primarily meat, to a flock half that size, selling meat, woollen goods and experiential learning events for the public.

For instance, the “adopt a lamb” program allows families to pay to give special care to the abandoned lambs. Feeding them by hand with a milk bottle requires many extra hours; conventional farms don’t give that time, so those runts die. Here, the public is invited to cuddle them, booking half-hour periods just for their family to help nurture the weakest.

Topsy has a shop called The Wool Shed, with colourful displays of yarn and knitted mitts and hats, full sheep skins brushed super-soft, handmade socks, honey and framed pictures. Don’t miss the popular woollen blankets and a freezer full of chops and shanks and chunks of lamb for stew.

Sally’s husband, Ian Murray, and his daughter, Leah, stand at the store counter working with an iPad, the new way of tracking inventory and taking payment from customers. Leah recently joined the family trade and helped move the retail aspect online.

The 500-acre property with a maple woodlot and beach and pastures lies at the remote western tip of Amherst Island. Topsy Farms may be hard to get to out in Lake Ontario, but those hundreds of sheep draw hundreds of visitors across the ferry, which is how this family business intends to stay alive.

Amherst Island (population 450) seems a world apart from the busy city of Kingston (population 120,000), visible from the other end of the island. It’s an ancient, windswept land with unpaved roads, old barns and stone fences dating back to its Loyalist and Irish settlement of the 18th and 19th centuries. The island’s summer and autumn appeal now is for bicycle tourists, artists and birdwatchers.

Harrowsmith started north of here and popularized country living as an alternative to things faster and bigger and urban. It was around that same time that Topsy Farms was founded with the same philosophy, beginning as a hippie commune in 1971. Ian and other young people disenchanted with society and its capitalist bent, including some American draft dodgers and some city kids, found a safe haven on a remote island, living in harmony with the land.

Like Harrowsmith, these young people introduced new ideas to the community, which, Ian recalls, raised the eyebrows of the locals. Appropriately named, Topsy Farms and their side business, Turvy Construction, were doing everything upside down in the eyes of the old-timers who were constantly wondering what they were up to now.

Topsy used only organic methods at first, but added the non-organic grains, antibiotics and anti-parasite medicines for the best health of their animals. No growth hormones are fed to the flock. Compost and manure are used instead of chemical fertilizer, with no harmful agents or nitrogen to leach into the lake. They were the first to bring round hay bales and electric fencing to the island.

This end of the island is not a farmer’s dream. It’s truly a hardscrabble existence on 3- to 4-inches of topsoil. So growing crops for market was never an economically feasible option. Then Christopher Kennedy showed up from England. Cambridge educated, he wanted to be a shepherd. He stayed because the food was good, and he became a partner in the farm business.

“That’s how we ended up with sheep” says Jake, Sally and Ian’s son. He chuckles as he says he’s living the dream. Already before noon he’s played the role of vet, carpenter, mechanic, accountant and social media marketer for the family farm. Working 80 hours for minimum wage wasn’t really his dream when he got his political science degree, but in pursuing his original university dream he found that he wasn’t wired for life in the city. So when it came time for Jake to raise his first son in 2005, the decision was made to give him the country upbringing like he had on the farm.

His mother, Sally, is the face of welcome and compassion. She stands out by the dirt road to flag down visitors who might not know their way, greeting all with unpretentious enthusiasm, and chatting up the calves and sheep that wait for her affection. Sally shares the vision of transformation for the future. She posts furiously on Facebook, Instagram and their Shopify website, telling about upcoming events and stories of life on the island.

“With our lambing and shearing events, people are coming to the farm, some for the first time,” says Jake. “They see it in person and can touch and hold, and it’s not on TV. It’s especially good for people who are going through tough times. In a half-hour holding a lamb, a therapeutic exchange happens. The lamb needs love because it’s not being taken care of by its mother. We receive letters from visitors saying they are going through a divorce or illness, whatever, and holding the lamb made such a difference. Now, that’s a life I can hang my hat on.”

At the start of last year, they had to reduce their flock from 1,100 to 650 because Christopher, their full-time shepherd of 48 years, as well as two other partners, retired. That left the Murrays with the financial struggles of paying off three shareholders of the business. It meant making new deals with the bank and finding new ways of generating farming pay.

Family members and friends stepped up and became the new farm staff. Leah is the new farm manager. Topsy Farms’ close friend Will handles the machinery. Jake does marketing, event hosting and tends to the flock with Kyle, his younger brother. Kyle is now the farm’s head shepherd, with guard dogs as his full-time helpers, along with his friend Kayleigh, who, Sally says, “came to visit the lambs, then adopted a lamb, then adopted us.”

Topsy has often served as a place of refuge and healing. They have always generously given room and board to young people who need it. The working-family relationships have to be good because the entire home business is at stake. Jake says they have truly bet the farm.

“Yep, we’re a bit of an eclectic mix of skills, enthusiasms, crises and, somehow so far, all seem to pull together pretty well,” affirms Sally.

Ian comes from a lifelong farming background and doesn’t wear the worries on his face. He was born in Prince Edward Island, but his folks left there and came to Ontario for better education for the family. Ian is an engineer. He saw their farm on the outskirts of Toronto become Winston Churchill Boulevard, so he has adapted to change before. His laid-back manner stems from a lifetime of many challenges that have come and gone, and he faces this new era with a positive attitude.

“Our success going forward is to continue what we’re already doing in a more purposeful way,” says Jake. “We can’t just raise sheep; we can’t just sell wool. New Zealand can put a lamb in Costco and charge less than what it costs us to raise one. That’s partly because they have no winter and no predators. Advanced medicines exist there that we just can’t access. They’re not subject to the same expensive regulations and constraints.”

They will host events like the sheep shearing and lambing, as well as workshops on grafting trees, foraging for wild edibles, and finding fossils and fungi. Dry Stone Canada holds an annual festival—a weekend building walls without mortar—which Topsy Farms hosted in fall 2018. It brought hundreds of people to the farm. They got media attention and made lifelong friends. And sales at The Wool Shed went crazy.

This family is tied to the past and tied to the land and is eager to share it with those who seek such connections.