The Hunt is On!

In 1912 the eccentric (and fictional) Canadian inventor, Thaddeus Barnes set out on a unique journey across Canada. His mission? To hide six copper cylinders containing pieces of a brass key. The fully assembled key would unlock Barnes’ safe, a safe full of his greatest secrets and his staggering fortune. Barnes’ greatest invention, the electron […]
By The Harrowsmith Team

In 1912 the eccentric (and fictional) Canadian inventor, Thaddeus Barnes set out on a unique journey across Canada.

His mission? To hide six copper cylinders containing pieces of a brass key. The fully assembled key would unlock Barnes’ safe, a safe full of his greatest secrets and his staggering fortune. Barnes’ greatest invention, the electron compressor, was sought after by a dark cabal within the Canadian government and by a European mercenary cell keen on sparking WWI. 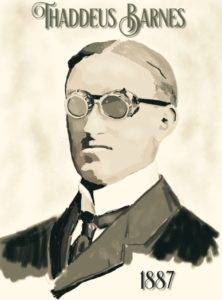 The only clues Barnes left behind about the cylinders’ whereabouts were contained in a cryptic notebook recently discovered in the Canadian Archives. That notebook was meant for his three children, as a test of their worthiness to become a Barnes heir. All three children travelled from England to Canada on the Titanic to view the notebook. Like so many others, they perished on the voyage.

Now, to celebrate the 40th anniversary of Harrowsmith’s publication, Canadians can tackle the the mystery of The Strange Copper Cylinders of Thaddeus Barnes and attempt to discover the location of his hidden safe of secrets.

The Strange Copper Cylinders of Thaddeus Barnes is a steampunk style treasure hunt that will unfold over twelve weeks starting on August 22. Each week a page of Barnes’ notebook will be revealed. It will contain thorny clues about the safe’s location somewhere in Canada. The pages will be released on the harrowsmithnow.com website and on Facebook.

A vibrant community has already blossomed on Facebook in anticipation of the contest. You can find it here:

A draw will be made from correct entries for the grand prize. And, each week we’ll be releasing a new episode of The Strange Waxed Cylinders of Thaddeus Barnes, a companion podcast about the adventures of the bold inventor in a young Canada along with his brilliant daughter Phillipa and his friend and rival Nikola Tesla. It will be featured on the rabble podcast network, thanks to our media sponsor, rabble.ca. The contest is our way of introducing the Harrowsmith Now brand and site (harrowsmithnow.com).

“With Harrowmsmith Now we’re bringing the values that have fuelled Harrowsmith for 40 years to a new generation who share a love of sustainable living, local food, a love of the country and a passion for the handcrafted and carefully made.” said Yolanda Thornton, Harrowsmith’s publisher. “We think our new Millennial is going to love Harrowsmith Now and Thaddeus Barnes, who’s helping us celebrate our 40th anniversary.”