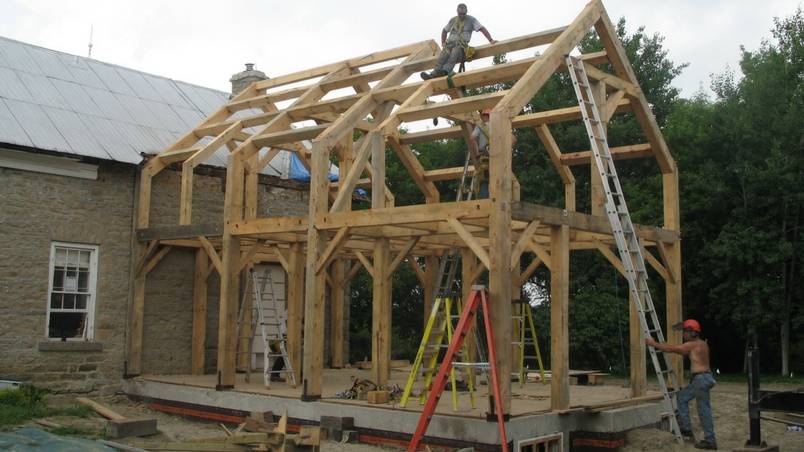 Every so often I discover someone whose passion for craftsmanship is strong enough to endure a lifetime spent doing something else. That’s why Ottawa timber framer Ray Gibbs is worth meeting. He spent a 34-year career working as a lineman for Ontario Hydro, but he never forgot the sense of awe he felt looking at […]
By Steve Maxwell

Every so often I discover someone whose passion for craftsmanship is strong enough to endure a lifetime spent doing something else. That’s why Ottawa timber framer Ray Gibbs is worth meeting. He spent a 34-year career working as a lineman for Ontario Hydro, but he never forgot the sense of awe he felt looking at barn beams while growing up on an eastern Ontario farm. Now retired from Hydro, Ray is an active commercial timber framer, creating the kind of beauty he was obviously born to build. 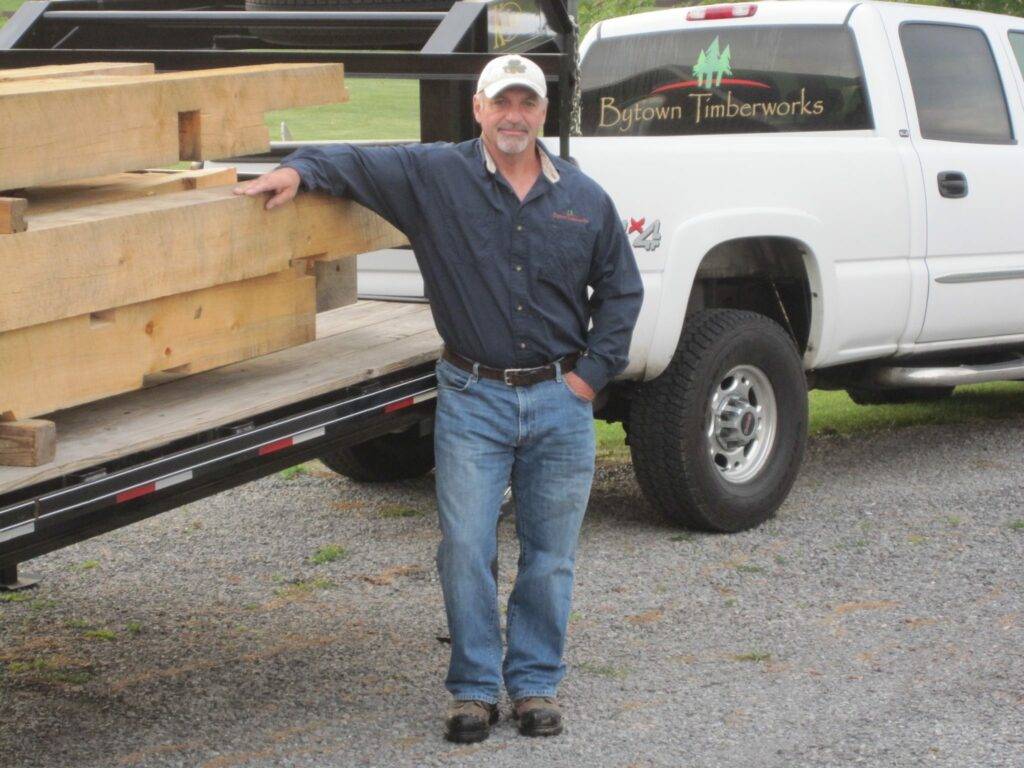 Timber framing is an age-old method of construction that uses large wooden posts and beams cut and joined to make a structure. These days you’re more likely to find new timber frames as part of homes, workshops and commercial buildings rather than barns, but the old beauty is still there, at least as amazing as always.

These days Ray cuts and assembles timber frames by himself, and he began in his spare time while still employed as a lineman. “It wasn’t until the 80’s that I learned there were people out there actually building new timber frames”, recalls Ray. “So I started reading everything I could about the craft. Soon after that a buddy and I built his house, armed with a book as our only source of guidance.” 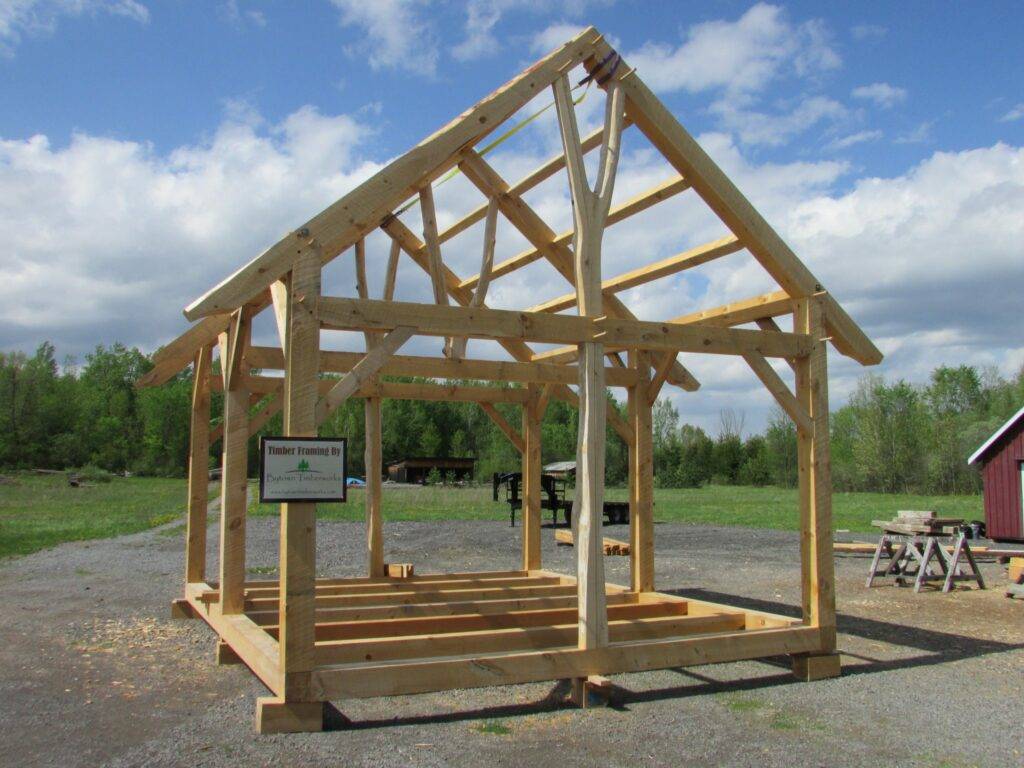 A 16 x 20-foot timber frame built by Ray Gibbs as a space for working with bee hives and extracting honey.

Since that start in the work 30+ years ago, Ray has taken courses and workshops in the Massachusetts area – the region where the revival of old-time timber framing began in North America in the 1970s. Ray is also a member of the Timber Framers Guild. You’ll find his frames within 2 or 3 hours of Ottawa, one frame in Canada’s famed Muskoka cottage country, a few in Quebec and others within 5 to 15 minutes of his shop. You can learn more about his work online at bytowntimberworks.com

The thing that impresses me most about Ray is his commitment to quality and his passion for authenticity. This is something that took him to Europe on what had to be the most impressive example of timber framing adventure you can think of.

“In 2008 I was the only Canadian on a 10-person crew of carpenters from Europe and the US, tasked with the job of building a small timber structure using only the tools and methods of medieval England. In the 1200’s the Templar Knights built two large tithe barns near what is now called Cressing Temple. These barns still stand proudly today. Our job was to raise a complementary structure using only what the Templar Knights would have used. Every timber was hewn square by hand, with chisels, saws, spoon augers, plumb bobs, walnut ink snap lines and story poles for the joinery. We also hand-split oak shakes for the roof, fastened with hand forged nails.”

Although Ray’s work back here in Canada uses somewhat more modern tools, the process still comes down to a lot of careful hand work. “I still get excited when a joint fits together with no gaps”, explains Ray. “Watching a draw-bored mortise and tenon come together with each mallet strike is one of life’s little joys. Scarf joints are particularly satisfying because they take so long to cut but look so nice when assembled.” 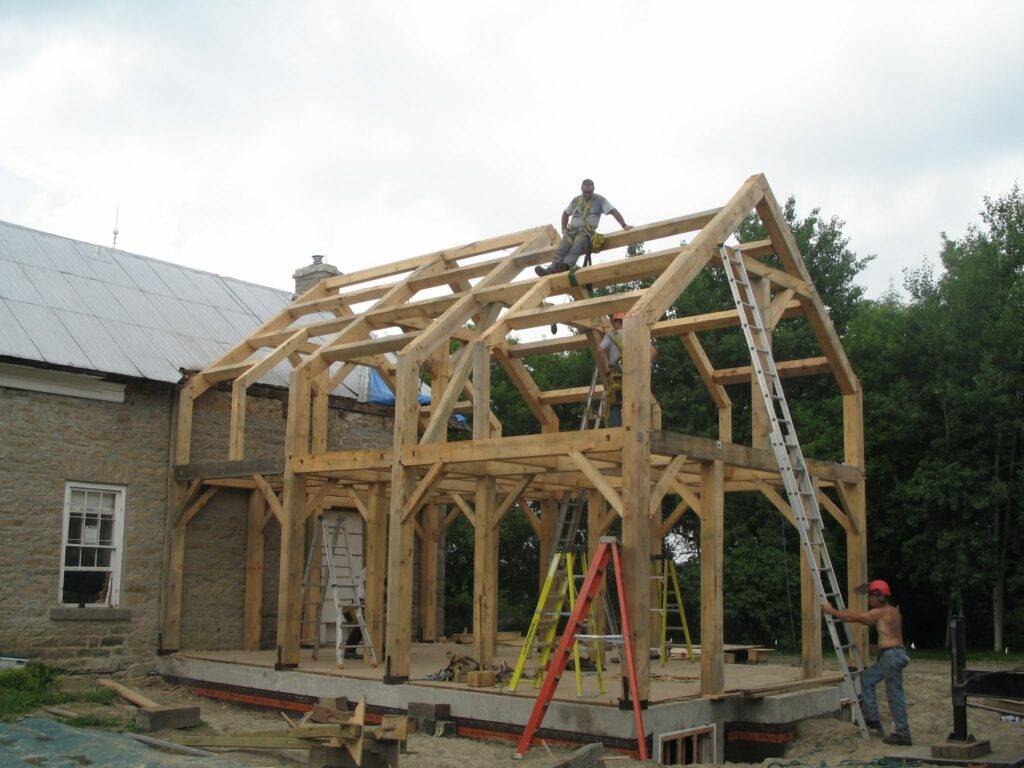 One of the many timber frames Ray Gibbs has built. Though he works alone in his shop, he has a crew to help raise the frames.

There are two reasons I find people like Ray worth knowing about. First is strength of passion. Not even a demanding, full-time career kept him from developing the kind of skill you hardly see any more. Ray obviously makes good use of his time. And second, in a world where craftsmanship is in steady decline everywhere, isn’t it especially precious to see what old-time values, care and workmanship looks like?