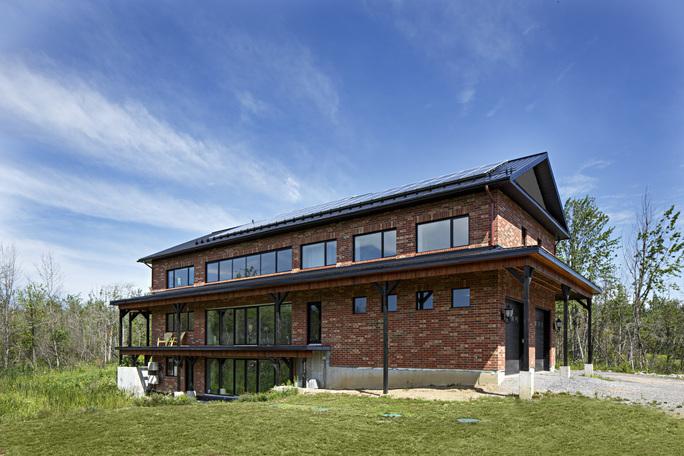 For Casey Grey, founder and CEO of The Conscious Builder Inc., building his eco-friendly house was about more than building his dream home: it was also about showing others what can be done. “We knew we wanted to build something we felt good about and that aligned with our values,” says Grey of his Passive […]
By Catalina Margulis

For Casey Grey, founder and CEO of The Conscious Builder Inc., building his eco-friendly house was about more than building his dream home: it was also about showing others what can be done.

“We knew we wanted to build something we felt good about and that aligned with our values,” says Grey of his Passive House design home. “We wanted to build something that could educate other people and show them what was possible. A lot of houses that aren’t built well—builders say people don’t ask for it. We say they don’t know. If we start educating people, they can start asking for things.”

Following the principles of Passive House design, a standard for energy efficiency in a building that reduces its ecological footprint, Grey’s home includes such environmentally friendly initiatives as solar panels on the roof, air-source heat pumps for heating and cooling, and the use of reclaimed materials to furnish the interior.

According to Grey, Passive House is the only performance-based standard in the world. “A Passive House is going to use 80 to 90 percent less energy than the current building code,” he says. “That’s achieved with super-insulated walls and high-performing windows—an airtight home. You don’t need south-facing windows, but if you have them, you can use that heat to help heat your home in winter, so proper orientation is very important. And because the home is so airtight, we use fresh-air systems, such as an HRV (heat-recovery ventilation) system, which will run 24/7 and bring in fresh air, which is filtered, so you’re not breathing all the chemicals that come through your walls. It’s not only more comfortable, but it’s also healthier.”

With a design in mind, Grey and wife Natasha searched for the perfect property to suit the type of house they wanted to build for their family, which includes son Sullivan, age three. What they found was an empty two-acre lot in the centre of Manotick’s Rideau Forest in Ottawa. “The location worked out for us, being out of the city and [close to] family in Ottawa,” says Grey. “We wanted a treed lot, so we’re pretty limited to what we have in the Ottawa area.”

As part of the energy-efficient design, Grey also considered the orientation of the home. “We wanted a lot that could have a lot of south-facing windows, and we didn’t want them looking at neighbours’ houses or the street,” he says. “This lot looks onto 42 acres of protected land, and you can’t really see my neighbour.”

Grey worked with Vert Design on the design, with owner Chris Straka. He also collaborated with an energy advisor, Homesol. Both companies focus on eco-friendly design. “Chris built the first residential Passive Home in Canada, here in Ottawa, in 2008. And Homesol deals with energy consulting, going into homes and modelling them for performance,” says Grey. “All the renovations we do, we’ll send Homesol in to find out how the home is performing before, and then again later, to show how it’s doing after.”

Construction on the Grey home started in November 2013. The family moved in June 2014.

As with other eco-friendly homes, initiatives go beyond energy efficiency: sustainability and off-gassing were also taken into consideration.

“All the pine floors are reclaimed pine from the Ottawa River—from a company here, Logs End, that has a licence to pull out logs,” says Grey. The floors in the walkout basement are cork. 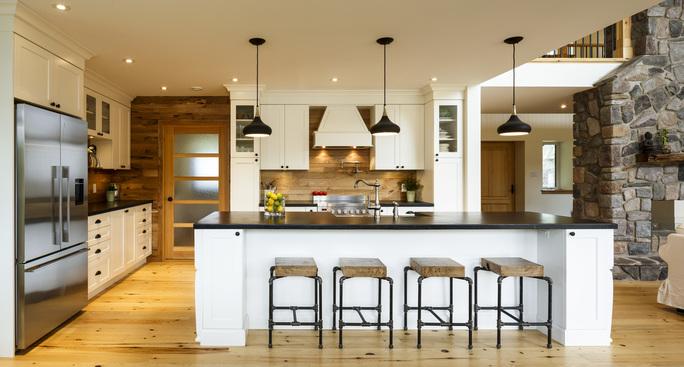 “The trim, baseboards, window sills, bar stools, mantle and kitchen backsplash are butternut, from my mom’s property in Vermont. They had to take trees down, so we bought them,” says Grey. “The built-in shelves, the sliding barn door in the master room and the dining room table were all built out of reclaimed wood from another project we were doing. We had to rebuild the front porch of a hundred-year-old home, so we saved the joists and turned them into furniture.”

Conscious as they were with the build, Grey and his team didn’t hold back on his dream home. The two-storey, four-bedroom house, which is over 2,800 square feet—4,000 square feet with the basement—has two and a half bathrooms, a gym, an office that can be turned into an in-law suite, and a nanny suite.

“If you feel you have to sacrifice something, that’s not true sustainability,” he says. “[It’s about] how we can get the things we want in life without sacrificing our lifestyle. How can we build a nice home that’s also environmentally friendly and use it with less energy?”

To that end, the home has a 10-kilowatt solar system on the roof, which is steel. For heating and cooling, the home uses air-source heat pumps. “They’re basically air conditioners that work in reverse as well,” says Grey. “We heat the water the same way.”

Even the double-sided fireplace is bioethanol. “The home is fossil fuel free,” he says. While the whole house is electric and the family uses more electricity than the average home, their hydro bill is low by comparison. “And because we’re part of the microFIT program, not only do our utilities cost less than most houses, but we also make money [from the solar panels],” says Grey. (Ontario’s microFIT program provides homeowners with the opportunity to develop a small or “micro” renewable-electricity generation project on their property and be paid for the electricity they produce, which is delivered to the province’s electricity grid.)

Despite his background and experience, Grey still learned a lesson or two making his Passive House. “One lesson we learned was that all the south-facing windows make it difficult to regulate temperature, especially when the sun is out and the sun is low, and it can get too hot. In the summer it’s great, though, because the overhangs block the sun,” Grey says.

Clean air to breathe is a welcome bonus of the eco-friendly initiatives of the home. “We were in Florida for the winter, and we appreciate the house so much more,” explains Grey. “The homes in Florida—they’re not built very well, and there’s a lot of humidity and all sorts of mould and mildew issues. They just smelled musty. We didn’t realize how fresh the air in our home was until we experienced that.”

For Grey, Passive House design is about the future. “It really hit me when Natasha and I had Sullivan,” he says. “I started thinking about the consequences of what’s going to happen in the future, and health and indoor air quality and materials. In our society, we wait until it’s too late: we don’t go to the doctor until there’s something wrong with us. We don’t build quality, efficient homes until the building code tells us we have to do it, or we can’t afford the energy bill anymore. I know it’s not affordable for everybody, but if people can take baby steps, that’s going to make a huge difference.”