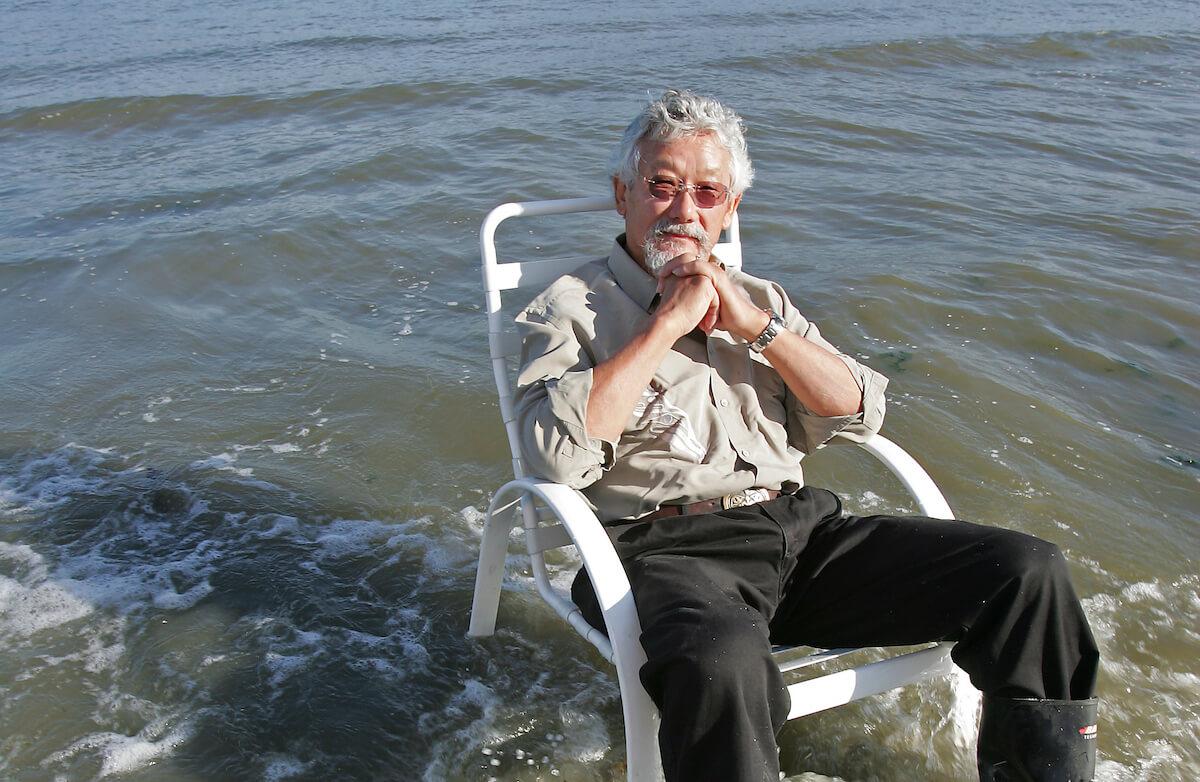 A conversation with David Suzuki

There’s no competing with David Suzuki’s resumé. The accolades, degrees (a PhD in zoology and a BA in biology), honorary degrees (25), awards (four Geminis) and list of publications are enough to make all of us feel a little lazy. He’s been adopted by several First Nations chiefs who have given him names like Nan Wa Kawi (“Man Who Knows Much”) and Gootm Lugu Waalksik (“Heart of a Prince”). 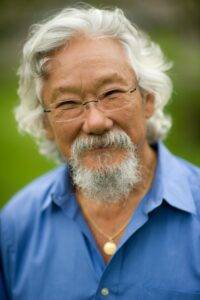 Environmental troubadour, geneticist and broadcaster, Suzuki has also authored a staggering 52 books. Move over, Margaret Atwood! His text book, Introduction to Genetic Analysis (published in 1976 with A.J.F. Griffiths), has been translated into Italian, Spanish, Greek, French, German, Indonesian and Arabic.

His landmark television series, The Nature of Things, is in its 55th season. I remember recording programs in the early ’80s (pre-VCR) on my cassette recorder (quickly rewinding tapes with the end of a pencil if they had spooled out) between commercials.

Many of you were probably first introduced to Suzuki’s curious mind and insights on the CBC radio program Quirks & Quarks, which he hosted from 1975 to 1979. He also wrote and hosted Suzuki on Science, a weekly CBC TV show for children, from 1971 to 1972.

His book Tree: A Life Story (Suzuki and Wayne Grady, 2004) followed the life of a Douglas fir from seed to maturity to death. Illustrated by Robert Bateman, it’s just one of a shelf of books that explore humanity, elder wisdom and the global eco-crisis.

In 1990, Suzuki co-founded the David Suzuki Foundation (DSF) with wife Tara Cullis, a former Harvard University faculty member, an award-winning writer and his pillar. “Solutions are in our nature” is the foundation’s mandate. Focusing on creating livable communities, the foundation assists urban centres in “protecting green and blue spaces” with cycle-friendly and transit-oriented development. There’s a push for food security and a mindfulness of products—the food and water we use. Naturally, the focus is on Canada, climate change, restoring salmon streams in Vancouver (Musqueam Watershed), and creating annual report cards of Canadian rainforests and the effects of clear cuts. The Pacific Salmon Forests Project has united central, northern coastal and Haida Gwaii communities in establishing guidelines for logging and the treatment of salmon streams.

Chefs have come on board with sustainable seafood support, and Olympians and NHL players have joined the DSF, advocating for carbon-neutral lifestyles. Of course, leading by example, Suzuki has stopped vacationing overseas in an attempt to reduce his carbon footprint. He counterbalances air travel with Gold Standard carbon offsets. The offsets are credits from projects such as wind farms that reduce carbon dioxide and greenhouse gases.

And then there’s the #gotmilkweed campaign. In its third year, over 10,000 packs of swamp, common and butterfly milkweed seeds were sold. The DSF has planted nearly 15,000. Seeds can be purchased or a “symbolic contribution” can be made (and seeds are planted for you).

The Suzuki Nature Challenge stemmed from numerous bewildered requests of how “we” could help the environment in our everyday lives. On the DSF site, You can find blog posts like “David Suzuki Digs My Garden,” as well as ideas from the Queen of Green on everything from green weddings to greener laundry soap.

Employees at DSF offices in Vancouver, Toronto, Montreal and Ottawa are privy to growing organic vegetables on the office patio gardens for use in their impromptu Soup and Salad Club. Some of the offices have living green walls, rainwater recovery, organic tea, Salt Spring Coffee, Ledalite (lights that auto-adjust according to the sky outside), recycled carpet tiles and geothermals. The DSF buys Green Electricity Certificates from Bullfrog Power (wind and hydro facilities and green natural gas from decaying organic matter in landfills).

Our Harrowsmith team had the opportunity to have a casual and illuminating chat with Suzuki when he was at his Toronto office, and we asked the questions that we’re sure you’re all wondering about.

Q: What book is on your bedside table right now?
A: Oh, there are lots. I have this fantasy of spending a summer at the cabin and reading all these must-read books that I’ve piled up. I’m reading The Hidden Life of Trees, which is one of our [David Suzuki Institute] publications. I’m reading The Gene by Siddhartha Mukherjee because of my interest in genetics. And Braiding Sweetgrass: Indigenous Wisdom, Scientific Knowledge and the Teachings of Plants. [Author] Robin Wall Kimmerer has a PhD in botany. It’s about the difference in the indigenous approach to plants versus the scientists’ [approach].

Q: What is the most important book you think every human has the responsibility to read? What should be part of our “human curriculum”?
A: Silent Spring by Rachel Carson, which was published in 1962. Small Is Beautiful: Economics As If People Mattered [by E.F. Schumacher]. The Hidden Life of Trees: What They Feel, How They Communicate—Discoveries from a Secret World [by Peter Wohlleben]. Braiding Sweetgrass. That’s a good start.

Q: Your 2015 book, Letters to My Grandchildren, led to me thinking about time capsules, as essentially that’s what letters are. What would you leave in a time capsule for your great-great grandchildren that would be indicative of you or this very time?
A: Audio tapes. It’s a Matter of Survival—the five-part radio series I did. The DVDs and films I’ve worked on, like A Planet for the Taking. Those are most important. The films are about all the issues [that were] so important in shaping how I looked at the world. And that led to the foundation, and the Suzuki Foundation is the legacy I’m most proud of. However, I worry that by that time, maybe they won’t have the means or the technology to see it.

Q: The year 2017 is the Year of Sustainable Tourism. Where do you think Canadians can travel to learn and be awed without guilt? I’ve read that you stopped travelling overseas and you buy carbon offsets to reduce your footprint. What’s your favourite place in Canada? Rural and urban?
A: I’m surprised by how little attention is placed on the place where we live. To our ancestors, their entire world was where they lived. They didn’t have to travel far. And this is the attitude that needs to change. There is so much here. I’ve lived in the same house for 40 years. Humans are social animals, and I love the city. I love Vancouver. My house… My mother’s and father’s ashes are there… My wife’s mother and father lived with us, though we didn’t think they’d live so long! They died in our house, surrounded by family. Vancouver isn’t real estate to me—this is my home.
And I love Haida Gwaii. I first began working with the indigenous and was heavily involved in the logging battles at the end of the ’70s in Haida Gwaii. I’ve been adopted by them. My daughter married a Haida. I have two Haida grandchildren—I have an in-law suite there!

Q: To borrow from hotshot New York chef and CNN Parts Unknown host Anthony Bourdain, tell us: What do you like to eat?
A: Fish. I’d be a vegetarian in a flash, but fish are such a great joy. We stopped eating beef a long time ago, but what did [environmental analyst] Lester Brown say? “Chickens are low-flying vegetables.” I couldn’t give up fish. My ideal setting is the early morning and emerging from a tent covered in dew. The grass is still covered in dew, and there’s a fire burning with a coffeepot on the grill. And there’s trout frying in butter. It’s so evocative. It’s the height of childhood memories with my father.

Q: To borrow Barbara Walters’ trademark question (which she first asked Katharine Hepburn in a 1981 interview): If you were a tree, what kind would you be? (Note: I was placing bets on a Douglas fir.)
A: I haven’t heard that one before. Well, I think I would be a Douglas fir. I wrote a book about a Douglas fir—it’s entire life [Tree: A Life Story]. And trees are unbelievable. They are a true wonder. A seed lands and it sprouts and it can’t move to better soil or a better water source. It will start growing on a rock. Trees live by eating carbon dioxides and absorbing sun and water. And still, they can generate these massive bodies and survive centuries. Now, that’s sustainable living. Trees created the atmosphere that we know. And, you know, being a tree hugger—it used to be such an epitaph. “Oh, that guy. He was a real tree hugger!” But you know what? I’m glad to be one now. 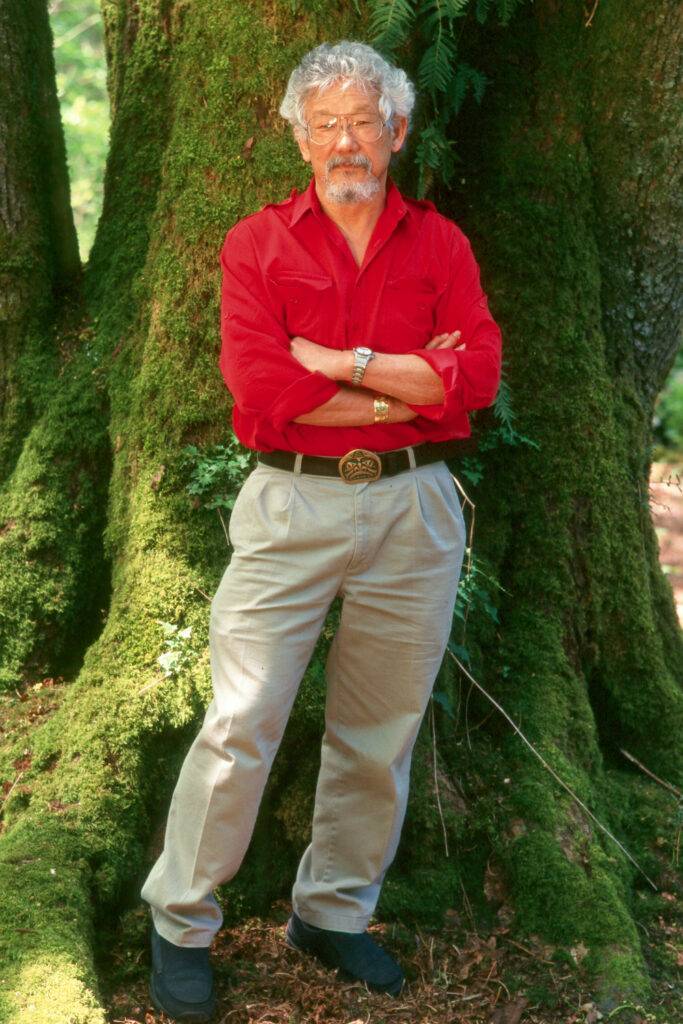