For the past 25 years, Tree Canada has been raising money and awareness of the importance of trees, not just for nature, but for the quality of human lives as well. “We are constantly trying to educate communities on the importance of urban forests,” says Richard Walker, Tree Canada’s Director of Communications and Program Development. […]
By Maurice Crossfield

For the past 25 years, Tree Canada has been raising money and awareness of the importance of trees, not just for nature, but for the quality of human lives as well.

“We are constantly trying to educate communities on the importance of urban forests,” says Richard Walker, Tree Canada’s Director of Communications and Program Development. “Our goal is to develop tools to assist every single community in Canada to help them understand their urban forests. Every city is different and every city’s needs are different.”

Tree Canada started out as a government agency in 1992, created as a part of then prime minister Brian Mulroney’s Green Plan. Initially, all funding came from the federal government, but that income dwindled over time. In 2003, Tree Canada’s board of directors decided to step away from government funding, becoming a self-sustaining private organization. Its government funding came to an end two years later.

Today, Tree Canada is entirely privately funded, with over 85 percent of its support coming from corporate sponsors, such as CN, FedEx, Telus and IKEA, to name a few. The remainder of Tree Canada’s annual $5 million operating budget is raised through individual donors. The result: more than 80 million new trees have been planted in Canada, with another 800,000 putting down roots in 2016 alone.

“We create programs so that community groups, cities and municipalities can apply for funding for regreening projects,” Walker explains. “A lot of municipalities don’t have the infrastructure dollars to fix roads, let alone for parks to replace trees that have been cut down.”

Despite that, trees have an important impact on the lives of the communities in which they live. Trees clean the air and also help reduce the heat island effect, in which urban areas without trees can be as much as 6°C (10°F) hotter than their surrounding areas. Trees moderate that heat gain, which in turn reduces the need for air conditioning in the summer months.

Tree Canada provides education about the benefits of trees, as well as funding for tree-planting programs. One of those programs is TD Green Streets, which, since 1994, has provided funding for forestry projects in more than 500 municipalities. CN, meanwhile, has teamed up with Tree Canada to provide funding of up to $25,000 for the greening of municipal and First Nations properties across Canada, particularly in communities along its rail lines.

Tree Canada has also been active in adding new greenery to over 600 schoolyards, with programs like the IKEA Outdoor Classroom, where kids get to learn and spend time in outdoor environments. Outdoor learning has been shown to reduce students’ stress levels, improve performance and promote a greater appreciation for nature. 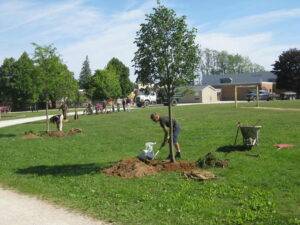 In recent years, Tree Canada has been helping communities deal with the effects of natural disasters, as well as tree diseases, such as Dutch elm disease, and infestations caused by the mountain pine beetle and the emerald ash borer. Operation ReLeaf has helped home and property owners get access to Treeazin, a pesticide injected into ash trees to protect them from the ash borer.

“We need to get the trees injected, to at least stave it off,” Walker says. “If not, in the next seven years all ash trees in Canada will be gone.”

That would have a significant impact, particularly in urban areas. Ash trees were a popular choice for urban planting in the middle of the last century, and those trees are now fully matured. In Montreal, for example, ash trees represent 13 percent of the urban forest canopy.

“Every time there’s a downpour, these trees take in about 100 litres of water,” Walker says. “Now that water goes straight into the sewer systems, and as we’ve seen in places like Toronto and Montreal, they can’t handle it and you get flooding.”

Removing those trees also has a direct effect on property values. According to a 2014 TD report, Toronto’s urban forest is worth an estimated $7 billion. Vancouver’s forests check in at about $4 billion and Montreal’s forests are worth between $3 billion to $4 billion. Landowners see the loss of trees reflected in lower property values. Walker cites the example of residential neighbourhoods in the Montreal borough of Montréal-Nord, which were once shaded by large, majestic ash trees. Many of those streets are now bare, and the neighbourhoods have been made less attractive as a result.

“Our goal is to develop tools to assist every single community in Canada to understand their urban forest, take them into account and catalogue them,” Walker says. “Every city is different, and every city’s needs are different.”

And as the ash borer crisis has shown, there is a definite need to diversify the species found in those municipal forests. 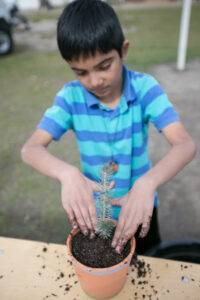 There’s no indication that Tree Canada’s activities will be slowing down any time soon. The organization coordinates over 300 events across Canada annually, including its Partners in Planting program, which enables companies to host an employee event centred on planting trees. The traditional company picnic has been replaced with a team-building activity that benefits the surrounding community.

“The most important thing is that at the end of the day we educate the public that trees aren’t just good for health or the environment but also for community building,” says Walker.

For more on Tree Canada and its activities, go to treecanada.ca.

Where do you think you’re going?

If you’re one of those self-reliant types who live in the city but bring in firewood from the country, you might want to give it some serious second thought.

The emerald ash borer first arrived in North America in the early 2000s, hitching a ride to Michigan on untreated wood pallets from Asia. It quickly spread from there and is now decimating North American ash trees.

“We, as humans, taking our firewood from the country to the cities, are the ones who transported it,” explains Richard Walker, Tree Canada’s Director of Communications and Program Development. “One key message is do not transport your firewood from your rural community to your urban community and vice versa.”