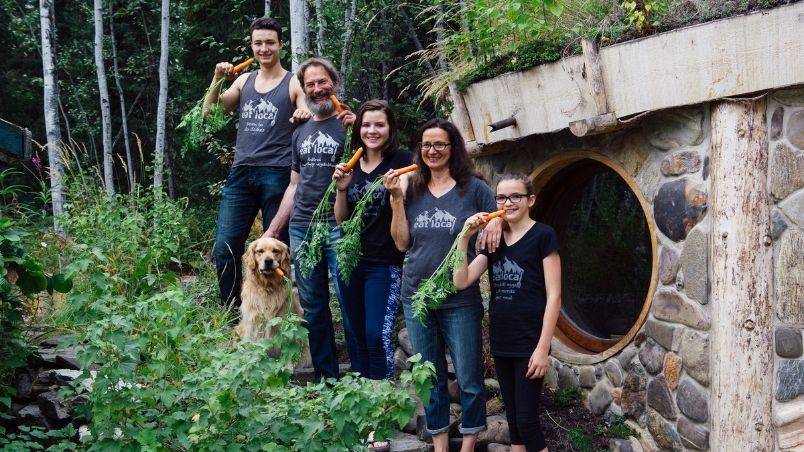 It was late 2017 when I first heard about Suzanne Crocker’s ambitious 100-mile diet, north of 60–style. She had started the 1-year challenge that summer, with her family in nervous tow. My selfish thought was, “What, no bananas? No avocados? For a year?” Crocker wrote about her emotional trials in Harrowsmith’s Spring 2018 issue, nearing the summit of their year-long edible Everest. This is a woman with fortitude and resilience!

First We Eat, a film produced and directed by Crocker, had its virtual world première at the Hot Docs Canadian International Documentary Festival in May 2020. Her documentary couldn’t be more timely, as food security has become paramount in the lives of Canadians, regardless of where we call home.

For Crocker, living just 300 km from the Arctic Circle—with no salt, no caffeine, no sugar, –40°C temperatures, three skeptical teenagers and one reluctant husband—is a genuine, inspiring feat. Imagine life without a grocery store to lean on!

Intrigued? Get a full dose of sustainability and homesteading in the film All the Time in the World, which follows the Crocker family and their adjustment to 9 months in Yukon’s unforgiving remote wilderness. Crocker’s children, then age 10, eight and five, share an honest reaction to life with no road access, no electricity, no running water, no internet and not a single watch or clock. And, I’m guessing, no bananas or avocados! This family is tougher than the Canadian Shield. All the Time in the World chronicles life’s natural unfolding and a family choosing to live in rhythm with the seasons, not a ticking clock. It’s a concept that we should all become more familiar with in these unprecedented days.

Harrowsmith: Tell us about yourself.

Suzanne Crocker: I have lived in Dawson City, Yukon, for 28 years and raised my three kids here. Dawson is where I call home. For many years, I was a family doctor in Dawson. I retired from medicine back in 2008 to spend more time with my kids. When my kids started making short films, I gave it a try and next thing I knew I had a new career! I am now a documentary filmmaker with two feature-length films: All the Time in the World (allthetimeintheworld.ca) and First We Eat (firstweeat.ca).

HS: So, where is the best place to sit down and have a coffee in your town?

SC: I like to cozy up by the wood stove in a hand-built log café—originally known as the Alchemy Café, soon to become Bon Ton—where you can enjoy a superb espresso as well as a taste of Shelby’s amazing charcuterie using only locally raised meats!

HS: When you go to the local farmers’ market, which vendor do you visit first?

SC: I always visit all the farmers at our local market. Who I visit first depends who is first to have a hot commodity that will sell out fast! When the first cherry tomatoes appear at Lucy Vogt’s stall, that will be the first place I visit. For farm-fresh eggs, peppers or garlic, I head first to Becky Sadlier of Sun North Ventures. For the first onions or a rare Dawson eggplant, you’d better visit Otto at Kokopellie Farm as your first stop. When the haskap berries are ripe, head to Mary Anne of Tundra Rose Garden. In the fall, when the first precious northern apples are harvested, I head first to John and Kim of Klondike Valley Nursery.

SC: Every business in Dawson is independent. We don’t have any chain stores, which is just the way we like it! If I had to choose one, it would be The Trading Post. You can find everything you need to spend a winter in the bush and then some. In the winter, Dave Robinson, the owner, is not at the counter—you might find him at the back of the store skinning a lynx.

SC: First stop, even before heading into Dawson proper, is always a car ride to the top of the Midnight Dome. From this vantage point, you can really get a sense of Dawson and the majestic wilderness that surrounds us. Walk a little way off the road to look down onto Dawson City nestled at the confluence of the Yukon and Klondike rivers. Walk the short distance to the top of the Dome and look north to see the Ogilvie Mountains, west to see the Top of the World Highway winding its way to Alaska, and north to see the Yukon River as it flows towards the Bering Sea.

Second stop: A boat ride on the Yukon River, with a stop at a gravel bar to make a campfire and roast some moose sausage!

SC: Mile 0 of the Joe Henry Highway, which is located at Dawson’s infamous watering hole, the Westminster Hotel, a.k.a. The Pink Palace. It’s more commonly known by locals as The Pit.

FYI, Joe Henry Highway is more commonly known as the Dempster Highway. Joe Henry is the Tr’ondëk Hwëch’in citizen who guided the crews through the mountains to build a road from Dawson to Inuvik [Northwest Territories].

SC: When it comes to unique events, Dawson has many to choose from: the Christmas Boat Parade (and it’s usually –40°C); Thaw di Gras in March (don’t miss the belt sander race, chainsaw toss and tea-boiling contest!); the “Ski-Doo drop” during Trek Over the Top.

The IODE Ice Pool celebrating “breakup,” the moment when a tripod on the ice of the Yukon River starts to move, triggering a clock that determines which lucky Yukoner has guessed the day and time of breakup, down to the minute. [Editor’s note: Prior to this issue moving into layout, Suzanne informed me that this year the ice broke on the Yukon River at 5:03 p.m. on May 5. “After picking May 5th for the past 30 years, my husband’s ticket was the winner!” she emailed. “What is more remarkable is that out of 30,000-plus possible minutes that the river could have gone out, there were five tickets for May 5th at exactly 5:03 p.m.!”]

The Sour Toe Cocktail! Bevy up to the bar at the Downtown Hotel for this unique Dawson tradition. Instead of an ice cube, your drink will contain an amputated toe. (Seriously!)

HS: What’s the most notable event in your town’s history?

SC: This entire town of Dawson is a national historic site. We still have dirt roads and boardwalks instead of sidewalks! Although the gold rush of 1898 is probably Dawson’s most well-known historic event, there are many other very significant events in our history. Dawson is located on the traditional territory of the Tr’ondëk Hwëch’in. In 1998, 100 years after the gold rush, Dawson became one of the first self-governing First Nations in Canada. Dawson has a rich, vibrant and active First Nations culture that is shared and celebrated with the entire community.

SC: In the winter, follow the dog mushing and Ski-Doo trails upstream on the frozen Yukon River. Within 5 minutes you will be out of eyesight and earshot of town and surrounded by pristine, quiet, snow-clad wilderness.

In the summer, follow the Crocus Bluff Trail, through the forest, snacking on spruce tips, wild rose petals or highbush cranberries along the way. At the end of the trail, look out over the confluence of the Yukon and Klondike rivers.

On June 21, the summer solstice, make your way to the top of the Midnight Dome to watch the sun rise a few minutes after it sets!

SC: On Friday nights it’s my kids’ turn to cook and my turn to do the dishes! But on the rare occasion that no one wants to cook, we would go to Joe’s Wood-Fired Pizza for takeout.

SC: There are too many to count! But Caveman Bill gets the popular vote. Originally from Toronto, Caveman Bill moved to Dawson in 1996 and he has lived in cave ever since. Bill’s cave overlooks the Yukon River, has no road access and is heated with a wood stove. Bill canoes home in the summer and walks across the frozen river in the winter. At one point, Bill even had cave chickens!

SC: My favourite roads are seasonal. In winter, the Ice Road across the Yukon River. In summer, Writers Block, which is a short stretch of Eighth Avenue, where you can find the cabins of Robert Service and Jack London, as well as the childhood home of Pierre Berton.

SC: Dawson is a community of amazing home gardeners. We have a short (66 consecutive frost-free days) but intense (24 hours of sunlight) growing season. The highlights of what Dawson gardeners can produce can be found at the Discovery Days Horticultural Fair mid-August—anything from giant cabbages to such exotics as a Yukon-grown peanut!

SC: Pristine clean air and spruce trees, with a hint of wood smoke in the winter.