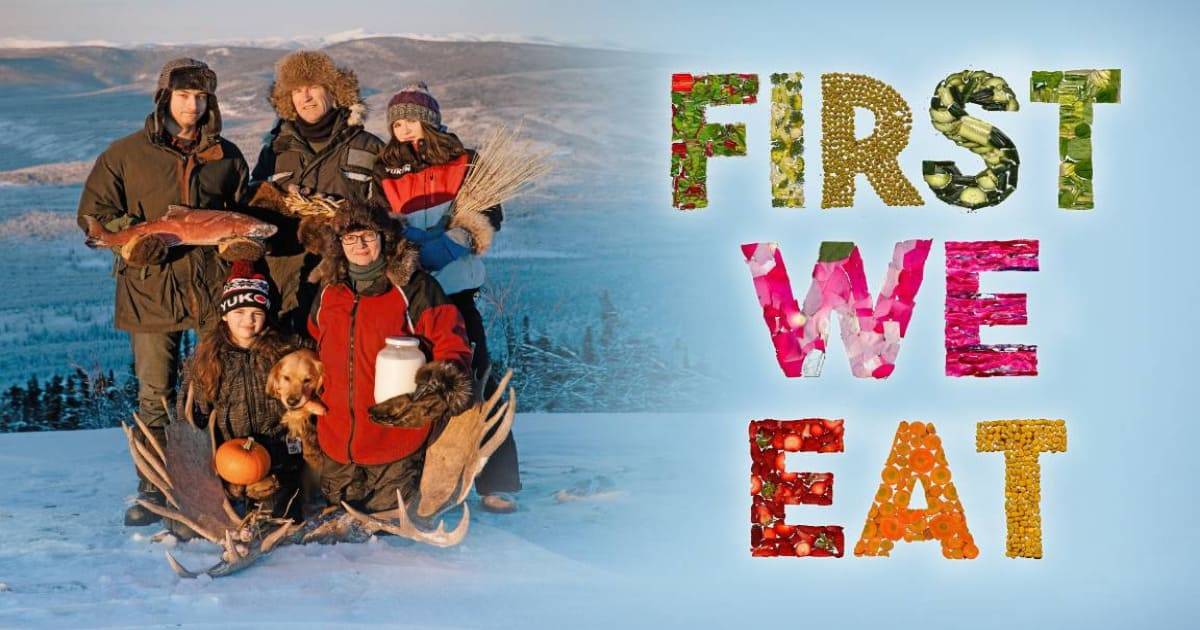 A family’s year-long challenge to live off the land where the Arctic Circle is closer than any major city - 3 skeptical teenagers, 1 reluctant husbandno salt, no caffeine, no sugar and -40 temperatures
By Suzanne Crocker

Putting food security to the test in the far North of Canada – filmmaker Suzanne Crocker, living just 300 km from the Arctic Circle, removes absolutely all grocery store food from her house.

For one year, she feeds her family of five, only food that can be hunted, fished, gathered, grown or raised around Dawson City, Yukon.

Add three skeptical teenagers, one reluctant husband, no salt, no caffeine, no sugar and -40 temperatures.

Ultimately the story becomes a celebration of community and the surprising bounty of food that even a tiny community in the far North can provide.

After all, “First we eat, then we do everything else.” – MFK Fisher

“Inspirational! Suzanne Crocker’s amazing experiment shows that even in the far north with strong individual, family and community effort, local food can feed us year round.”

“10 of the Most Exciting Films” – Indie Wire

“An absorbing documentary about resourcefulness under pressure and a woman’s determination to finish what she starts….extremely well-crafted … gorgeously shot… packed with tension” – Susan Cole, POV Magazine
http://povmagazine.com/articles/view/hot-docs-review-first-we-eat

“Viewers keen on putting their own culinary struggles in context will not want to miss this snapshot of what it’s like to mine for resources as if one’s life depended on it. For the Crockers, it really did.” – Eric Kohn, Indie Wire

“In Crocker’s skilled and empathetic hands, the film doesn’t pull any punches about the difficulties faced by her family and the push-back she often receives”
– Andrew Parker, The Gate

“If you thought a month in lockdown without MacDonald’s was a challenge, try this!”

“Let it be said: the Crocker family never shies away from a challenge… With their collective commitment to sustainability constantly teetering on the brink of collapse, this charismatic documentary keeps you on tenterhooks and ultimately sends you home with a few recipes you won’t find on the Food Channel.” – Vancouver International Film Festival

The Current with Matt Galloway – CBC Radio One (June 2020)

“This Yukon woman wanted to live off local food for a year. That meant getting her teenagers on board”

Feature Interview with Suzanne and Family

“In Canada’s Far North, We Ate Only Local for a Year – I Was Transformed”

“It’s ridiculously hard to eat local in the Yukon”

Award winning director Suzanne Crocker has become known for turning her camera on herself and her family as she takes them through some rather extreme adventure/experiments.

All The Time In The World (2014) won 22 Festival Awards from around the world including Top 20 Audience Picks at Hot Docs and Most Popular Canadian Documentary at VIFF.  Translated into 12 languages.  Allthetimeintheworld.ca

Suzanne turns her camera on herself and her family once again in their latest adventure First We Eat.

I live in Dawson City, Yukon, a Northern Canadian community of 1500 people at 64 degrees North, 300 km south of the Arctic Circle, on the traditional territory of the Tr’ondëk Hwëch’in.  Dawson is literally at the end of the road.  The nearest Starbucks is 550 km away.  We are dependent on a single road that connects us to the south – one road that trucks 97% of our food from thousands of kilometers away.

A few years ago, the only road into the Yukon was cut-off by a landslide. Grocery store shelves began to go bare within 48 hours. That was my wake up call.

I started to pay attention to the labels on my food and noticed how far it had travelled. The implications of depending on food from afar gained new meaning. I learned that over 50% of the vitamins in fresh greens are lost within the first 5 days after picking. I questioned how much nutrition was left by the time it reached my plate.

I wondered if we, in Dawson, could produce enough food to feed ourselves.  I decided the best way to research this question would be to try it. I would use myself and my family as guinea pigs.  So, much to my family’s disgruntlement, I banished absolutely all grocery store food from our house for one year.

First We Eat is the result.

All The Time In The World – first feature POV documentary (2014)

Produced with the participation of:

Suzanne Crocker is a retired family doctor turned filmmaker and director. Her feature documentary All The Time In The World (allthetimeintheworld.ca) was screened in 25 countries around the world and winner of 22 awards. David Suzuki touted it as “A magnificent film.” You can follow Suzanne’s ambitious journey to establish food security north of 60 here: FirstWeEat.ca