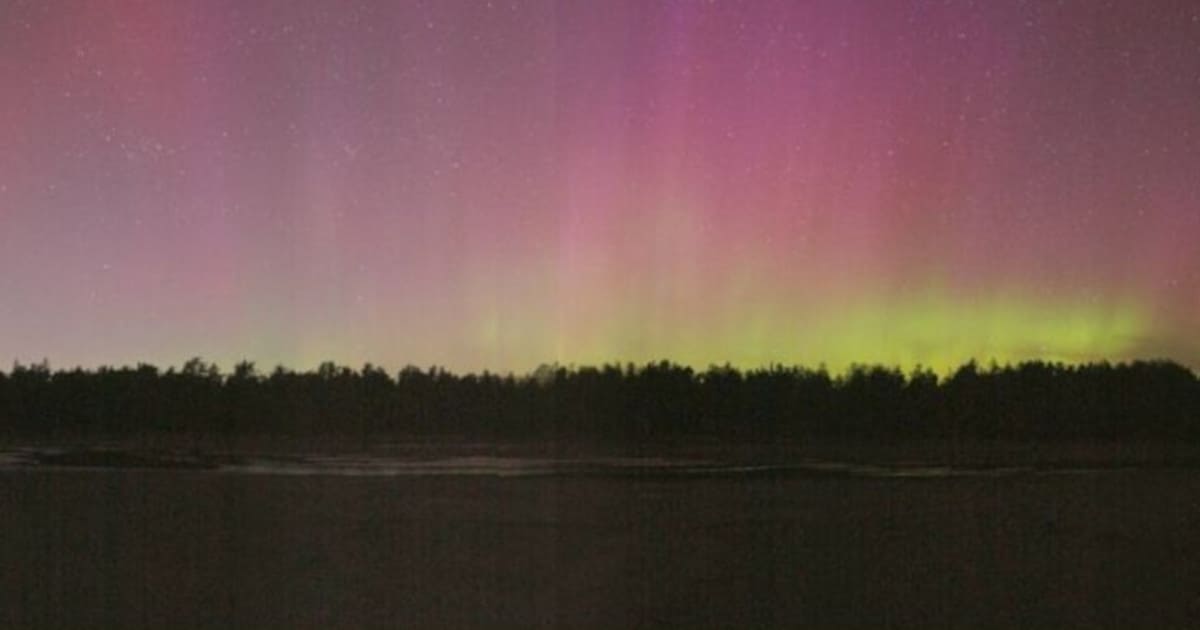 Robert Dick explores the northern lights and things that go “bump” in the night.
By Robert Dick

Serendipity makes life interesting. Unplanned events are the spice of life. Although most things astronomical can be predicted well in advance, some things seem random. To be clear, the aurora (called aurora borealis, or northern lights, when occurring in the Northern Hemisphere) is an atmospheric phenomena and not strictly astronomical, but it is caused by something celestial: activity on our sun.

We can predict the sun’s general activity, but not the details, and one of the details are explosive flares that eject particles out into space. Some of these may sweep by Earth, where they are ducted by our magnetic field down to the magnetic poles and excite atoms in our atmosphere to glow—like a fluorescent tube, but without the glass ampoule. And like weather on Earth, we can now predict this space weather and aurora events a short time in advance.

What might you see? This depends on the darkness of your sky and the strength of the display. A typical aurora display is easily washed out by urban skyglow, and bright lights in your field of view will prevent your eyes from becoming sensitive enough to take advantage of the display. So, find a dark spot with a low horizon and look to the north. The pressure of the space weather pushes the aurora activity toward the night side of Earth, so the displays are usually better after midnight, but some nice ones may be seen in the late evening.

An aurora usually appears as a faint arc of light low in the northern sky. It may even resemble the skyglow from a distant town or city. The difference is that the sky gets darker under the aurora close to the horizon. The faint arc may slowly brighten and expand upward. After tens of minutes or a few hours, this arc may develop vertical rays that grow upward. More intense aurora displays have these rays extending overhead—to the zenith, where they may converge into a corona, with rays that radiate out from its centre. Alternatively, the aurora may be seen as a large glow extending over half the sky. In the 1970s, I saw a particularly bright red aurora that filled the western sky and gave the impression that western Ottawa was on fire!

The more interesting auroras change in brightness: patches may pulsate over a few seconds, and rays or patches of light may shoot up to the zenith. Particularly intense displays may be bright enough for us to see colour (red, green and turquoise).

Would you like to record the aurora? A common DSLR camera does a great job of imaging the aurora. Attach your camera to a steady mount. If possible, set it to a high sensitivity (ISO 1600), and then set the lens to a wide angle and focus at infinity. If you have a particularly “smart” camera, you may have to turn off the autofocus, because the stars may be too dim for it to focus on. Open the shutter for about five seconds, and experiment with longer exposures. Exposures of more than 30 seconds will usually show star trails, but they will also show the treeline silhouetted against the sky, a nice effect.

Does this all seem too complicated? Then just go out for a late-night walk on a clear night, and look up.

If you would like to travel to view an aurora—as a focus for a holiday—then you can try Wood Buffalo National Park, which straddles the boundary between Alberta and the Northwest Territories, near Fort Smith. The park holds an August Dark-Sky Festival (tawbas.ca/dark-sky-festival.html), and you may be lucky to see a great aurora. To get good views of auroras closer to home, travel to dark skies where light pollution will not interfere.

In addition to space weather, there is also debris left over from the formation of the planets—4.5 billion years ago. Yep, some of that stuff is still out there.

During late-night walks, you may occasionally see a flash of light in the sky, off to the side of your vision. They are so fast that you may discount them as just your imagination. They appear as shooting stars, but they aren’t falling stars—the phenomena are much closer to home. These are officially called meteors.To get a better look, lie in a lounge chair and look up on a clear night sky. If it’s a rural sky, or if there are no artificial lights within eyeshot, you may be in for a treat.As Earth orbits the sun (at 30 km, or 22 miles, per second!), we sweep up this interplanetary debris. The high-speed collisions cause the debris to vaporize about 100 km (62 miles) up in our atmosphere. The kinetic energy is enough to cause the air along their path to suddenly glow, producing a streak of light.

We may see about five to seven meteors per hour. Occasionally, we sweep up a large particle that will produce a much brighter streak. Larger pieces may even explode, producing a fireball.

If you wonder why so many of these are still around, it’s because the smaller ones are being replenished by the comets that occasionally pass through the inner part of our solar system and leave behind a particle stream of icy dust. We see particularly rich showers of meteors when Earth orbits through these streams.

“Meteor showers are predictable, and there are especially rich ones in December and August. On the night of December 13, 2019, the moon was “new”, so it didn’t brighten the night sky – helping you see meteors radiating from the constellation Gemini, high in the east. The shower repeats in 2020 on the night of December 14, and again the Moon will be “new” so for two years in a row we will have a good view – weather permitting. The meteors will be slow and bright and may average about one per minute. The best display of the year is usually during the second week of August. Although this year (2020)  the last-quarter Moon will brighten the morning sky, the late evening sky will be dark for meteor observing. The meteors will seem to radiate from the constellation Perseus, low in the northeastern sky. This year peak activity will be on the nights of Tuesday and Wednesday, August 11-12. The Peak in activity is broad – so don’t be discouraged if a particular night is cloudy or you are only free on weekends. Before these dates, the Moon may interfere but afterwards the nights will be dark later in the morning. You will see the brighter meteors in late evening and after midnight a week before and after.”

When we are aware of activity in the sky, it’s easier to make time to experience the night. This extends our “natural” entertainment up until bedtime.