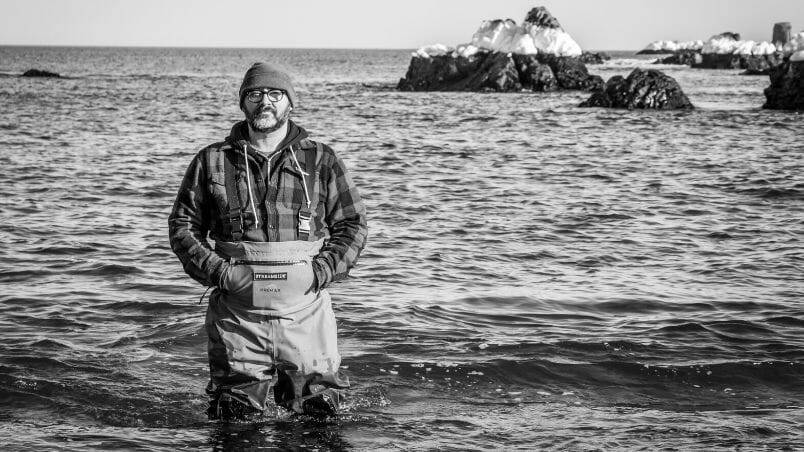 The phrase “salt of the earth” denotes a very good, honest person, and speaking to Peter Burt of Newfoundland Salt Company in Bonavista, Newfoundland, we realize the term couldn’t be more fitting.

Burt and partner Robin Crane make salt in Bonavista and sell it to chefs and retailers across the country. “Robin is from St. John’s, and my family is from Clarenville, about an hour away,” says Burt. “We moved here a year ago.”

Burt and Crane started the business back in 2012, when Burt was chef at Raymonds in St. John’s. “I was making salt out of Raymonds on the two days we were closed, and selling it at the farmers’ market and a couple of stores,” says Burt.

Eventually, that wore them out and they decided that they needed to give it up because it was consuming Burt’s days off, or they had to go full tilt at it. “So we sat back and really explored the idea,” says Burt. “We developed a business plan, put it all together, and that’s how we ended up here. We moved out here to Bonavista a year ago, got into our building in December and started operating in January of 2018.”

Production involves driving out to the shoreline about six minutes away to fill their water tanks, which are brought back to the shop, Burt explains. “Yesterday, we took the day to drive to Spillars Cove, Newfoundland, and fill the two water tanks on our truck to take back to our big tank. Our big tank stores 50,000 litres of water in the building, and from that we make sea salt,” he says. “We fill our tanks at the shore. We hook up the pump at the water’s edge, and we pump the water 85 feet up the hill to our truck (a 2013 Tacoma), which carries two containers that take 1,000 litres each, and then we drive it here and pump it into the big tank.”

Burt says the whole process takes about a half hour, and then it’s back to the shoreline to refill until the big tank is full. “We fill up every two weeks; we try not to let it empty; we’re always adding water back into the pot,” he says.

The facility they produce their salt in is a 1,500-square-foot, 115-year-old building. “We have two large boilers where we filter and boil the water,” says Burt. “The saltwater around here can be about five percent salinity. We’re boiling off the other 95 percent of the water. The method I use is a rapid boil method; it’s something I developed when I was at Raymonds. We boil it fast to get it from five percent to 90 percent salinity. If you go slow, you will get salt crystals forming.”

Coming up with his own method didn’t happen overnight, however. “It took a lot of trial and error to get the product we have now,” says Burt. “I go as fast as you can to get it to 90 percent, and then I go as slow as you can. I have two boilers that go very fast, and then I have pots that go very slow. When I put it into the slow pot, it can take six to seven days or longer to come down, and that’s where the salt is made. Good salt forms on the surface of the water. It forms a full sheet, then gets thick enough that it collapses to the bottom of the pot. Then I remove the salt from the water, and it’s a flake. That’s the technique that I’ve developed to get the flake sea salt we sell.”

For Burt, producing salt is all about the idea of merroir and terroir. “The water here is pristine. The town itself has a population of 3,000 or 4,000 people. We’re on a cape, so we’re right out in the ocean, right at the point, between Bonavista Bay and Trinity Bay. The northern current comes down the Labrador Strait from Iceland and Greenland, all the way down to where we are, and that’s the water we’re using, so it’s very clean water. I taste the ocean in it when I eat the salt. Sea salt everywhere in the world tastes a little bit different because of where it’s coming from,” says Burt.

“I was a chef for 24 years, and cooking professionally, salt is the most important ingredient. The difference between a good dish and a bad dish is seasoning. In Vancouver, before I moved home, I asked the question, ‘Why don’t we do it? Is something wrong with the water?’ No, there isn’t. But traditionally in Newfoundland you import everything. They never made it here. And we don’t have a lot of sun hours to do the traditional method. So I use technology to do it well here. When I moved home, I saw the opportunity to do it here,” says Burt.

Right now the company sells salt through a storefront at their production facility, as well as on their website and wholesale to various stores in Newfoundland. They also have stores in Halifax, Toronto, Montreal, Vancouver and Calgary selling their products.

“Newfoundland has a very good name, for quality products,” says Burt. “Being a chef, I have high standards in what I do, and that comes through in the product. We’ve approached marketing our salt through chefs. When we got up and running a few months ago, we gave salt to our chef friends, for feedback and to use in their restaurants. They use it and they tell people and they buy it there or they buy direct from us.”

So far the response has been very good. “There aren’t many Canadian sea salt makers,” says Burt. “We’re standing up against other products in the world, and I think they’re good products. I have 30 different salts at home. When I go somewhere, I get the salt from that place and bring it home. You’re tasting the terroir of that environment where it’s made and the ocean that it’s taken from. There’s nothing more Newfoundland than the ocean that surrounds us, and we’re consuming it now.”

Still, it wasn’t easy getting to this point. “It took years before I was legally allowed to sell it,” admits Burt. “There is a lot of red tape. In Newfoundland, when I approached the government to get it food approved to sell it at the farmers’ market in St. John’s, they didn’t know how to deal with it. It was very challenging in the beginning. And then when we moved out here, I knew how to do it. There are permits. We have a food-safe building, like a kitchen, so there’s a food licence. There’s a permit to be able to take the water resource and turn it into a nominal gain. We have to send away water samples and finished product samples, periodically, for testing, to make sure nothing is wrong with it. It comes with its share of regulations.”

Sustainability is also an important consideration for Burt. “I was involved with Ocean Wise when I was in Vancouver, and Raymonds was Ocean Wise as well,” he says. “I certainly believe in making sure the ocean is there for the future. I personally don’t buy certain products because I don’t believe we should be targeting them. I think we should only be taking certain things and making sure to take them properly so as not to destroy the environment. We made a conscious effort to not use plastic in our packaging. It’s an added cost to us—we bring glass bottles to Newfoundland, fill them with salt and ship them out. Everyone told us not to use glass because it’s heavy, but I didn’t want a container that will just turn into garbage. Going to the beach all the time, I see so much garbage wash up on the shore. People should be more conscious of what they do with the ocean.”

Fortunately, the local chamber of commerce is trying to support Burt in his beliefs. “We use kraft paper to protect the packages and ship products out, instead of Styrofoam peanuts, which are so bad. But we receive things in cardboard boxes, and we can’t recycle cardboard here—I actually drive it into St. John’s. So the chamber is investing in a cardboard box chipper so we can use it to pack and ship our products in. It will save us the cost of using kraft paper to protect the bottles from breakage, and we won’t be throwing out cardboard anymore,” he says.

Upcoming plans for the company also include adding flavours. “We’re working on a smoke sea salt, and will do a seaweed salt, too,” says Burt. “We’re also working on a spruce tip flavoured salt and green alder seasoned salt. The alder is a tree that’s everywhere around here. In spring, their flowers come out as a bud, and if you pick that and dehydrate it and grind it up, it becomes very floral with hints of citrus, so I mix that with the salt. We didn’t want to bring in lemons to flavour my salt. We’re doing things I can buy locally or forage.”

For Burt and Crane, producing salt is a year-round endeavour, which can be especially difficult in Canada’s harsh winter climate. “I am exhausted at the end of the day when we fill the tanks. Right now, when the weather is good, it’s easy. In winter, when it’s minus, and you’re on the ocean and no matter what you do your hands get wet and everything is cold and the pumps don’t want to work right because everything is freezing, it’s a tough, tough job,” says Burt.

Then there are unforeseen challenges, too. “An ice pack came in this winter that filled the bay with ice for 4 1/2 weeks. We emptied our tanks, turned everything off and stopped production for two weeks. I drove out every morning at 8 a.m. and again in the afternoon around three o’clock to check if the ice had left, and the day the ice left, the next day we were pumping water. I think this year, as soon as the ice pack comes, we’re just going to go on vacation and leave,” he says, laughing.

While they’re hoping to expand their operations and hire two employees soon, for now it’s just Burt and Crane doing all the work. If that’s not salt of the earth, we don’t know what is.