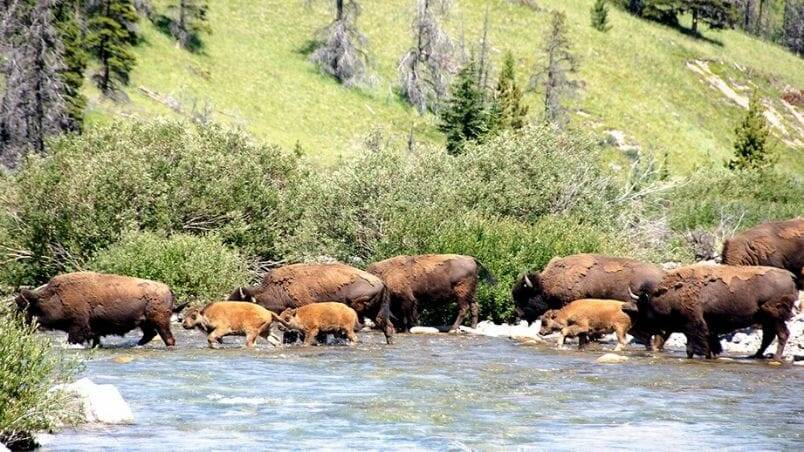 Where the Buffalo Roam – Bison in Banff National Park

In my early 20s, after a summer job working in the Colorado Rockies, I headed back north with a group of friends. Our plan was to finish off our season with a backpacking trip in Grand Teton National Park. En route, we detoured through Yellowstone National Park, where I was to experience my first close […]
By Kiley Torti

In my early 20s, after a summer job working in the Colorado Rockies, I headed back north with a group of friends. Our plan was to finish off our season with a backpacking trip in Grand Teton National Park. En route, we detoured through Yellowstone National Park, where I was to experience my first close encounter. We had the giddy thrill of being caught up in a buffalo jam. Our tiny car was forced to a standstill as we were engulfed by a giant herd of buffalo leisurely crossing the road. I was awestruck. Years later, en route to the Yukon, my husband and I were travelling the famed Alaska Highway in northern British Columbia and stumbled upon the Pink Mountain herd calmly grazing on the side of the road. For anyone who has had the privilege of viewing North America’s largest land mammal (they tip the scale at an average of 700 kg/1,540 pounds) in close range, it’s an exhilarating experience and a sobering reminder of their thunderous past. 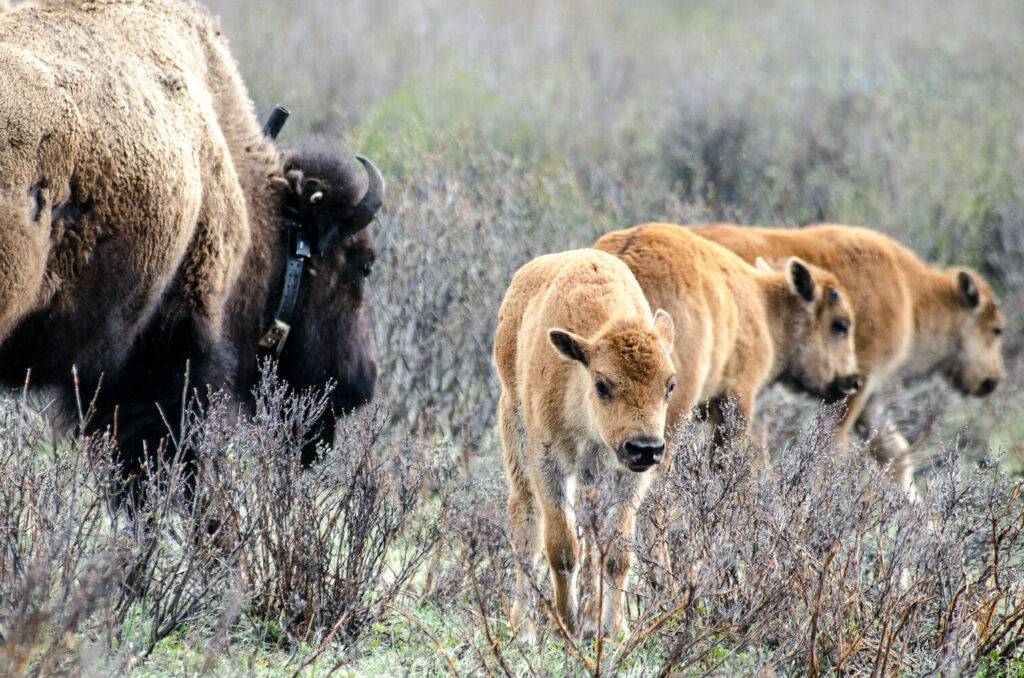 In the 18th century, the bison population was estimated to have been anywhere between 30 and 70 million. By the 19th century, the population was on the brink of extinction, heavily decimated by the superfluity of sport hunting. The magnitude of slaughter escalated when the railways got on board and promoted hunting by rail. Bison numbers dropped shockingly low, with some reports showing less than 600. As the thunder of the mass migrations faded, many First Nations lamented that the Great Plains had lost its heartbeat. The pulse was soft, but we owe the preservation of this dwindling species to the visionary efforts of a few far-sighted ranchers who rounded up the remaining wild herds for protection.

While the popular Yellowstone herd has made a comeback and remains the largest free-ranging herd in North America, Canada has quietly been playing a role in bringing back the bison. Reintroduction efforts have stemmed from a base herd in Elk Island National Park, approximately 35 km (22 miles) east of Edmonton. Farm and commercial efforts aside, there are wild herds in Prince Albert National Park and Grasslands National Park in Saskatchewan, the aptly named Wood Buffalo National Park in the Northwest Territories, and small captive herds in Riding Mountain National Park in Manitoba and Waterton National Park in southern Alberta. The Commission on the Status of Endangered Wildlife in Canada (COSEWIC) lists the species as threatened. However, one of the challenges facing the bison is a lack of consensus between provincial and federal government designations. In British Columbia and Saskatchewan, bison are listed as wildlife. In Alberta and Manitoba, they have protected status while they are within the boundaries of national park land, but as soon as they wander over the invisible line, they are considered livestock and thus subject to a different set of management laws. 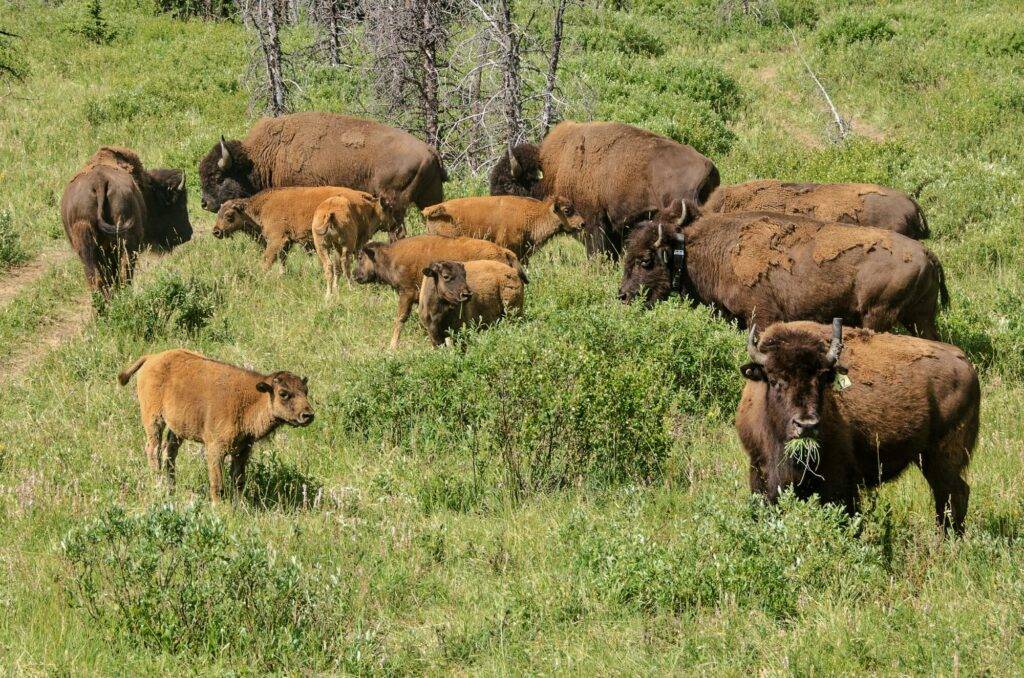 So, what about the bison in Canada’s first national park? The last wild bison in Banff were recorded in the late 1870s. In 1898, the then-named Rocky Mountains Park (now Banff National Park) created a bison paddock with three bison from Texas and, later, a few surviving members of a herd from Manitoba. This “buffalo park” was accessible to visitors and remained on the outskirts of the Banff town site until 1997. The 1996 Bow Valley Study declared the enclosure as an impediment to the natural movement patterns of the other non-captive wildlife in the area, such as grizzly bears, black bears, cougars, wolves, elk and deer. The captive herd was relocated and the paddock removed to help facilitate more natural movement through an established wildlife corridor.

In 2009, the Banff National Park management plan reviewed a draft looking at the possibility of reintroduction of bison to the park. The Eleanor Luxton Historical Foundation threw their support behind bison restoration and the creation of a community, citizen-based effort. The group Bison Belong was formed to help drive the campaign and educate the public on the ecological, cultural and historic values of bison in Banff National Park. In 2012, the Canadian government and Parks Canada began public consultation. In 2014 and 2015, the Northern Tribes Buffalo Treaty was signed by members of First Nations on both sides of the Canada-U.S. border. The treaty is a historic agreement uniting tribes in an alliance focused on bison conservation. Buffalo was an integral part of the culture for many First Nations across the Great Plains—reintroduction would facilitate greater subsistence, cultural and spiritual connections. As more voices joined in unison, the rumble of the bison began to grow, and in 2015, the government dedicated $6.4 million in funds to reintroduce a free-grazing herd of bison back into Banff National Park. 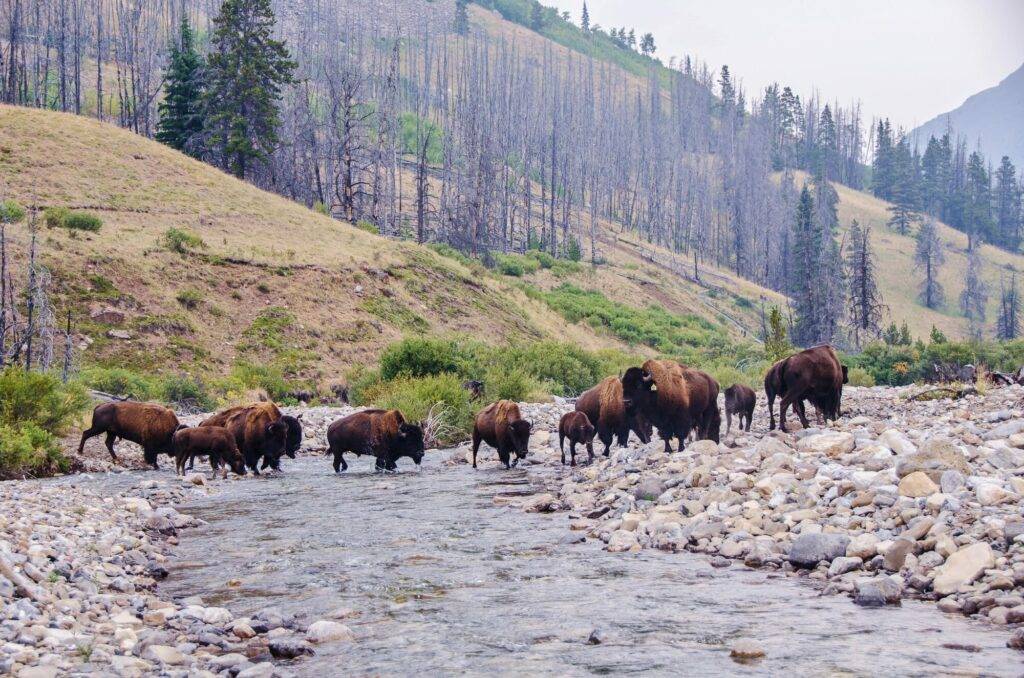 Work on the five-year project began immediately, and a 2,137-acre parcel of land in the Panther Valley in the eastern slopes of Banff National Park was burned to restore the ecosystem to that of the original grassland habitat of the bison. The burning of valleys in this area was part of a traditional First Nations practice when they transitioned from summer hunting grounds to their winter camps. In February 2016, a total of 16 healthy bison were translocated from Elk Island National Park to a remote site approximately 40 km (25 miles) north of the Banff town site. Their journey was not an easy one. Groups of three or four bison shared chilly shipping containers, loaded on the back of trucks, and made an eight-hour trip to the historic Ya Ha Tinda Ranch. Upon arrival, the assigned caretakers on the overnight shift played Mozart to help settle the bison’s travel-weary nerves. The next morning, the bison had an exciting helicopter ride as the shipping containers were carefully slung to their final destination.

Their new home was a 45-acre fenced, soft-release pasture that would allow the park’s biologists to continue to study and monitor the herd, ensuring that they remained healthy and disease-free. Among the 16 bison were 10 pregnant females and six bulls. The females were two to three years old and specifically chosen to help grow the population of the herd in their new home. Within the timeline of the project, the hope was that the females would calve twice in the area, helping to anchor them to their new home and develop a bond with the land. This was an important consideration in the project, as the hope is that the bison will find a home range within the boundaries of the park and not wander into adjacent ranch lands. 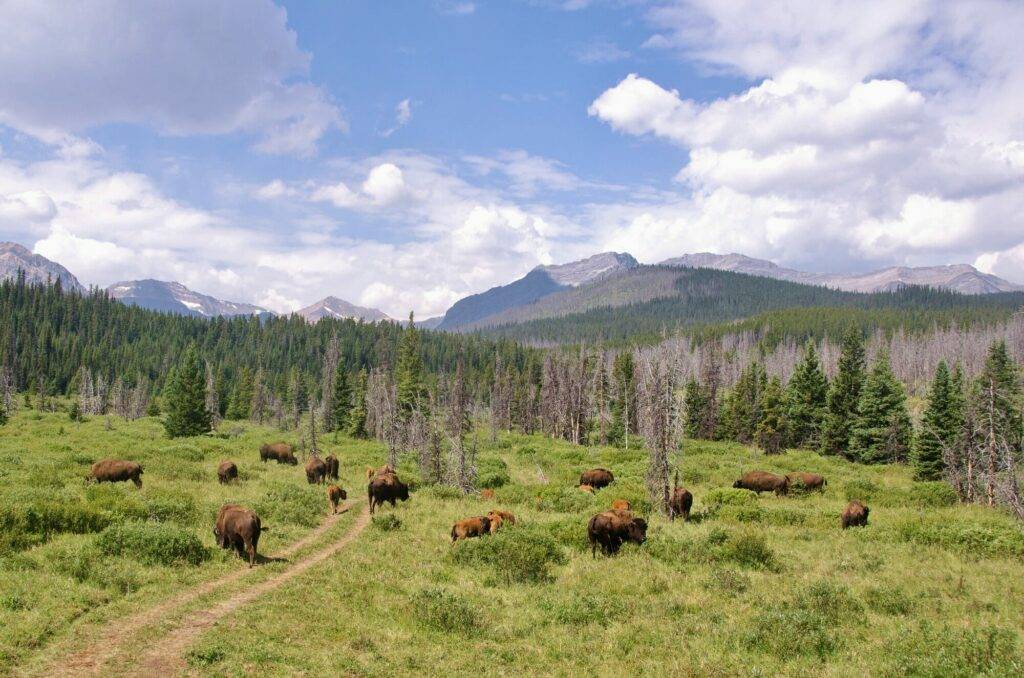 In a moment of serendipity, on Earth Day 2017 (April 22), the first bison calf to be born in Banff National Park in 140 years took its first few shaky steps on new ground. Between April and May, a total of 10 calves were born, boosting the herd number to 26. In spring 2018, Parks Canada staff is eagerly anticipating more new arrivals to the herd, as well as the release of the bison from the fenced areas to a larger, 1,200 km (745 mile) reintroduction zone in the Panther and Dormer valleys. Over the next four years, Parks Canada will use radio collars to monitor the free-roaming phase. Tracking the bison and monitoring their movement and land-use patterns will provide data crucial in formulating a successful management plan.

So why bring back the bison? It’s an opportunity for redemption of past mistakes, and it offers hope for the future. Bison are an ecological and cultural keystone species and humble landscape engineers. Their wallows form ephemeral pools that create habitat for toads, wetland plant species and birdlife. As herbivores, their grazing activities lead to increased nutrient levels in the soil, assisting with seed dispersal and building plant diversity. The birds are also excited for their return. Ravens and magpies are now enjoying more luxurious nests and have been spotted boldly pulling shedding hair from bison flanks. Cowbirds are gleefully riding on the backs of the bison and following behind, feasting on insects kicked up by heavy hooves.

While the remote location of the bison was meticulously chosen to allow the herd space to flourish beyond the reach of camera-toting tourists, as a backcountry enthusiast, it does excite me to know that this giant herbivore is re-establishing its rightful place back on its traditional landscape. As the population grows and continues to thrive, I hope that the sound of the thunder returns. Perhaps one day, as I climb up to a mountain pass, my efforts will be rewarded with a glimpse of this noble animal on the horizon and we will feel that heartbeat on the landscape once again. Give me a home where the buffalo roam! 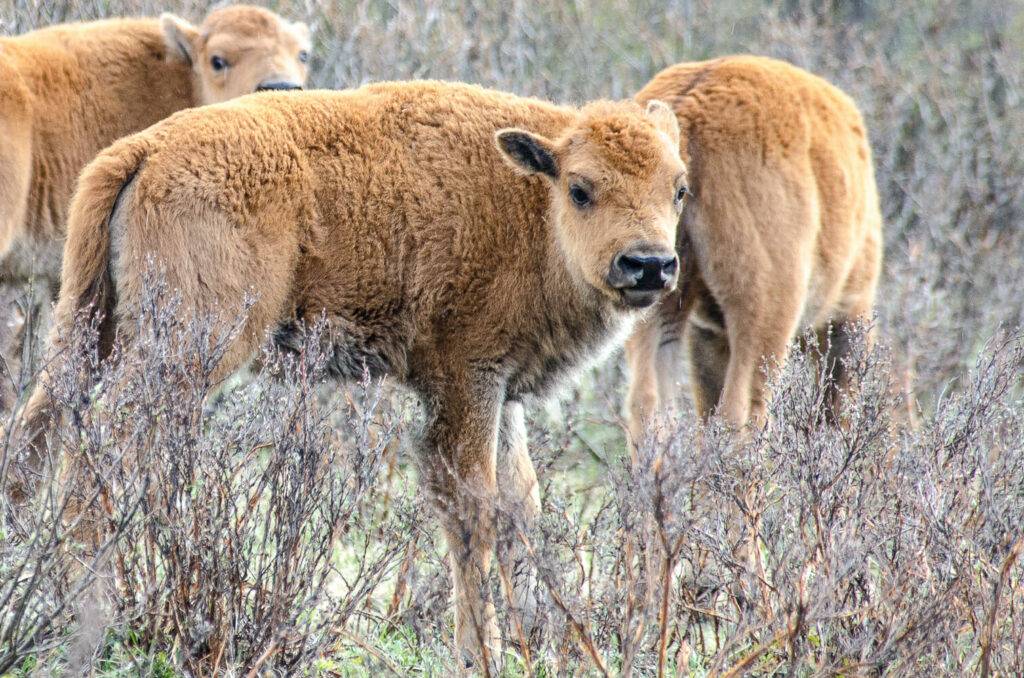 While the terms buffalo and bison are used interchangeably in North America, the true species name is bison. However, First Nations have historically referred to them as buffalo. Early European settlers also identified them as buffalo, linking them to their Asian and African counterparts. In North America, there are two subspecies of bison: the wood bison and the plains bison. The wood bison tends to be larger than the plains bison, and while both species historically inhabited areas of northern Canada, the plains bison thrived farther south, with herds as far as Mexico. They are equally comfortable in mountains and forest land as they are in dry climates and desert grasslands.

Kiley Torti is a health and fitness professional living in Banff, Alberta.  She is an Ontario refugee who is happiest when wandering through the backcountry in pursuit of a Rocky Mountain high.  Hiking, biking, or skiing, she is always on the lookout for new adventures in far-flung places on her extended backyard.

Thinking of the Environment While Taking Care of Pests: Eco-Friendly Methods and Pesticides