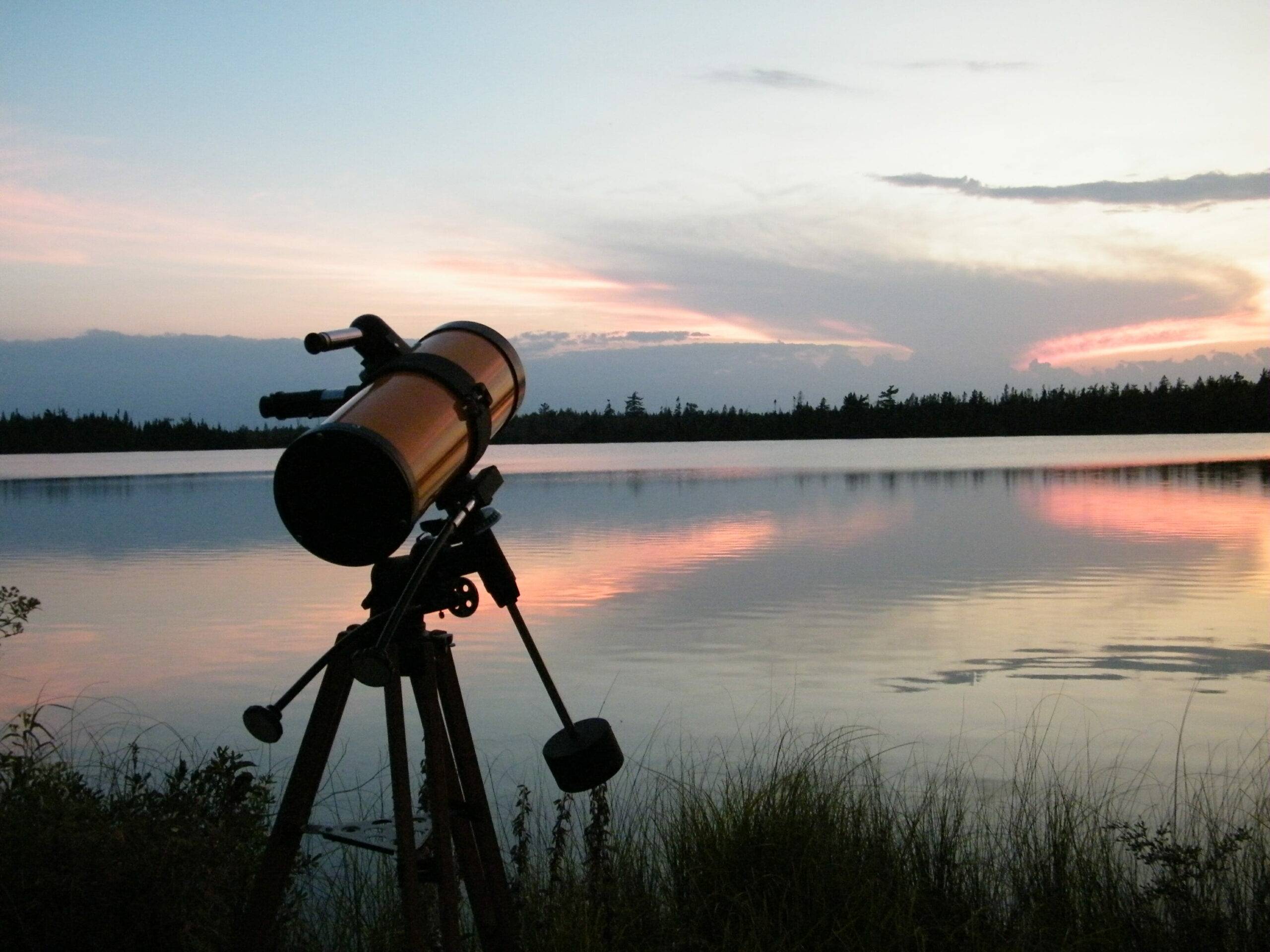 Where the Stars Align in Canada

I’ve been starry eyed for a long time. Growing up in the country, I took dark skies for granted. I thought everyone could simply step outside and sit under a chandelier of stars like I did. My mom routinely pulled us outside to observe some planetary event or meteor shower. On January 28, 1986, I […]
By Jules Torti

I’ve been starry eyed for a long time. Growing up in the country, I took dark skies for granted. I thought everyone could simply step outside and sit under a chandelier of stars like I did. My mom routinely pulled us outside to observe some planetary event or meteor shower.

On January 28, 1986, I was a young witness to the space shuttle Challenger disaster. Our entire elementary school was assembled in the gym, cross legged on the floor, eyes trained on the television on wheels that was rolled around the school, classroom to classroom, as needed. When the microwave-sized TV was parked in the gymnasium, it was a big deal. Everyone expected this moment to be monumental, but not in the catastrophic way that it was. The Challenger exploded 73 seconds into its flight, killing all seven aboard, including Christa McAuliffe of New Hampshire. She was to be the first teacher in space. There was a hush in the gym of Mt. Pleasant Public School, and I’m sure our principal said something calming and pivotal. But I don’t remember that. I remember thinking that it could have been one of our teachers—and their pale faces appeared to be thinking the same.

In that same year, I blew all my precious savings on a spacey Swatch watch (and at age 12, in a rural area, savings were hard to come by without a paper route or lemonade stand). In the spring, I picked all the pesky gravel out of the grass after a season of snow blowing. My grandfather’s tractor blew out half-snow and half our gravel driveway onto the grass. So, before I could move on to my healthier grass-cutting income, the gravel had to be painstakingly picked from the grass. All this for a coveted Swiss watch designed to commemorate the passing of Halley’s comet through the cosmos (which our family waited for all night, binoculars appropriately pointed, necks craned, all of us taking up every inch of an unzipped sleeping bag). I loved that Halley’s comet Swatch to the brink, until I submerged it beyond suggested submerging and the comet became clouded in fog.

There was an obvious juxtaposition of danger and magic about outer space, and 1986 was the beginning of my serious space scrapbooking efforts. I clipped out every newspaper article about the Challenger disaster and Halley’s comet. I began following Peter Preston’s astronomy column on the aurora borealis and lunar phases in the Brantford Expositor, cutting and pasting them diligently into my archive collection of all things cosmic. I even wrote a long-winded letter to Mr. Preston, requesting that he come speak to my class about star stuff. And he did.

The pinnacle of these amateur stargazing years culminated in a visit to the McLaughlin Planetarium, located beside the Royal Ontario Museum in Toronto. 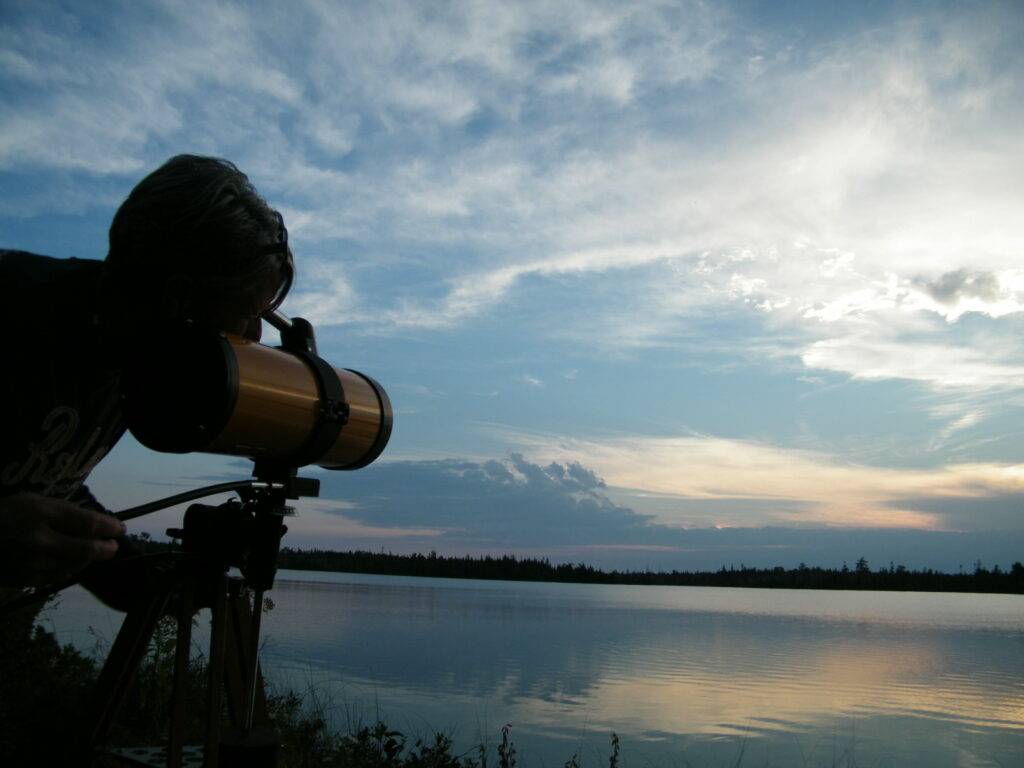 Students were often shuttled there for the prerequisite big day in the city. The laser light show extravaganza sadly dissolved in 1999, but for any child of the ’80s, the star-studded domed ceiling and the reclining seats of the planetarium were memorable on many levels. In addition to a fascinating lesson in cosmology, the dark theatre also lent well to human chemistry and clammy hand-holding under Cassiopeia and Betelgeuse. But that’s another story.

My fascination continued, and whoever bought our childhood home 20 years ago might still be cursing my creative efforts. Remember those adhesive glow-in-the-dark stars you could buy? In my teen years, I recreated the Northern Hemisphere night sky to spec, so it appeared inside like it did outside at 10 p.m. on a summer’s night. I wanted to be reminded of that golden summer at Bark Lake, during the Perseid meteor showers in August, when stars were falling out of the sky by the dozen. It was hard to believe that city people had to buy adhesive stars to actually see constellations at night.

Fast-forward to 2018 and astronauts have become genuine rock stars. Chris Hadfield is a genuine orbital guitarist and has made space cool for legions with his live recordings and tweets from afar. Light pollution abatement programs are being implemented across North America in many forms. What was the norm for my country existence is being preserved in the form of Dark-Sky Preserves, astronomy parks and designated Urban Star Parks.

I now live in a designated Dark-Sky Preserve and, fittingly, one of the chattels when we bought our house last year was the orange cannon-sized Magnicon telescope we admired on our first tour. Nearby, at the Lion’s Head marina, the Bayside Astronomy Club members share their galactic love and fancy telescopes with the public to encourage a greater connection to Jupiter’s moons and those very clusters that we wish upon. Though the McLaughlin Planetarium has been left in the dark, access to star parks and experts near city centres is an encouraging step. Another giant leap for mankind!

Whether the blackout of 2003 or the 1986 Challenger or a childhood planetarium visit or Neil Armstrong’s first step on the moon left its mark on you, the dates don’t matter. Falling stars are always the best excuse to take pause, wherever you are in the world, and a quick reminder of that magic above. Here’s our guide to the best places to see the stars align across Canada. 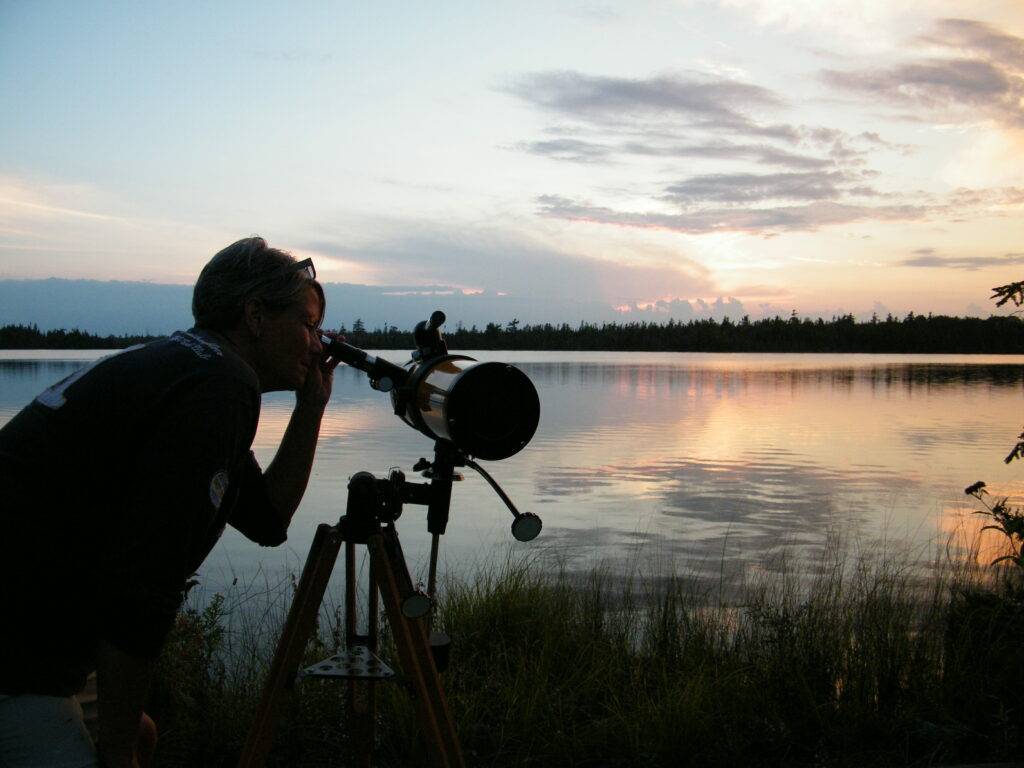 10 Places to Be a Space Oddity

Want to be the centre of the universe? Located in Kitsilano’s Vanier Park, just 15 minutes from downtown Vancouver, the much-loved planetarium is a hotbed for learning. In 1968, lumber magnate and philanthropist H.R. MacMillan wanted to bring space exploration closer to home. Thanks to MacMillan’s gift to the city, you can surf the solar system, fall into black holes and dabble in astrophysics in the Planetary Star Theatre’s rotating lineup of spaced-out content. spacecentre.ca

In 2013, our country’s largest national park was also designated as the world’s largest Dark Sky Preserve by the Royal Astronomical Society of Canada. The annual star-studded Thebacha & Wood Buffalo Dark Sky Festival held in August attracts newbie milky way lovers and space nerds alike. Looking for a front-row seat to the aurora borealis? It’s here. Pop your tent in late August through September or visit in December to February for the best showtimes. pc.gc.ca

In 2011, this park was designated as a Dark Sky Preserve by the Royal Astronomical Society thanks to its escape from light pollution. The Jasper Dark Sky Festival in October hosts Spacetalks, a symphony under the stars, dark-sky photo tours, Skytram star sessions and full-moon hikes. jasperdarksky.travel

The flat terrain of this park allows for a floor-to-ceiling window to the cosmos. Reserve a teepee or oTENTik (a combination of a tent and A-frame, which means a real bed to sleep in), or camp with your horse! One of Canada’s largest and darkest parks to observe deep-sky objects. pc.gc.ca

The first planetarium of its kind in northern Ontario, the 8.4 metre (28 foot) dome displays films about infinity and beyond. Travel billions of light-years away without the G-force or gravity issues. Or dehydrated ice cream. sciencenorth.ca

Included with your ferry fare from Manitoulin Island to Tobermory this stargazing tour will have you taking in the stars from the ship’s deck and learning about Ojibwa lore in Georgian Bay’s natural star-studded dome. Astronomy enthusiasts will help you decipher Orion’s Belt from the Big Dipper. ontarioferries.com

Pull an all-nighter here! Book a posh wilderness pod to crash in after viewing nebulas. The Long Point Observatory is Canada’s newest public astronomical observatory, located in one of the darkest pockets in southern Ontario. According to the website, the five metre (16 foot) Schmidt-Cassegrain telescope dials in on “celestial objects 10,000 times fainter than the faintest objects visible to the naked eye!” Woo the one you love with a tour of the nearby Burning Kiln Winery vineyard, a gourmet dinner prepared by David’s on Tour, and then wish upon stars at the Long Point Observatory. lpfun.ca

Step into the twilight zone at Quebec’s AstroLab! Take in a solid dose of astronomy, geology, biology and ecology mixed in with the history of the universe. Join guided daytime tours of the AstroLab and the Mount Megantic Observatory, where you can see the best-performing telescope in Canada (1.6 metres/5.2 feet) and “ride” the Space Elevator. Attend the August Perseid Festival for the late, late night show and shuttles to the mountain summit at 2 a.m. astrolab-parc-national-mont-megantic.org

10. Your own backyard. Or your friend’s backyard!

Download the Sky Map app and turn an Android device into your own personal planetarium. Simply point your phone at the sky, and an interactive star chart with help you identify the constellations. The phone’s gyroscope, compass and accelerometer sensors coupled with your location allow you to channel your inner Galileo. Search for specific celestial objects with Sky Map, which allows you to transport yourself back in time to see how the sky appeared at different points in history. Originally developed as Google Sky Map, it has now been donated and is openly sourced. play.google.com

Land Has Stories, We Have Choices

A Postcard from Fogo Island, Newfoundland