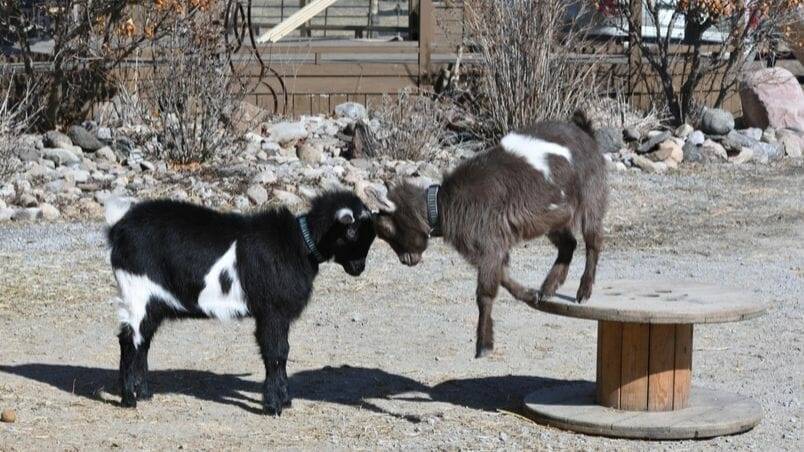 By Nicole Robertson Really and truly, the plan for the day was just to go and get some new chickens. Six chickens to be precise; six beautiful, homestead-raised Gold Laced Wyandottes. Sadly, in spring 2017, we had lost several of our young birds to a very hungry coyote mama who had babies to feed. So, […]
By Nicole Robertson

Really and truly, the plan for the day was just to go and get some new chickens. Six chickens to be precise; six beautiful, homestead-raised Gold Laced Wyandottes. Sadly, in spring 2017, we had lost several of our young birds to a very hungry coyote mama who had babies to feed. So, it was time for a top-up on the chicken front. I tracked down the owners of Bedrock and Brambles farm, owned by lovely young couple who, among other things, raised beautiful chickens. Saturday was supposed to be seamless: drive north, meet Andrew and Kira, visit a genuine homestead and get chickens. With cat carriers in hand, three chihuahuas on our laps, coffee in holders, sun shining and GPS loaded, we started the day innocently enough. But this is Caberneigh Farm, and if you have been following our adventures, you know there will be more to this story than just feathers. 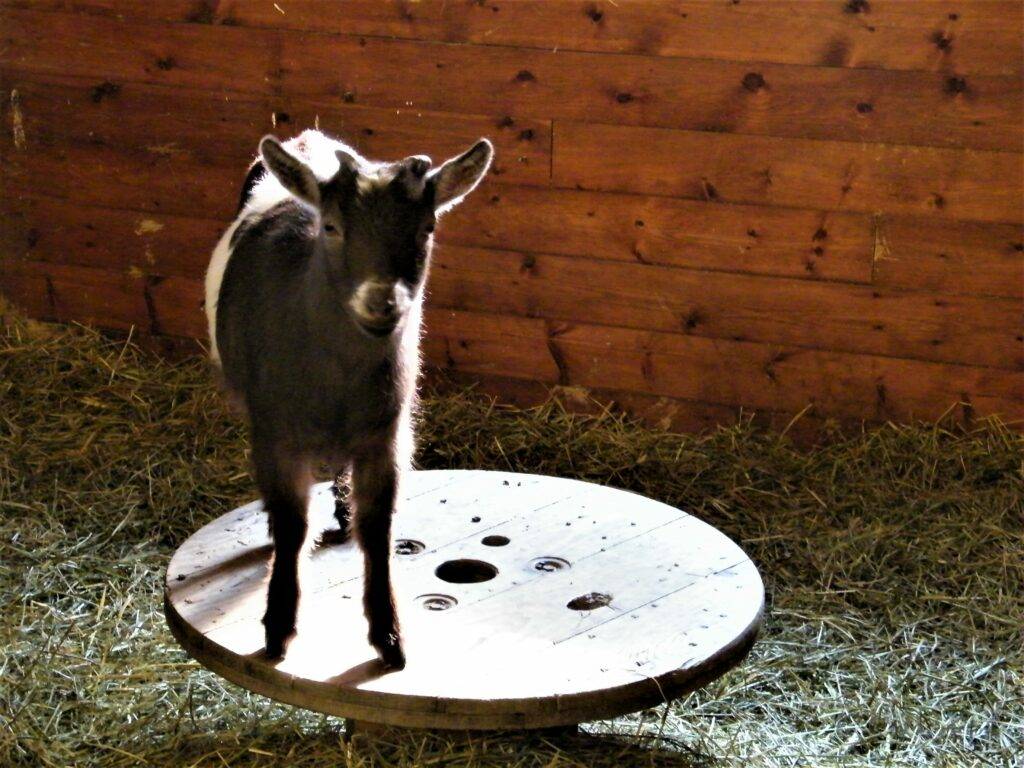 Now, before you judge us, let me say that we had done our homework. I knew that the farm we were buying our chickens from did, in fact, breed and raise Nigerian pygmy goats. I knew this because I have harboured a not-so-secret desire for itty-bitty goats for a long time. I had researched goats, met a few goat breeders and fawned over many a goat at local fall fairs. I was a Facebook goat video stalker. Caberneigh Farm was not going to be complete without itty-bitty goats.

It had been a very busy time at the farm. Major renovations had been dominating the budget and our time for many months. Gardening was in full swing. Horses needed to be exercised. Machinery needed to get stuck in muck in various places to test our problem-solving skills. Chickens, bees and Olive, the pig, needed wrangling. There was a lot going on. It was not the time for goats. 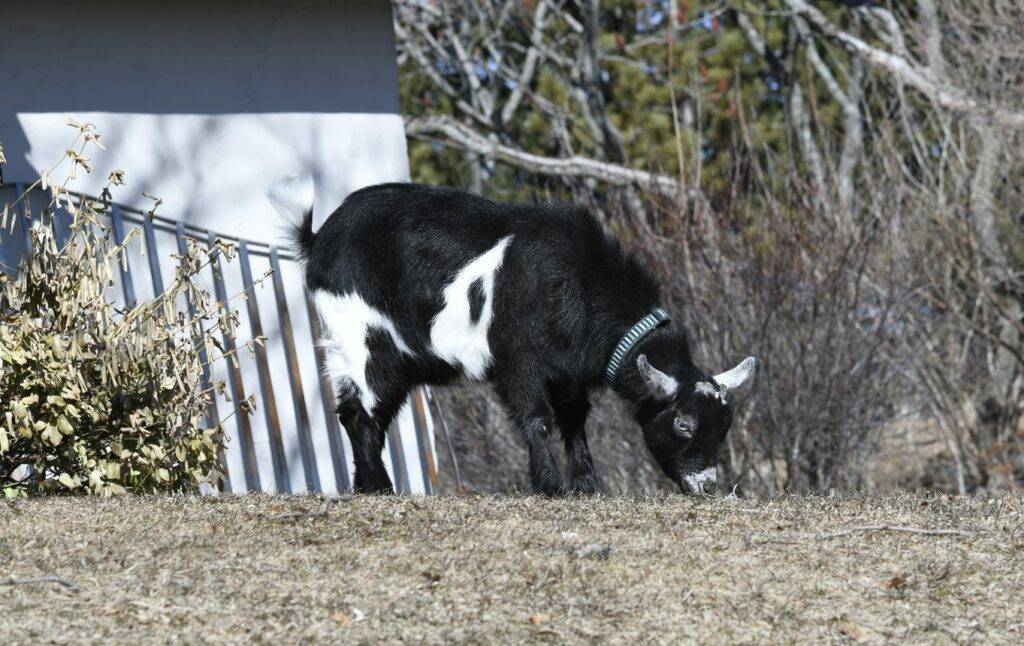 With all of this in mind, I readied myself. I know my weaknesses, so I checked the farm’s website. I was relieved to learn that all the baby goats had been sold for the year. The coast was clear. There would only be breeding does and billy goats on the farm. I thought we could introduce ourselves, buy our chickens, learn about their homesteading life, try to make a good impression and, with any luck, get ourselves on the waiting list for some cute goat kids for the following year.

At least that was the plan.

So we hit the road. We headed deep into the Canadian Shield north of Peterborough, Ontario, chattering away like magpies, only occasionally interrupted by the increasingly frustrated voice of our GPS. Salmon Lake Road seemed easy enough to find. But suddenly, without warning, she left us. No more cranky reminders of turn, stop or the dreaded “recalculating”—just eerie, worrisome silence. Not surprisingly, the farm’s website now suggests this: “GPS devices may give incorrect directions.” In our wild goose chase for chickens, we luckily came across a couple walking their dog. They very kindly, and with no small amount of mirth, were able to direct us out of the twilight zone that was the wrong side of Salmon Lake. 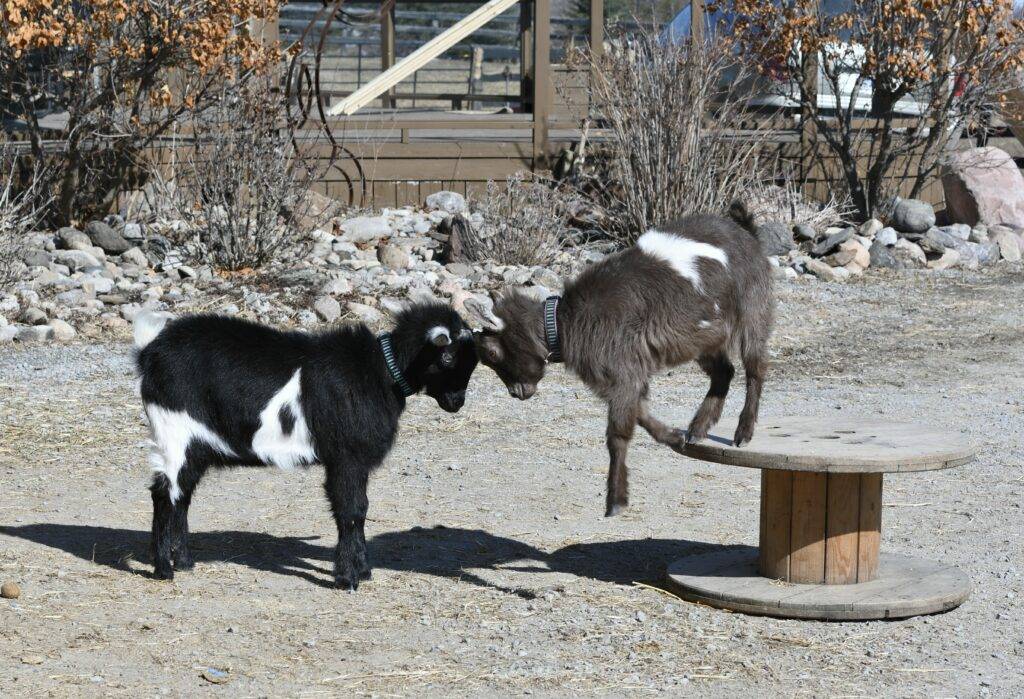 Much later than promised, we finally showed up (dent No. 1 in our efforts to make a good impression). Fortunately, Andrew and Kira, our charming homesteading hosts, were still game to talk chickens and farming. Their Gold Laced Wyandottes were beautiful. The turkey tom was intriguing in a Ridley Scott’s Alien kind of way. The billy goats were as aromatic as advertised, and the children were curious and helpful chicken catchers. But then my partner, PJ, and Kira wandered off to look at the does and that is when the trouble started.

You know where this is going.

There were baby goats. Two tiny, dehorned, neutered baby boys. Technical term: wethers. It was impossible to ignore their beautiful markings, white and chocolate milk and licorice black coats, hazel and glacier blue eyes, thundering little hooves and those heart-rending little baas. PJ stood rooted to the spot. We were going down.

Why hadn’t the goats been picked up yet? There weren’t supposed to be any kids. I looked to Andrew for salvation. I waited for him to say, “They are just waiting to go to their new home.”

“I thought all the babies were sold,” I squeaked.

“Well, they were but…” Andrew said, hesitating. Our goat fate was sealed. 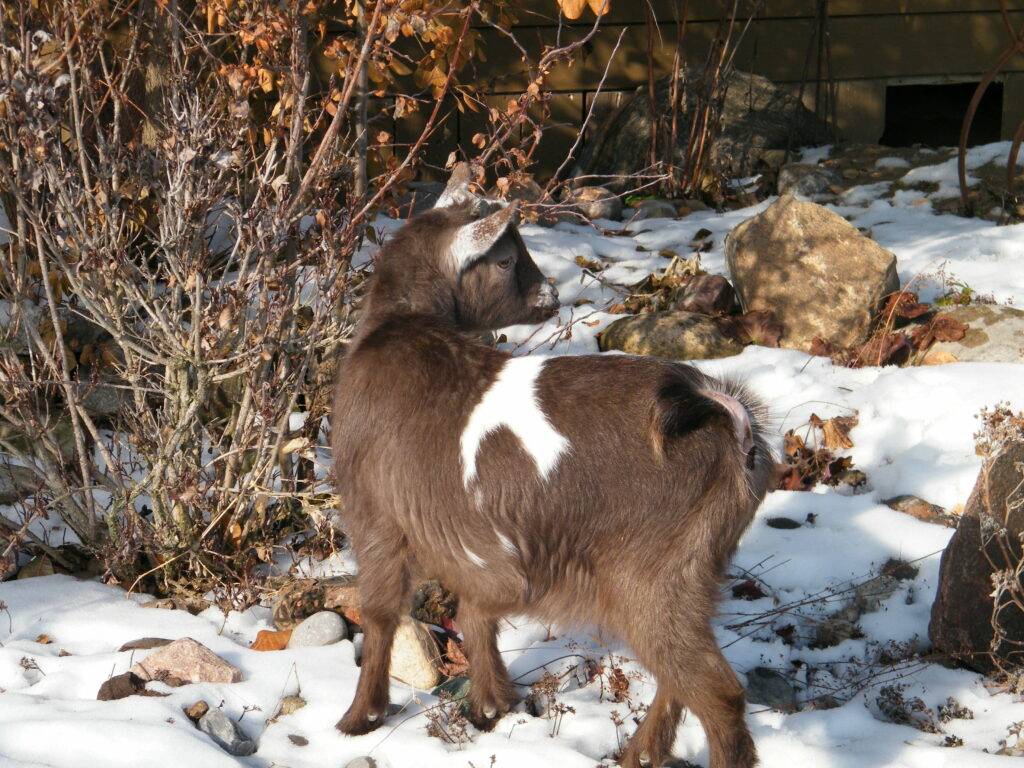 As it turned out, Sam and Bailey had been sold, not as pets or for any of the other less cheerful purposes, but as yoga goats. Yes, Virginia, yoga goats. And thanks to the goats’ future yogi status, Kira and Andrew’s three children had been playing with them and handling them since birth. The difficulty was that the yoga goat mistress had been diagnosed with medical issues that put her goat yoga plans on the back burner. And therein lay the rub. As some of you may know, boy creatures on farms don’t always have the rosiest outlook. And the real kids handling the goat kids made for a difficult situation. Andrew and Kira seemed to be in a bit of a bind.

You cannot make this stuff up. Goat yoga, beautiful tow-headed children, calendar goats, homesteading, compassionate and committed parents and Caberneigh. I am sure everyone knows what happened next. 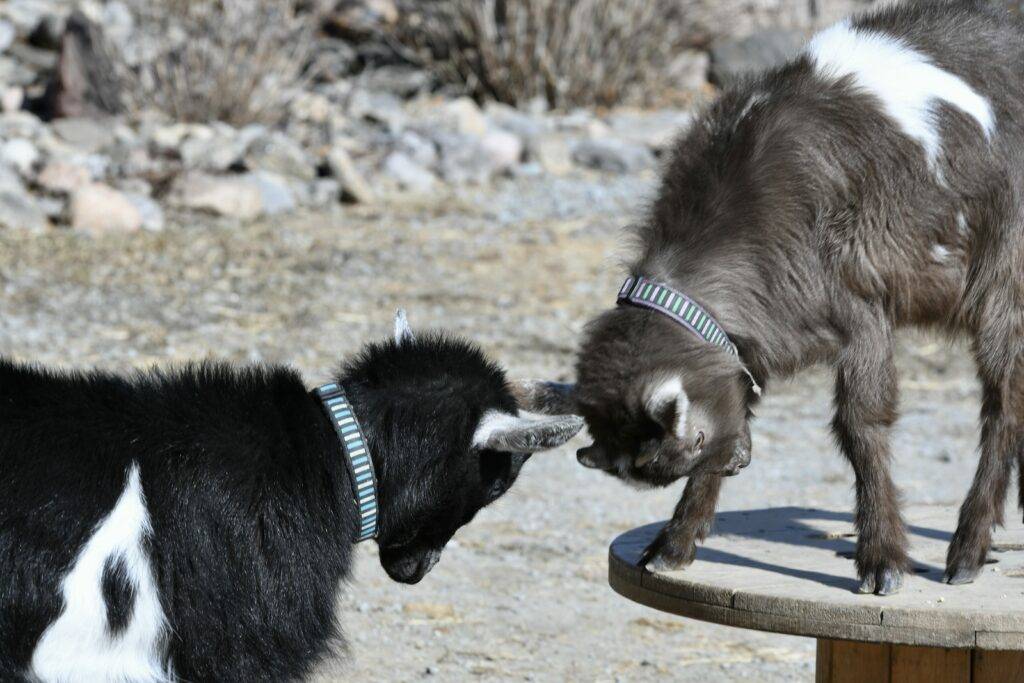 I did try to avoid getting in that goat pen, but like something caught in the tractor beam of the starship Enterprise, in I went. Cue the music. Interac e-Transfer? Done. Chickens in cat carriers? Done. Me in the back seat with two (because you can’t just have one) baby goats? Done. The Clampetts turned south and headed for home, once we navigated out of the GPS dead zone.

Navigation and slightly distressed baby goats is not a favourable combo. We also had to find a gas station, one selling diesel, of course. If you didn’t know, baby goats tend to pee and poop at rather alarming rates. Fortunately, the back seat of our truck has seen its fair share of indignities, so it is well kitted out for all sorts of messes. By the time we found the gas station, I was able to fill the garbage can with paper towel, chewed bits of clothing and tiny balls of goat poop. The Ram truck was akin to a clown car, with all the clucking, bleating and accompanying chihuahua commentary. Passersby were surreptitiously taking photos from their cars. I managed to get the right number of everything out and back into the truck again. Needless to say, no more stops were on the list.

Everyone settled down after a while. Both goats managed to squeeze onto my lap, I had a chihuahua on the back of my neck, and the chickens went to sleep. PJ, glancing in the rear-view mirror for most of the three-hour tour, mostly laughed. 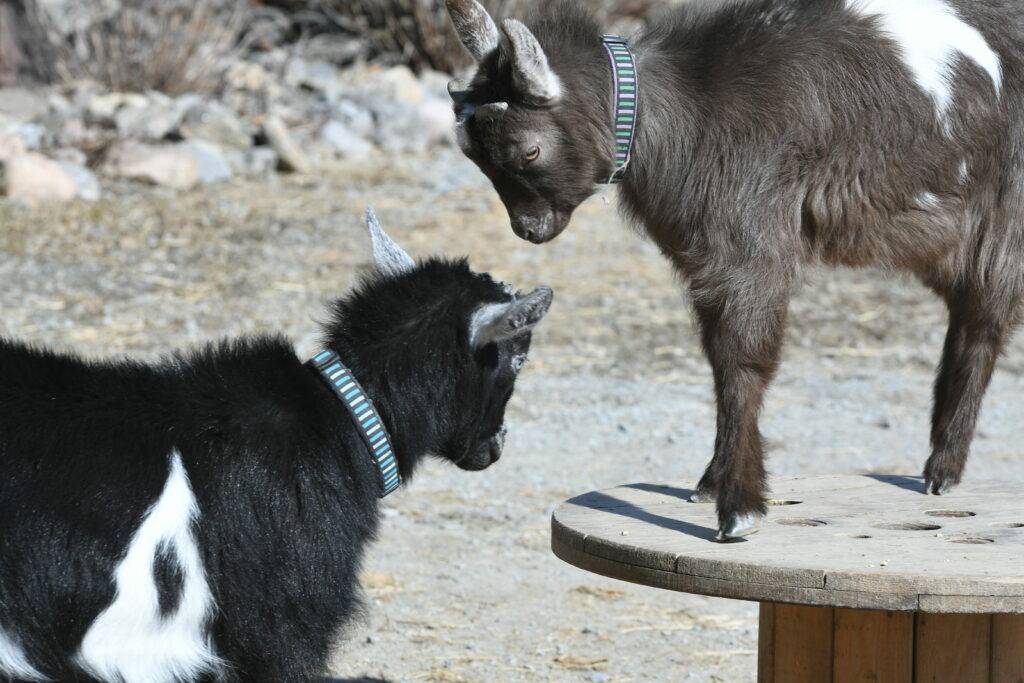 Fast-forward a few months for a quick snapshot. Happily, the goat yoga mistress has recovered from her illness. In spite of being unprepared, Caberneigh and baby goats fit together perfectly. Sam and Bailey started out in a spare chicken coop when not following along, “helping.” A few ramps and wooden spools completed the playpen. The gardens actually survived the onslaught. Hostas create great obstacle courses. Walks around the property are enormously entertaining when undertaken with leaping, head-butting goats.

As summer morphed into fall, the goats deserved cozier digs and moved in with the horses and Olive in the big barn. That was a solid week of excitement—snorting, rearing, tail-flagging, eye-popping excitement. The horses could barely contain themselves. Baby goats have no sympathy for skittish flight animals like horses, and the barn aisles and hay bales are perfect launching pads for leaping, bucking and butting like big rams when the goats aren’t instigating dog chases. 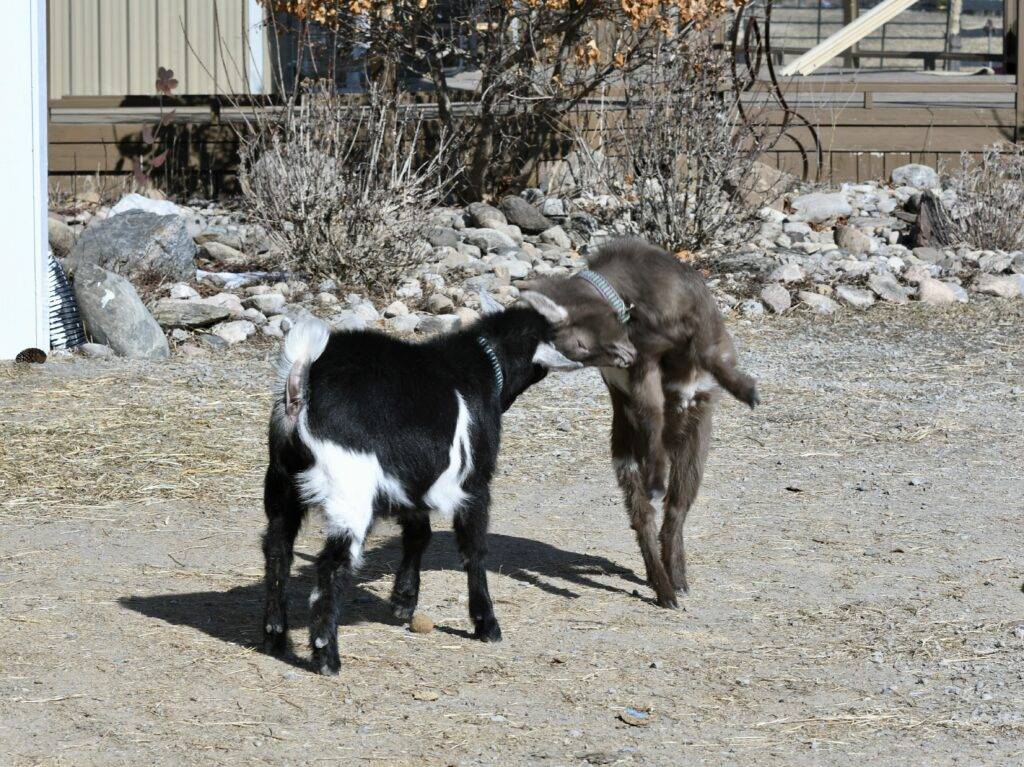 Sam and Bailey are fearless and funny, bold and affectionate, interested in everything and offended at being left out of anything. They are the anti-depressants of the animal world, and we were right: Caberneigh Farm was not complete without itty-bitty goats.

Nicole is one of the caretakers of Caberneigh Farm. The farm is a 50 acre hobby farm between Uxbridge and Port Perry. We have many animals- Horses, dogs, cats and recently Olive the Pig. We feel lucky to occupy this space and we invite family and friends to enjoy often. cheers!