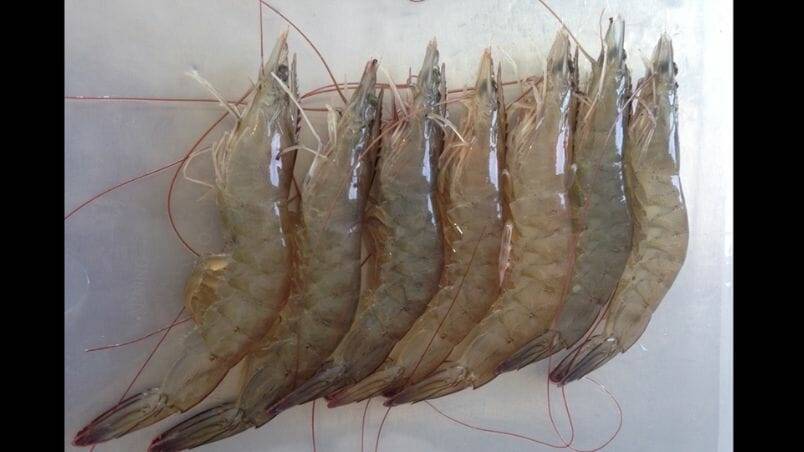 Shrimp farms don’t exactly come to mind when we think of Ontario growers. Yet in Campbellford, Ontario, just two and a half hours from Toronto, shrimp are being raised for consumption, and by hog farmers, no less. How did this come to be? “Basically, we were hog farmers before, but prices were down a long […]
By Catalina Margulis

Shrimp farms don’t exactly come to mind when we think of Ontario growers. Yet in Campbellford, Ontario, just two and a half hours from Toronto, shrimp are being raised for consumption, and by hog farmers, no less. How did this come to be? 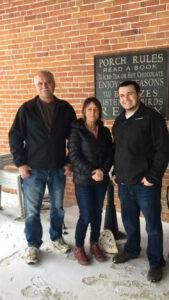 “Basically, we were hog farmers before, but prices were down a long time and it just wasn’t worth doing anymore,” explains First Ontario Shrimp co-owner Brad Cocchio. “We had empty barns that weren’t that old, and my dad was on the internet, looking at alternative uses, and found some guys in the States, in Indiana and Maryland, that were growing shrimp in old chicken barns, and thought we could do that with our hog barns. So he went to Maryland and Indiana to see them, and took notes, and we adapted it to our barn.”

Whereas the American shrimp farmers were using round PVC frame pools with liners, Cocchio says that wouldn’t work in their barn because of its rectangular shape. Instead, they poured concrete tanks and lined them with pond liners, which made better use of the space available, he explains.

Although the barn itself is small (just 61 by 12 metres/200 by 40 feet—“It’s amazing how much protein we can make out of that area,” says Cocchio) and very well insulated—the tanks are located below ground level, and there is cellulose in the ceiling and insulation in the walls above ground—keeping the business running through the Canadian winter can run up the bills for the farm, which operates year-round. “The water is 29°C and is heated with hot-water tanks,” says Cocchio. “In winter, it does take propane to keep it warm, but in the summertime it’s not bad because it is insulated so well. In winter, it’s not cheap to keep it warm in there.”

“The price for our shrimp does reflect what goes into making them. The PL, the post-larvae, that we bring in from the States [a pathogen-free hatchery in Florida] has to be brought in, the feed has to be brought in from Pennsylvania, the heat—it all has to be added to the price of the product when it’s done,” says Cocchio.

A price comparison is hard to gauge, though, since First Ontario’s shrimp—of the Pacific white shrimp variety—are sold whole, with the head on. “It’s not like how at Costco you might see a bag of frozen shrimp tails. With us, you’re getting the whole shrimp, with the head and everything. It’s whole, just not alive,” says Cocchio.

But for those who can appreciate great taste, it’s a no-brainer. 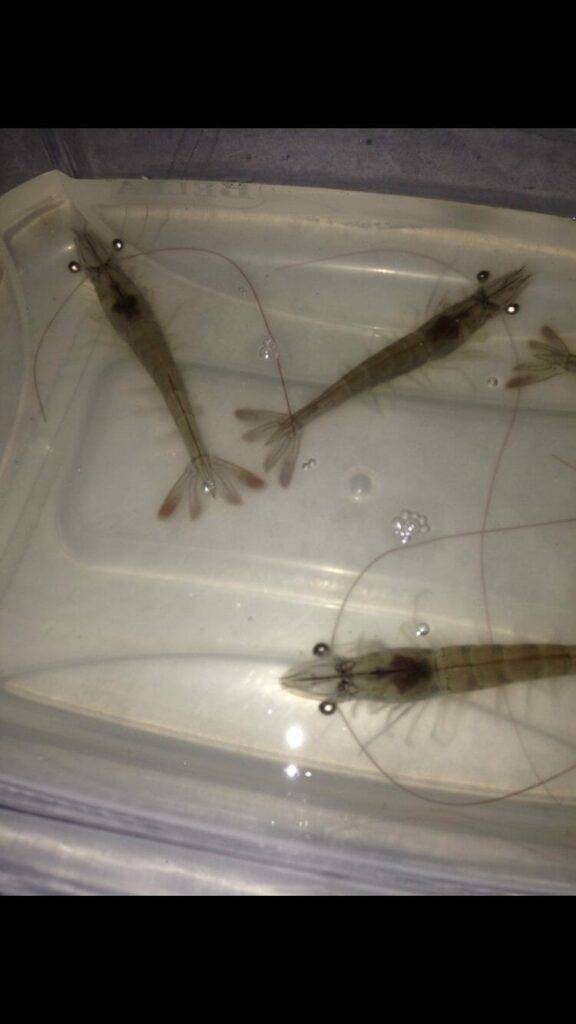 “It’s two totally different things,” says Cocchio, comparing his shrimp to the kind that line most grocery store shelves, which he says hail mostly from Asia and are farmed mostly outdoors in ponds and pens, possibly from unregulated sources, at that. “Our shrimp tend to be extremely sweet, and firmer as well. I think it’s because when shrimp is frozen and liquid in the flesh freezes, it shatters the meat. It’s frozen steak versus fresh steak,” he says.

“You’re not going to find shrimp that’s as fresh as you can find here. If someone was to get shrimp from our farm, it would be out of the water for maybe two hours, not two weeks or two days. Freshness is a big thing. And you’re getting the whole shrimp. We’ve had a lot of people come who like to make things like chowders or fish stock out of boiling the heads and shells. On the sustainability side of things, we’re not harming the environment at all. And we’re grown here in Ontario. It’s 100 percent safe,” says Cocchio.

First Ontario’s shrimp are harvested the day of delivery or pickup, and are sold whole, fresh. “We bring the shrimp out of the tank and put them in ice water, and that kills them. We package them in a bag, and away they go,” Cocchio says. 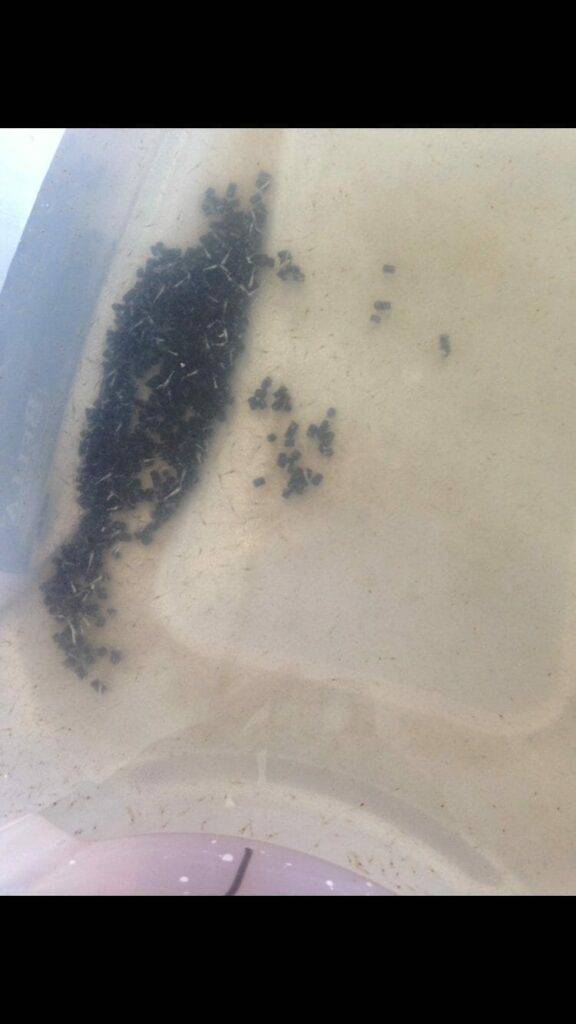 The Ocean Wise–certified producer claims to have no environmental footprint. “We really have no impact on the ocean itself,” explains Cocchio. “Nothing leaves the barn. The water that’s in the barn right now is the water we started with three years ago. The only water that we lose is due to evaporation. As the water gets older in the barn, it actually gets better because the bacteria in the water gets better established. That deals with excess feed, it deals with shrimp waste, and then in turn the fish eat it. It’s a closed loop.”

While more and more barn-based shrimp farms are popping up in the States, “It’s still relatively new and everybody is still learning how to be perfect [at] it. We’re still learning every day, and it will be like that for a long time,” says Cocchio. “It’s not like growing a pig or cow, where you can look out in the field or in the barn and see that cow doesn’t look very good or that pig doesn’t look right. The shrimp are in the tank, and it’s four feet of water and the shrimp are on the bottom, and the water is murky. If you have dead shrimp that are floating, you’re four days behind. It’s a really steep learning curve.”

Still, it’s not for the faint of heart or weak of mind. “We were told if you could grow a pig, you could grow shrimp, and that’s nowhere near true. We test for nine parameters in each tank daily. These parameters can change in a couple of hours,” says Cocchio, referring to toxins like ammonia, phosphates, nitrate and nitrite, as well as things like salinity, temperature and alkalinity, they need to test for.

The company began growing shrimp in October 2014, and took about three months to reach its first harvest. Winning over the country, however, didn’t take long.

“We had [a] fish specialist and restaurant owner from Toronto find us first—John Bill [the late owner of Honest Weight passed away in January]. Once he knew about us, everyone knew about us. Our shrimp are served in Toronto, Ottawa, Kingston and Prince Edward County,” Cocchio says.

Right now, restaurant and fish counters have been making up the bulk of the farm’s clientele, though some on-farm sales are done on select harvest days. “The feedback has been 100 percent positive,” says Cocchio.

“It’s interesting to see things like this shrimp farm popping up. It’s great,” says Langdon Hall’s acclaimed chef Jason Bangerter. “Normally, I would pull from Vancouver or an ocean or coastal line. But to have something growing here that is delicious and employing people and sustainable and preventing the destruction of coastal and ocean waters and helping species thrive and grow, that’s fantastic. I definitely support it.”

“The one thing I’ve found is that chefs like the shrimp with the head on; they like to look at its eyes, so they can tell how fresh it is,” says Cocchio. “If the eyes are big and bright, you know it’s healthy. If the eyes are cloudy and sunken in, it’s not that fresh. We sell whole, so they know it’s super-fresh. Some people just come into the farm and see there is the head on, and they don’t know what to do. I always give them a little demo.”

So far, the company has been a runaway success. “I could sell 10 times what we produce right now, maybe more,” says Cocchio. The barn already produces 130 kg (300 pounds) of fresh shrimp each week.

But as for expansion, they’re taking the slow and steady route. “We have three barns, but we’ve only converted one over for shrimp,” Cocchio says. “We want to get this one 100 percent figured out before we go any further—it’s fairly cost intensive to do the retrofit. We want to make sure we have all ducks in a row before we do that.”

Interested? You can pre-order online and pick up at the farm at 3 p.m. sharp on Thursdays. Shrimp goes for $18 per pound (around 20 shrimp). firstontarioshrimp.com