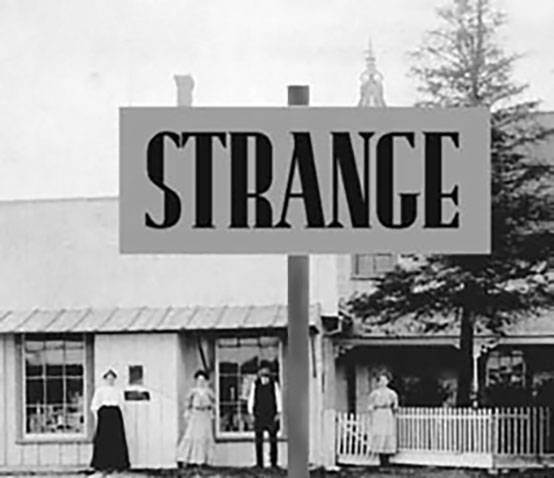 Canada. Ka. Na. Da. Ka-na-da. Say it aloud a few times and the name of our nation starts to sound a bit, well, weird. But Canadians wouldn’t have it any other way. With a glance at the sampling collected here, it’s obvious our forefathers had a sense of humour, if not much grasp of the […]
By The Harrowsmith Team

Canada. Ka. Na. Da. Ka-na-da. Say it aloud a few times and the name of our nation starts to sound a bit, well, weird. But Canadians wouldn’t have it any other way. With a glance at the sampling collected here, it’s obvious our forefathers had a sense of humour, if not much grasp of the poetic, when they named the country’s towns and villages.

And if you think “Canada” sounds wacky, try wrapping your mind around some other choices that came up at the official birth of our nation, in 1867: Albion, Borealia, Hochelaga (an old name for Montreal), Norland (’cause we’re northern. Duh!), Ursalia (because of all the bears. Double duh!), Victorialand (in praise of the queen) and Cabotia (in honour of explorer John Cabot, who “discovered” us first). Now imagine being referred to as a Cabotian or egad! a Borealian.

So what’s in a name? In Canada, plenty.

With a country as vast as ours, we’ve only barely scratched the surface of unusual place names. So how about your town? Got a weird and wonderful name tip for us? Drop a line to the editorial team.

Where in the World? 248 miles (400 km) northwest of Whitehorse
Population 400
Important Dates Established 1903, incorporated 1984
Claims to Fame The Silver Trail (a scenic highway boasting some of the best views of wilderness and wildlife in the country). Gold- and silver-mining legacy. Record lows of -79.6ºF (-62.2ºC) and record highs of 96ºF (36.1ºC).
What’s in a Name? Named after prospector Alfred S. Mayo. Pass the mayo? Wouldn’t think of it.

Where in the World? In the Fraser Canyon, about 106 miles (190 km) east of Vancouver and 31 miles (50 km) north of Hope, BC, and therein lies the local joke: “Spuzzum is beyond Hope.”
Population A couple dozen, maybe more
Important Dates Tourism exploded during the late 1990s when Sasquatch was sighted in the area.
Claims to Fame A landmark in the early days of the Gold Rush, Spuzzum was also formerly a fur trade depot for the Hudson’s Bay Company. Prior to the construction of the nearby Alexandra Suspension Bridge, ferries crossed the Fraser River here. At one time, both sides of the sign on the Trans Canada Highway read: “You are now leaving Spuzzum.”
What’s in a Name? “Spuzzum” means a reed used in basket weaving to members of the Nlaka’pamux First Nation, who have resided in the area for thousands of years.

Where in the World? An hour southeast of Calgary
Population 1,700
Important Dates Incorporated in 1921
Claims to Fame “Nine in a Line” grain elevators (when wheat was king, Vulcan’s elevators stored 750,00 bushels—the greatest capacity in Canada). Fittingly, Vulcan also has a replica of the Enterprise, a starship navigated by Cap’n Kirk, Spock and the rest of Star Trek’s intergalactic crew. No word of tentacled aliens or phasers set to “stun” but you can get a pair of Spock ears as a memento. Despite Leonard Nimoy’s full endorsement, Vulcan’s campaign to host the world premiere of the latest Star Trek movie was turned down by Paramount, but the studio did fly 300 Vulcan residents to Calgary for the North American opening; after all, Vulcan does not have a movie theatre. Nimoy was quoted as saying the move was “logical.”
What’s in a Name? A Canadian Pacific Railway employee sent to survey the land just happened to be an expert in Roman mythology: Vulcan is the Roman god of fire.

Where in the World? Above the Arctic Circle, in the Kitikmeot Region of western Nunavut. The only settlement on King William Island, 656 miles (1,056 km) northeast of Yellowknife.
Population 1,064
Important Dates In October 1903, polar explorer Roald Amundsen moored here on his first failed attempt to cross the Northwest Passage. The Netsilik Inuit gave him shelter for nearly two years.
Claims to Fame Sea mammals in abundance. Amundsen’s ship never left Gjoa Haven, but he didn’t mind, since he referred to it as “the finest little harbour in the world.”
What’s in a Name? The Inuktitut name for the town is Uqsuqtuuq, meaning lots of blubber, while Amundsen’s ship’s name was Gjoa.

Where in the World? 472 miles (760 km) northeast of Edmonton, on the northern shore of Lake Athabasca near the Northwest Territories border.
Population around 200, though at the height of uranium mining there were almost 5,000 souls.
Important Dates In 1952, the provincial government decided to establish a town to service the uranium mines in the area. It collapsed in 1983 when the mines closed, and again in 2003 when the local hospital closed and services were relocated to Stony River.
Claims to Fame Local celebrities include Gina Kingsbury, a member of the 2006 gold-medal-winning women’s hockey team, author Morningstar Mercredi and playwright James O’Reilly. Without any road access, the town also has a certified airport with a treated gravel runway.
What’s in a Name? Uranium is a relatively rare natural resource, used mainly as fuel for nuclear power plants. Radioactive? Yes. But it was also Canada’s number-one export in the 1950s. Despite the collapse, we’re still the world’s top uranium producer (at press time, anyway).

Where in the World? About 248 miles (400 km) northwest of Winnipeg and 32 miles (58 km) north of Dauphin, in the Parkland Region.
Population 628
Important Dates Fort built in late 1700s; incorporated in 1915 Claims to Fame Aside from having a name that sounds like a pesky rash, Winnipegosis is home to the original Fort Dauphin constructed by descendants of the French explorer LaVerendrye.
What’s in a Name? Derived from a Cree word meaning “little muddy water,” referring to the Mossey River, an important fur trade route.

Where in the World? King Township, just north of metropolitan Toronto
Population Less than 100
Important Dates Founded as Williams town in 1841 with the opening of a general store
Claims to Fame The 1.15-square-mile (3-sq.-km) Strange Till Plain makes up the flat ground in the area. It sits between two wedges of the rolling Oak Ridges Moraine, a landform which contains the headwaters of nearly 70 river systems and is one of the last green corridors in southern Ontario.
What’s in a Name? After the town’s first William Strange, M.P., took it upon himself to open another in 1880. Because of his commitments to the town, Williams town turned Strange soon after.

Where in the World? North of the Arctic Circle, in the Inuvik Region of the NWT. A natural harbour in Kugmallit Bay on the Arctic Ocean. Inaccessible by car except in winter, on a 93-mile (150-
km) ice road from Inuvik.
Population 870, mainly Inuvialuit (i.e. the western Inuit people, descended from the Thule of Russia)
Important Dates Turn-of-the-19th-century flu epidemics wiped out most of the original inhabitants. In 1950, the town formerly known as Port Brabant was renamed Tuktoyaktuk as part of a move to change community names to something
more traditional.
Claims to Fame Traditionally a beluga whale and caribou harvesting site; later a base for oil and gas exploration in the Beaufort Sea. Radar domes were installed here during the Cold War as part of the Distant Early Warning (DEW) Line. Site of Molson Ice Beach Party rock concert in 1995. And don’t forget the pingos (earth-covered ice domes), of which 1,350 lie in a national landmark site just miles west.
What’s in a Name? Most refer to it simply as Tuk, but in Inuvialuktun, the full name means “it looks like a caribou.” According to local lore, a woman watched a caribou wade into the water and turn to stone. Today, reefs resembling these petrified caribou are said to be visible at low tide.

Where in the World? On the Saint-Maurice River between Trois-Rivières and Chambord, about 186 miles (300 km) northeast of Montreal.
Population 11,821
Important Dates Incorporated 1911
Claims to Fame The 10.5-foot (35-m) waterfall, the Hydro dam and the Smurfit- Stone pulp-n-paper mill. One of the most patriotic places in Quebec, La Tuque is birthplace to the late Felix LeClerc, a staunch separatist. Regardless of his political beliefs, LeClerc remains a beloved actor, writer and folk singer.
What’s in a Name? In the 18th century, a newcomer noticed a large rock formation that resembled a tuque, the perfect garment for keeping your head warm during a Quebec winter.

Where in the World? Just outside of Moncton and Sackville, on the Petitcodiac River.
Population 4,638
Important Dates Memramcouke was listed as part of the Seigneurie de LaVallière way back in 1676. Saint- Thomas de Memramcook parish (1781) was the first in Acadia. A century later, it was the site of the first Acadian National Convention. Finally incorporated as the amalgamated village of Memramcook in 1995.
Claims to Fame Often called the berceau de l’Acadie, or cradle of Acadia. Home of the first francophone and Acadian university of the region, Collège Saint-Joseph, founded by Father Camille Lefebvre who is now immortalized in the Monument Lefebvre National Historic Site, home of the Acadian Odyssey Exhibit.
What’s in a Name? Memramcook means “crooked river” in the language of the Mi’kmaq First Nations. That same “crooked” river sports several aboiteaux or dykes to help stem flooding.

Where in the World? Overlooking the mouth of the Pugwash River where it empties into the Northumberland Strait.
Population 4,454
Important Dates This shipbuilding/logging/salt-mining town was colonized by Loyalists and Scots in late 1700s. The railway arrived in 1890. Pugwash suffered four major fires between then and 1929, when the entire downtown was destroyed. Local steel magnate Cyrus Eaton returned to revitalize the town the same year. In 1957, he hosted the first international conference of scholars, spearheaded by Bertrand Russell and Albert Einstein, which became known as the Pugwash Conferences on Science and World Affairs.
Claims to Fame As the motto says, this town is “world famous for peace.” Many of the world’s most prominent and influential scientists and philosophers came here to state their opposition to nuclear weapons.
What’s in a Name? No, Pugwash is not what you do to clean a lap dog with an upturned nose and flappy jowls. It refers to the Mi’kmaq word “paqweak,” meaning deep water.

Where in the World? In Queens County, 15 minutes from the Confederation Bridge, just north of Victoria, on the Westmoreland River.
Population 353
Important Dates In the early 1800s, the Westmoreland family owned Lot 29, giving their name to both the river and the harbour. The name came in 1842, but the town wasn’t officially incorporated until 1950.
Claims to Fame Formerly, timber and ship building. Today, farming and festivals. Every summer you can take in the PEI Tractor Pull Championships, Crapaud parade, Crapaud Community Concert and Crapaud Exhibition.
What’s in a Name? French settlers named the watercourse “Rivière Crapaud” due to the area’s abundance of amphibians. As you might have guessed, crapaud is French for toad.