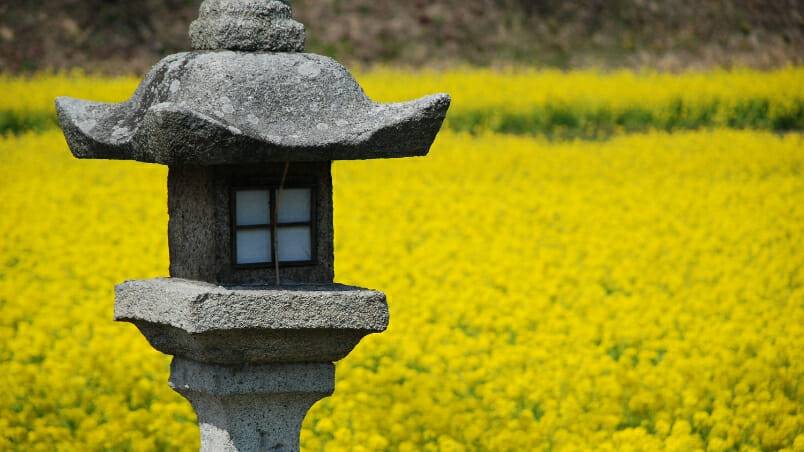 Dispatches from a Japanese Garden – The Land I Farm

The land I farm lies in the mountains of southern Kyoto, a one-hour train ride, and two small mountain ranges east of Osaka. It’s within the boundaries of the Kansai region, an area 27,340 km2, of nearly 23 million inhabitants. To put that into perspective, that is an area about half the size of Nova […]
By Keith Wesley Adams

The land I farm lies in the mountains of southern Kyoto, a one-hour train ride, and two small mountain ranges east of Osaka. It’s within the boundaries of the Kansai region, an area 27,340 km2, of nearly 23 million inhabitants. To put that into perspective, that is an area about half the size of Nova Scotia, with a population equal to Australia’s. Most of the inhabitants live in the four cities of Kyoto, Nara, Osaka, and Kobe – an area about 3,900 Km2, equal to the area of greater Montreal. 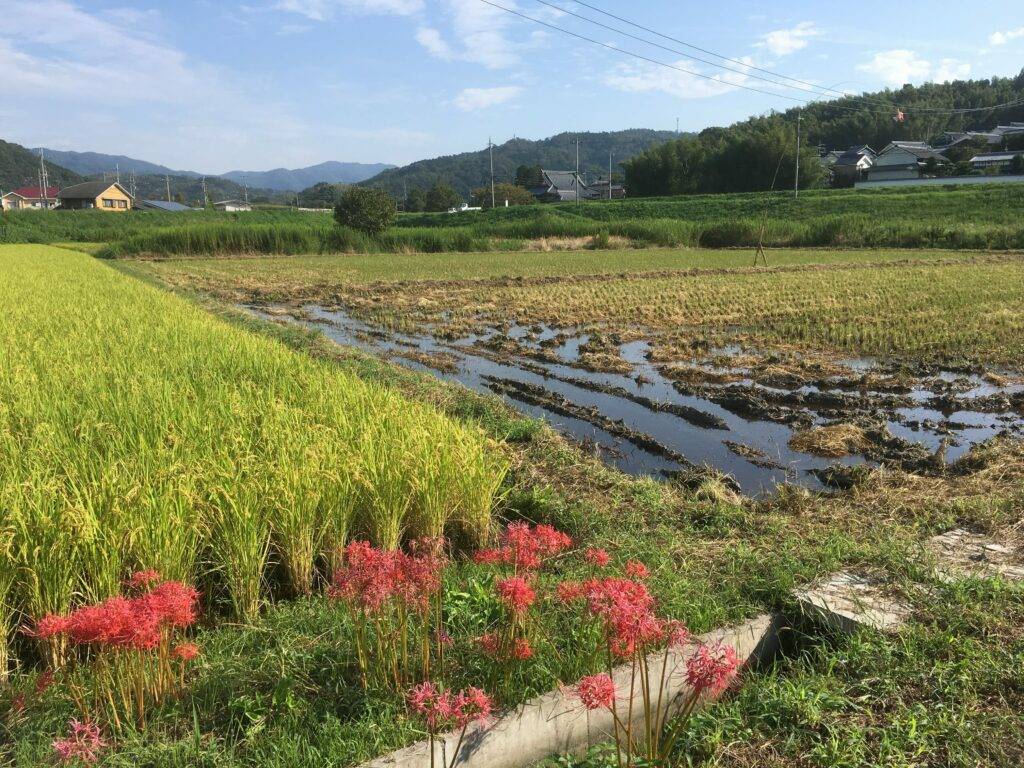 The valley view from near my house. Rice fields around Japan are often marked with these red flowers, Higanbana, known as Amaryllis, or Red Spider Lilies in English. Their blooming also mark the beginning of fall.

Every day, I witness an endless parade of egrets, great blue herons, hawks, ducks, crows, magpies, cranes, swallows, sparrows, and countless other birds. A 10-minute walk into the cedar- and bamboo-covered mountains, may bring me into contact with monkeys, deer, wild boar, badgers, weasels, ferrets, foxes, and pheasants. Some years the boar are so bold they cross the small river and wreak havoc in my garden, requiring me to put up nets around my garden plots. And thankfully, I can easily surround my plots with nets because together they make up only about 1/10th of an acre. 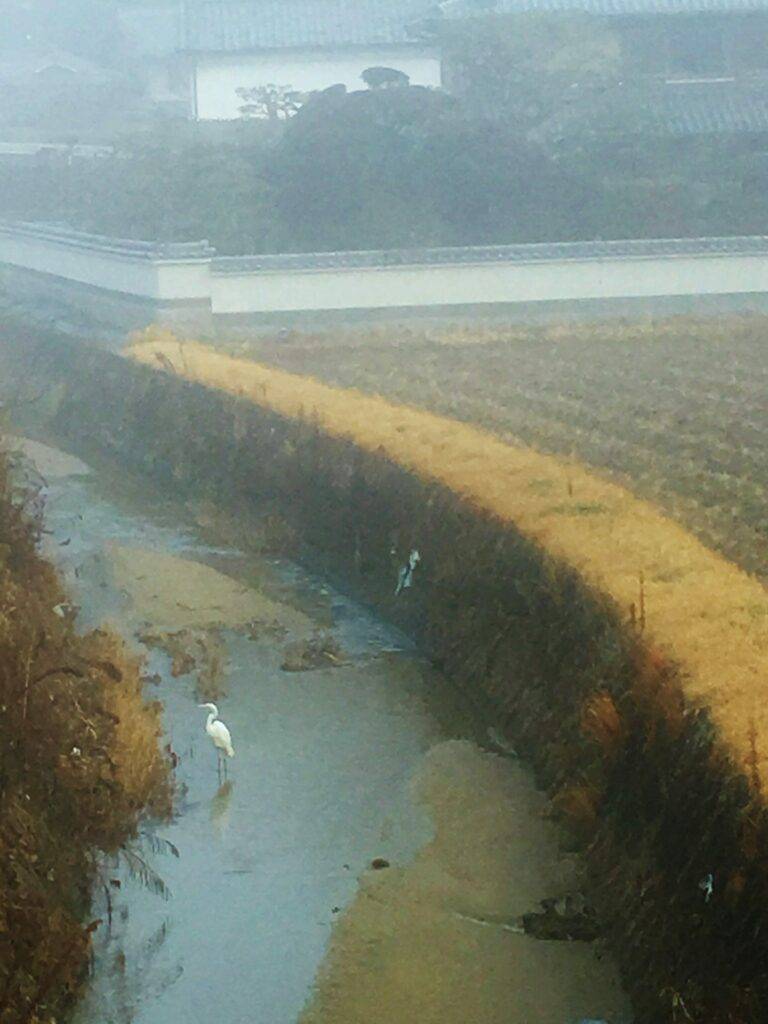 On a misty morning, a great egret wades through the Shinkawa, a small river, running beside a Samurai house. The river is bounded by banks and walls, like most rivers in Japan, to avoid flooding. I have seen it overflow into the fields many times. The egret hunts for the little lobster-like Crayfish.

Japan measures its land in tsubos, an area about 3.3m square; 100 tsubo is a common garden size, that’s .08 of an acre, a fraction of the average Canadian’s backyard. Yet from this tiny plot I grow all the potatoes, sweet potatoes, onions, leeks, garlic, and peanuts my small family needs for the year. In addition, we enjoy a constant variety of seasonal vegetables. 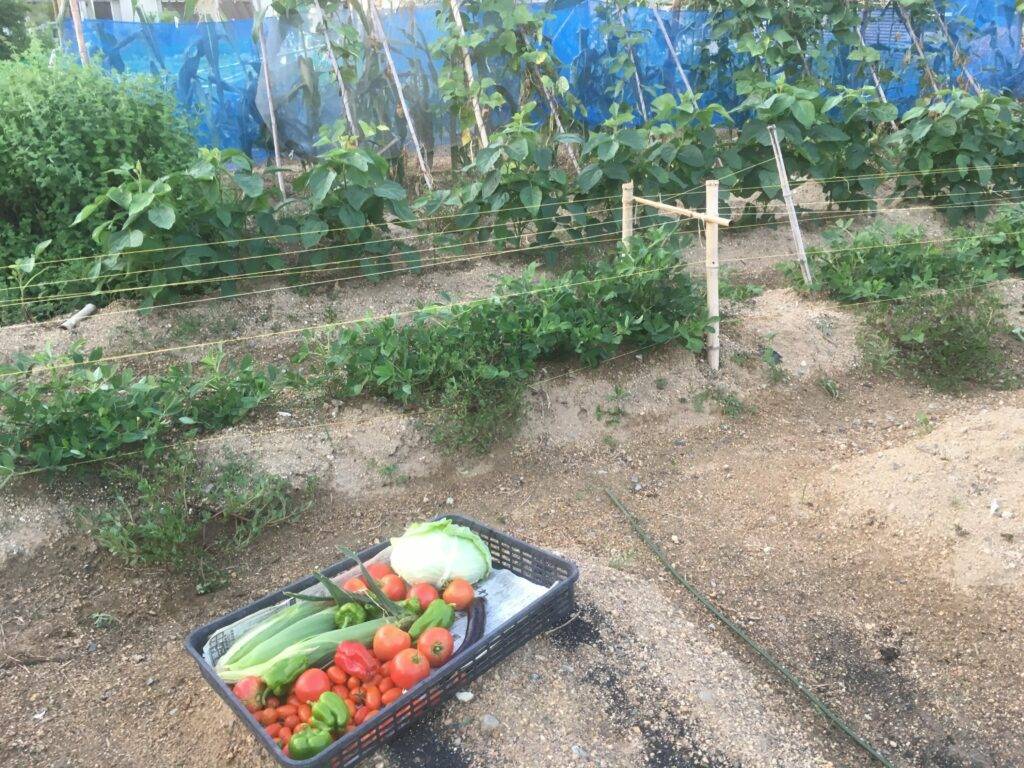 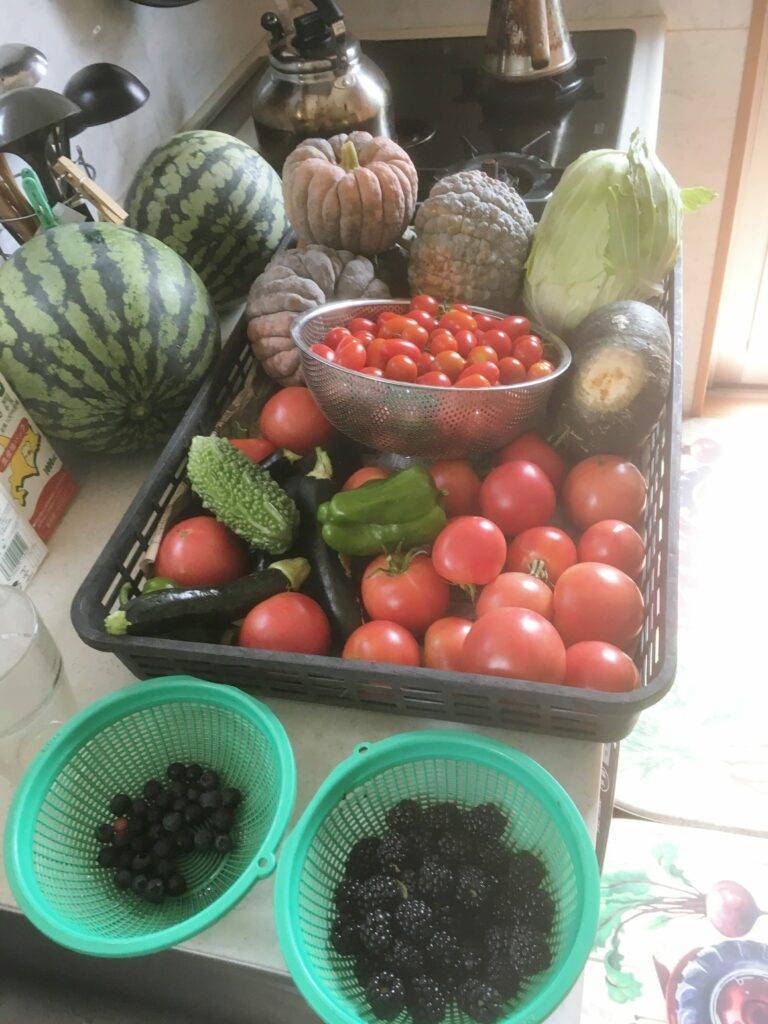 After the Second World War, persimmon trees were planted extensively, and can be found everywhere, their bounteous bright orange fruit contrasting with the blue autumn skies, often rotting on the branch, there for the picking. Likewise carefully tended figs or forgotten pomegranate trees are often planted between fields, the latter left for the birds, or the local residents.

I usually have an excess of vegetables which I give away to neighbors and friends; as well, I host a sweet potato harvest party in which some of my students from the three universities where I teach come to help with the harvest, each taking home a bag of the sweet orange tubers.

My garden dispels the myth that small farms are insufficient to feed the world’s population. Two other myths my garden dispels: a daunting amount of work, and the requisite green thumb. I, who in Canada could not even grow a dandelion, manage all this in an average of 10 hours a week. 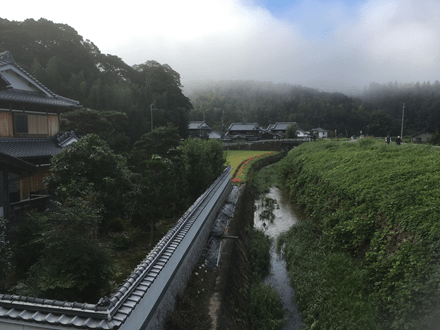 Furthermore, the practice is sustainable. Here I have found not only good land – the soil is rich and the agricultural tradition bountiful – but also good people; a community of farmers, elderly people with knowledge who are happy to share it, and pass it on. I get the most help from Umoto-san, who at 72 is called wakamono – “the young one” – by the 90- year-old landowner, whose fields once covered so much of the town, it was said “you cannot walk through the valley without stepping on his land.” Fascinatingly, he’s one of the few surviving members of the Yagyu Samurai clan that invented the two-sword fighting method. He still rides his small Honda motor bike every day to work in his fields – now scattered amongst the encroaching suburb – bearing every vegetable, flower and fruit the region can grow. With me farming the land he cannot, he doesn’t have to pay tax on it. All I pay him in “tribute” is a gift of a small ham, teas, and biscuits every Shogatsu, or New Year’s, when my family visits his house, a veritable museum of polished wood and antiques. 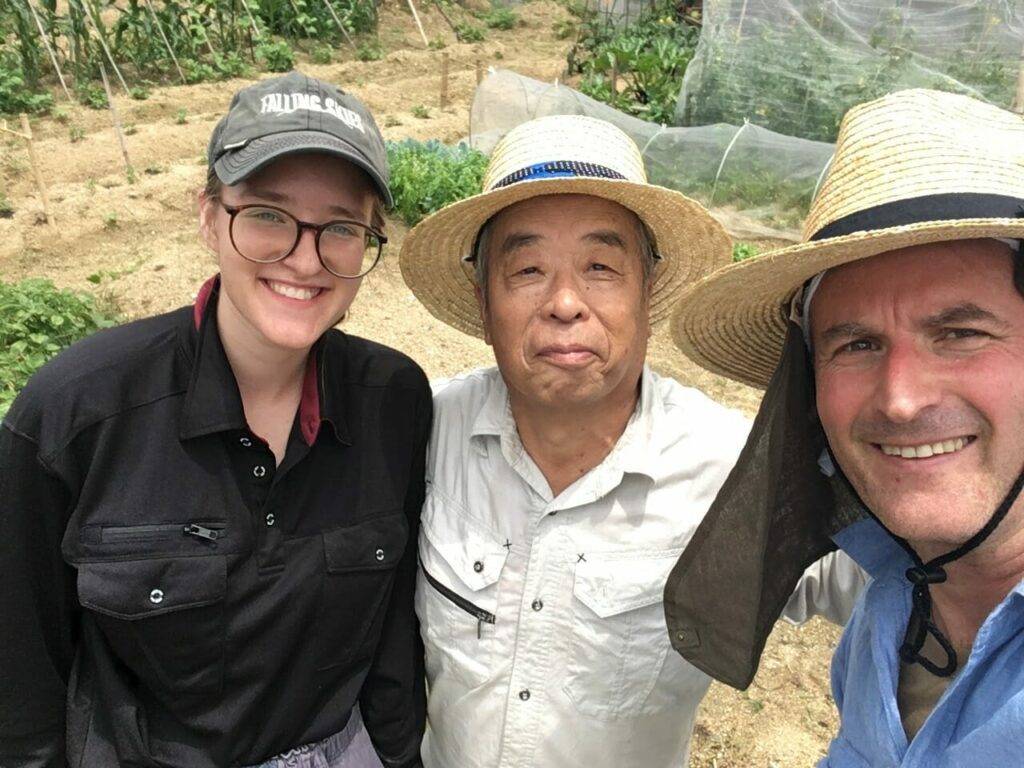 This valley – once the location of the ancient capital of Japan from A.D. 740 to A.D. 774 – has been constantly farmed for at least 1,300 years. On a flood plain, the Kizu River must have re-silted the valley many times before the great dykes were built in the 1960s.  Kizu, 木津 literally means Tree Ford. The steep and jagged mountainsides are evidence of previous clear cuts and erosion. But in the Edo period, the powerful shogunate established strict forestry laws that protected the mountains, ensuring both clean water and fertile valleys. Dozens of farming manuals spread by the shogunate ensured people kept the soil in good health. Any environmentalist knows the term micro-climate, here we may talk of micro soils: the rice fields are heavy and clayish, the vegetable plots tend to be sandy. The older farmers compost all their crops directly in the land, and use leaf mulch, too. Night soil (human excrement), was used well into the 1960s, but the younger farmers – those in their 70s – tend to use more store-bought fertilizers. Some are komakai, extremely fussy, sifting by hand every scoop of soil until they are left with the finest rock-free, black, enriched soil. Others, a new generation, are lazier, relying on chemical fertilizers.

My land was not too healthy when I first got it. I once weeded the entire plot without seeing one worm. But by following the older famers, using constant direct composting, with kitchen scraps, weeded plants, rotting leaves, as well as lime, ash from my wood stove, and bought potash and manures, I have brought it back to life.

Before I farmed in Japan, I always felt I was a foreigner. But I have been welcomed into this community, and everywhere I walk in town people wave to me or stop and talk.    Many Japanese tourists pass through the town, decked out in their Patagonia and Mount Bell hiking gear, visiting the local shrines and historical sites. One day, while weeding, I heard a large group walking up the cherry tree-lined street next to my garden, and one said, “Aa Gaijin Da!” – Oh look, it’s a foreigner! – at that moment I thought, ‘no, I’m the local and you are the foreigners.’ Farming connects me to the land. 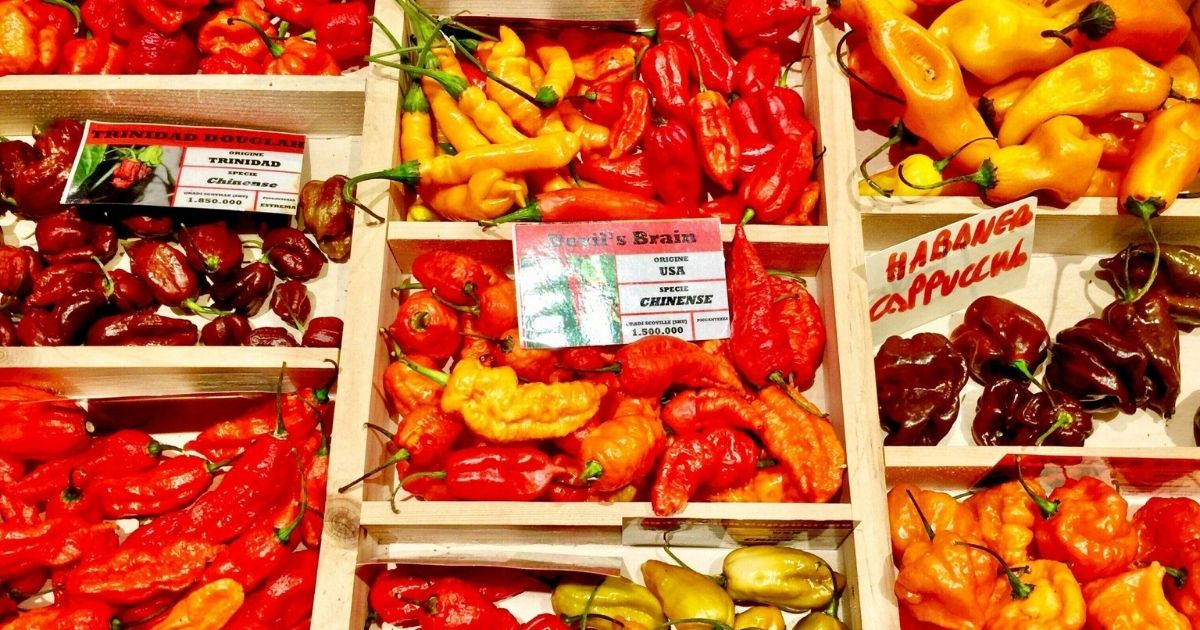 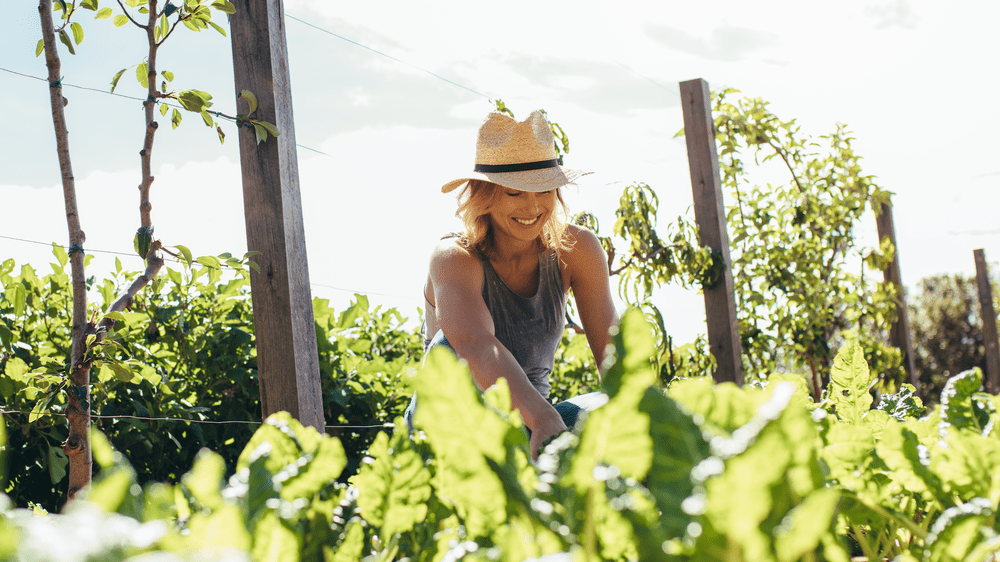 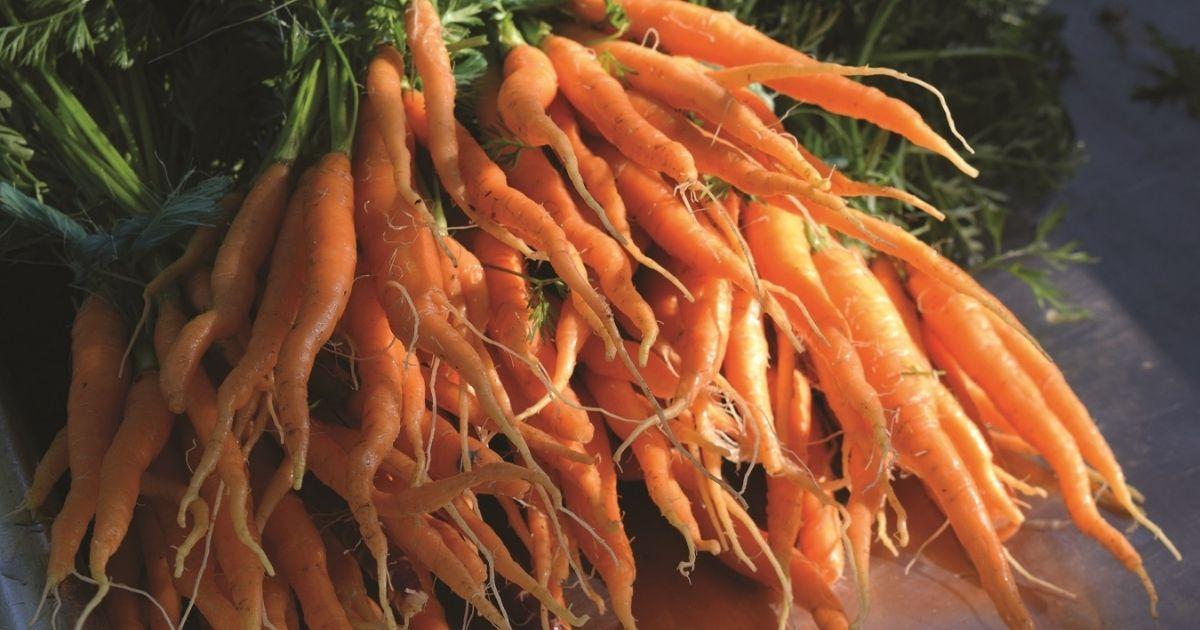 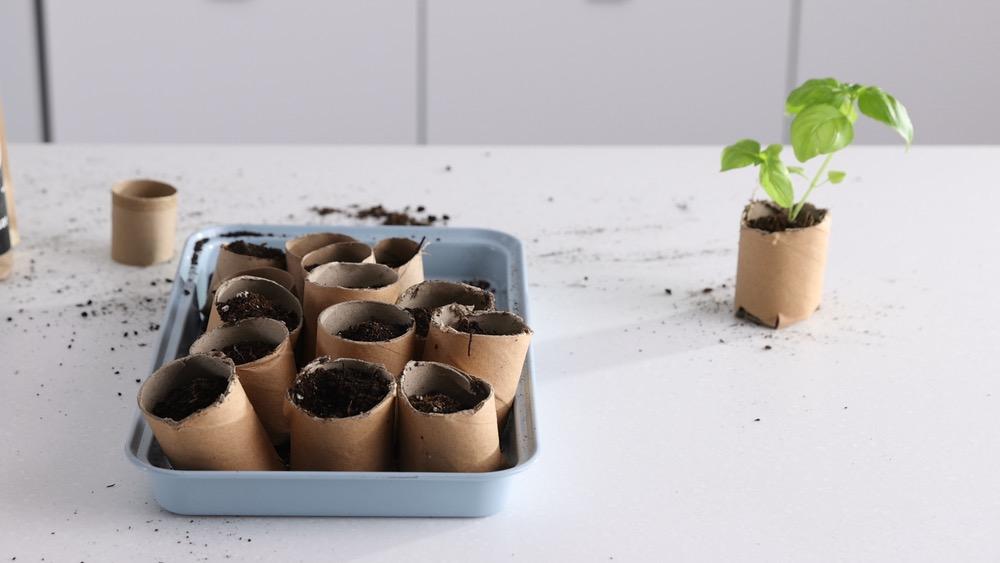 Get your seeds started now by creating these zero-waste, biodegradable pots