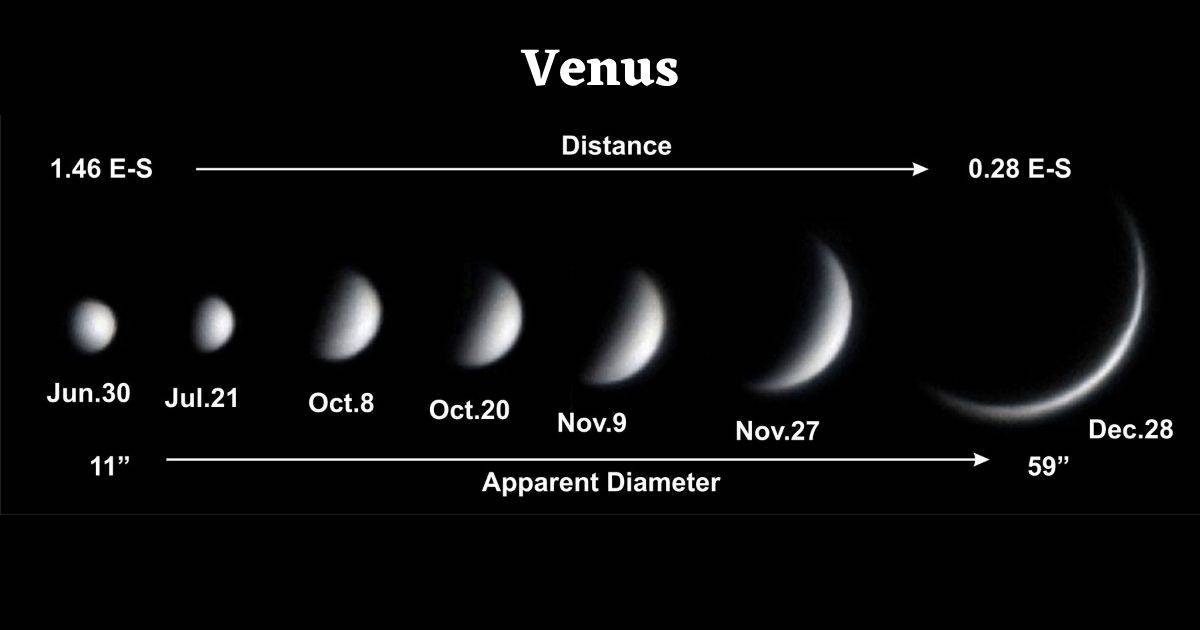 You have probably been watching a very bright object in the southwest after sunset. It has been moving slowly along the horizon from the west at the beginning of the summer into the southwest – week by week.

It is so bright that when the air in our atmosphere is turbulent its light can be split into flashing colours that can be seen by our daytime colour vision.

As you can tell from the title of this vignette, this is the planet Venus. Up to now with binoculars, you may only have seen it as a brilliant star. But in the next few of months this will change. It will continue to move southward (left), but it will grow brighter. And in binoculars, it will appear bigger and less round.

Its prominence is due to its very reflective atmosphere. It reflects about 70% of the sunlight that hits it, which is1.5-times as reflective as Earth. And, its peculiar movement is due to its orbit, which is smaller than ours so it moves faster around the Sun – overtaking us every 1.6 years.

Throughout 2021 it has been moving “towards the left” – orbiting from behind the Sun and will soon catch up with the Earth, which will occur on the morning of January 8 next year. After which it will become the “morning star” and will head off along its orbit back to the far side of the Sun.

it has been approaching us during 2021, its diameter has grown from only 10 arc seconds in March and will end the year at over 60 arc seconds – about 1/30 the apparent diameter of our Moon.

At the beginning of November, Venus will be about 100-million kilometers from us, and will appear 25 arc seconds across. This is about the limit for us to see shapes with binoculars, but continue to watch. Each week you will notice it grow in size, change shape and brighten. Leave yourself a note for the end of this year when its shape will grow into a thin crescent. It will then appear like a tiny but brilliant “1½ day-old Moon” low in the southwest about 30 minutes after sunset (about 5 pm).

Also at the end of this year Mercury will close in along our line of sight to Venus. You will see Mercury about a binocular-field over to the left of Venus, and for additional interest look for Saturn and Jupiter up and to the left. Jupiter, Saturn and Venus nicely delineate the Ecliptic and a line through them “points” towards the Sun.

The solar system is a dynamic place. Over the next few months, watch as Venus sinks below the horizon, and then as Jupiter and Saturn move into the west – also becoming lost in the light of sunset early next year.