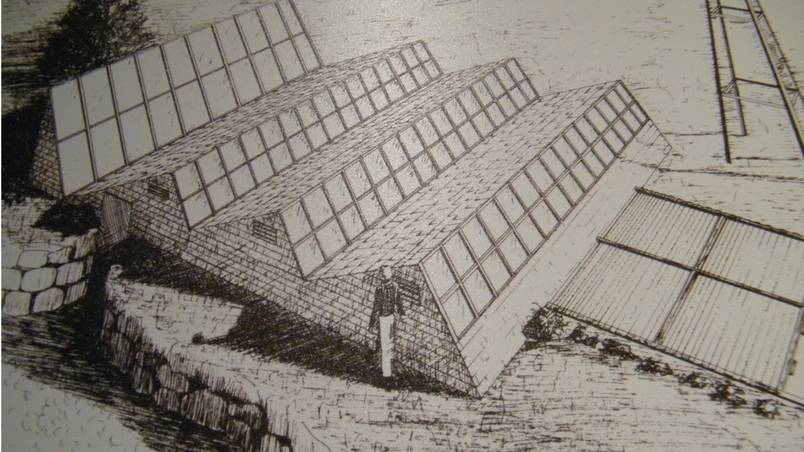 It’s often what you accidentally stumble upon that ends up being the highlight of a vacation. Even the most rigidly researched trip might overlook a pop-up selling duck tacos, a live painting competition or a one-time cask night at a microbrewery. Whenever I land in a “new” place (even if I’ve already been there […]
By Jules Torti

It’s often what you accidentally stumble upon that ends up being the highlight of a vacation. Even the most rigidly researched trip might overlook a pop-up selling duck tacos, a live painting competition or a one-time cask night at a microbrewery. Whenever I land in a “new” place (even if I’ve already been there a dozen times, which is the case with Charlottetown), I make a beeline for the free local rags. The Buzz is Charlottetown’s print hotbed of live music, galleries, matinees and other one-offs worthy of a drop-in. It’s like having a coffee with an Islander: you get the skinny on where you should be seen, the intel on what you can’t miss eating, and the scoop on shows that can whisk in and out of cities unnoticed.

At the Confederation Centre Art Gallery in Charlottetown, visitors can explore the story of the mighty Ark at a new exhibition that runs until April 30, 2017. Living Lightly on the Earth: Building an Ark for Prince Edward Island, 1974–76 is an “architectural vision of life led in collaboration with nature,” according to the gallery’s website.
Built by Solsearch Architects and the New Alchemy Institute in 1976, the 2,000-square-foot Ark bioshelter married sun, wind, biology and architecture for the benefit of humanity. The New Alchemy Institute was founded on a 12-acre former dairy farm on Cape Cod. In the fall of 1970, the New Alchemist’s bulletin clarified the institute’s mission: “Our programs are geared to produce not riches, but rich and stable lives.”
Forty years later, the public can enter the philosophical framework and intention of the bioshelter’s founders. Exhibit curator Steven Mannell is well versed in sustainability, both then and now. Mannell is the director of the College of Sustainability at Dalhousie University in Halifax.
The 1976 experiment was innovative in its experimentation. Remember the Biosphere in Oracle, Arizona? An eight-person crew signed on to live in the climate-controlled environment for two years, from 1991 to 1993. More Survivor than homesteader, the biosphere team relied on an agricultural system that produced 83 percent of their total diet. They grew bananas, papayas, sweet potatoes, beets, peanuts, rice, wheat and cow pea beans. The five biome areas included mangrove wetlands, a rainforest, a savannah, a desert, an 850-square-foot ocean with a coral reef, and a human habitat.
The closed-system experiment was resurrected in 1994 for six months, but both attempts resulted in many animal and plant species die-offs, low amounts of food and oxygen, and excessive squabbling among the crew.
The 3.14-acre Oracle site has been owned by the University of Arizona since 2011. The “vivarium” remains the largest closed system ever created. For those fascinated by such seemingly space-age concepts, the 1976 Ark and 1991 Biosphere provide a neat parallel across the decades. Both projects were ambitious in their attempts to facilitate self-sufficiency. Gallery director Kevin Rice told the Guardian that the “exhibition presents a timely opportunity for Islanders to connect with an optimistic movement in our history and an important discussion of sustainability—which remains very relevant today.”
The Ark exhibition is a concentrated look at the genesis and conception of the bioshelter. There are intricate architectural models, blueprints, vintage photos and text to pore over. For those who want to take it to the next level (and home), Mannell has written a companion book (which shares the same title as the exhibition), published by Dalhousie Architectural Press. The 96-pager is available via Amazon and ABC Art Books Canada. For those who love stacking cool thinker books on their coffee table, this is it.

For project architects David Bergmark and Ole Hammarlund, a new video explores the building of the Ark. For them, “it wasn’t the Ark project itself, it was the dialogue the Ark continues to inspire in our lives and work,” says Bergmark. 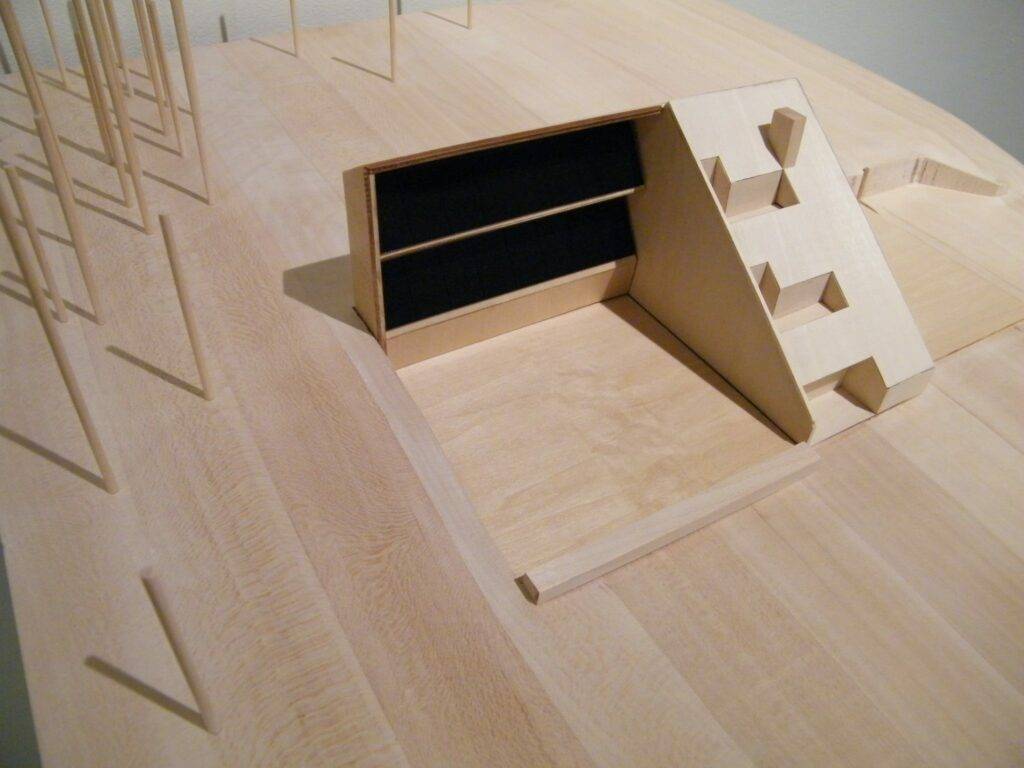 The dialogue hasn’t changed in 40 years. The buzzwords are the same. How do we build homes that provide autonomous life support for families? How can we be self-sufficient or be part of a community sharing the same mindset?
In the ’70s, the biggest force behind self-sufficiency was described as “counterculture settlements.” The Ark in Spry Point, King’s County, was generating interest across the country, not just in its usual rural surrounds. On the Ark’s opening day, September 20, 1976, Prime Minister Pierre Trudeau, Premier Alex Campbell and Whole Earth Catalogcompiler Stewart Brand were all in attendance.
The solar-heated, wind-powered greenhouse and aquaculture complex adapted to a northern climate was a celebration for the back-to-the-island counterculture. The New Alchemy Institute’s motto—“To restore the lands, protect the seas and inform the earth’s stewards”—was timeless and contagious. The fact that Trudeau embraced their ideas too was an affirmation of how living lightly on the earth might inspire change and shake up consumer culture. There was sudden supported encouragement to be involved in self-reliance, instead of just being another passive consumer.
“Saturday farmers” began volunteering their services and strong backs on weekends. A 12-acre farm near Falmouth, Massachusetts, with bicycle-powered windmills, attracted rock-star attention in tandem. The question was obvious: How can we work with nature and not against it?
At the Ark, year-round fruit and vegetable production was the mainstay. Solar ponds were used for aquaculture and tilapia. Heat passively absorbed by the ponds by day was re-radiated at night inside the bioshelter.
The food-raising bioshelter with windmill technology, fish culture and agricultural production was a shining example of an ecosystem that doubled as a microfarm with low operating costs.
The light-trapping courtyard eliminated the need for fossil fuels to heat the bioshelter. The counterculture lifestyle was proving to be money savvy. Living quarters were incorporated with the experimental production unit, all under one roof. Bergmark and Nancy Willis “ran” the Ark, whose residents included adults, children, laymen and scientists.
Where was Harrowsmith when all this was happening? On the scene! As I poked around the gallery, consumed by the photos of Trudeau and early Ark sketches, I smiled to see a February 1981 copy of Harrowsmith. An article by Susan Maloney and Linda Gilkeson was prominently on display, the seam creased open to The Solar Powered Bar—Guavas to Garlic in the Organic Greenhouse. 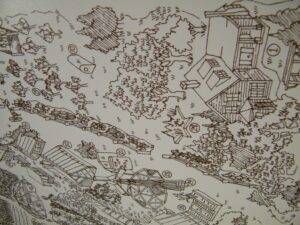 The exhibition, produced by the Confederation Centre Art Gallery with the support of the Canada Council for the Arts and BCHJ Architects, is both inspiring and illuminating. If Charlottetown isn’t on your travel itinerary this spring, you can visit the Ark vicariously at peiark.com. Members of the public are encouraged to share stories, photographs and nostalgia surrounding the P.E.I. Ark. Where were you?
If you are in Charlottetown this spring, don’t be surprised when you find yourself spontaneously sketching your own serviette-sized microfarm with bicycle-powered windmill guava farm after visiting the exhibit. And when you do, make sure you’re doing it right: with a pint of the local elixir, Upstreet Craft Brewing’s strawberry rhubarb witbier, the Rhuby Social.