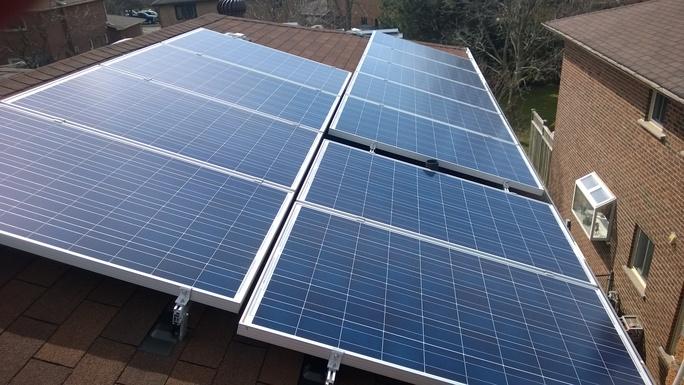 In an effort to live a greener, more environmentally friendly lifestyle, I had solar panels installed on my home’s roof in 2012. This complemented my efforts for my home, as I was already recycling rainwater to water the lawn and garden. Grasshopper Solar handled the installation as part of the Ontario FIT Program. I found […]
By Martin Seto

In an effort to live a greener, more environmentally friendly lifestyle, I had solar panels installed on my home’s roof in 2012. This complemented my efforts for my home, as I was already recycling rainwater to water the lawn and garden.

Grasshopper Solar handled the installation as part of the Ontario FIT Program. I found out about the program from an ad I saw online. The FIT Program is an Ontario government initiative that allows property owners to generate electricity on their rooftops and properties, and then sell it to their local hydro company to pay for the equipment costs. Known as a feed-in tariff, this arrangement offered by the FIT Program offers a guaranteed rate for all the power generated for a 20-year period.

Working with Grasshopper Solar, there were no startup costs, and as the homeowner, I would receive $8,400 over 20 years as my share of the revenue generated by the solar panels. The rest of the money earned would go toward paying for the installation. After 20 years, I would own the panels outright and receive all further revenue generated from that point on.

I applied for the program in 2012. The FIT Program has a fixed quota each year for the amount of power generated that it will buy, so not all homes are approved. Grasshopper Solar came to my house to take solar readings to see if my house would be a good candidate for the program, and I was approved for the project.

Grasshopper Solar installed a $30,000 3 kWh solar system on my roof, including 12 panels (facing south) and an additional meter to see how much power was being created and fed back to the grid. For each kilowatt hour generated, I would be paid 80 cents, which would be used to pay for the equipment. That was in 2012, when solar panels were more expensive to buy; today, with costs being lower for the same equipment, homeowners can expect 30 cents per kWh.

In 2014, solar energy accounted for 27 percent of my home’s needs. Looking at the bigger picture, if a home can power 27 percent of its needs through solar, that would be a substantial savings on the power grid. Considering that residential demand for power in Canada makes up 29 percent, we can potentially move seven percent of total energy consumption to solar. That may enable power grids to phase out coal, which generates 14 percent of power in Canada. (Currently, 58 percent of power is generated by hydro, according to the Canadian Electricity Association.) So the International Energy Agency’s (IEA) goal of generating 16 percent of the world’s electricity through solar by 2050 is not unreasonable.

Not all home rooftops are ideal for solar power, however, according to Natural Resources Canada (NRC). Due to increased cloud coverage, the coastal areas experience a lower yield, while central regions experience a higher yield. Still, the NRC department estimates that 50 percent of residential requirements can be met by installing solar panels on the roof of residential buildings. That’s a big number, considering my home generated only 27 percent of the house’s power and not all homes are candidates for solar power. It’s a goal worth reaching for, since a benefit of installing solar panels on roofs is the wise use of space and the fact that it saves valuable farmland from solar farms that are being built and looked upon as eyesores on the country landscape. 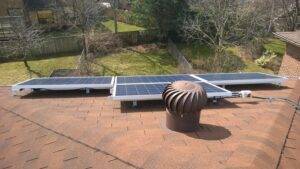 So why haven’t more of my neighbours installed solar roofs? Only one other homeowner has put up solar panels in my neighbourhood since I did it in 2012. Some of the concerns have included roof repairs when solar panels are on top; uncertainty about solar panel disposal when they are obsolete after 20-plus years; and the lack of knowledge about the FIT Program. A few of my neighbours couldn’t see the value in it and thought it was a lot of hassle for little monetary return. There were also concerns that solar panels on garage roofs would alter the streetscape of our neighbourhood in a negative way. During the installation stage, we had solar panels planned for the garage roof, but after talking with my neighbour, we decided against it, as he did not want to look at solar panels, so I had panels installed only on the top roof, out of view.

For me, the experience was well worth it. The question remains, though: How are we going to reach these lofty renewable-energy goals without subsidies and taxpayers footing the bill? At 80 cents per kWh, Ontario’s FIT Program is paying more than the average homeowner, who pays 16 cents per kWh. That’s been a major criticism of the program, and it is not sustainable over the long term. 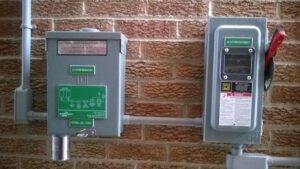 The solar installation included a second meter to measure all the electricity fed back into the grid, as well as two other boxes for the power connection and the kill switch.

Perhaps we need another approach, such as having solar panels included in the building code for all new constructions. One thing is for sure, although solar power’s benefits have been well documented, our energy policy needs a reliable power grid to manage peak demand periods of electricity consumption. Power companies must be able to get access to power on demand, and solar cannot deliver that when it is subject to weather conditions, while other sources like hydro, gas-fired plants and nuclear can be turned off and on as power is required. Currently, Canada has a surplus of electricity and exports 50 billion kWh (50 GWh) a year to the U.S. In the end, solar can only complement the system and cannot be relied upon as a core power source, especially during the winter months, when only three percent of my home’s power was generated by solar.

In Germany, a world leader in solar power, they created a renewable-energy market with a similar in-tariff system that the Ontario FIT Program is emulating. The program was started in 1991, and renewable energy today accounts for 31 percent of their energy needs, with solar at 6.9 percent. But this has come at a cost, as renewable energy is more expensive to produce than other sources and also needs to be subsidized. Homeowners are now paying a renewable-energy surcharge of 6.2 cents per kWh to cover this high-cost energy, which is facing heavy political criticism in Germany. It seems that the renewable-energy effort requires more time to figure out what will work best for the consumer pocketbook and the environment.

Elsewhere, we’re seeing the creation of a net-metering system, where market rates for electricity are used instead of a fixed rate, like in Ontario, for any power that goes back into the grid. This approach is being used in Saskatchewan, Quebec and Nova Scotia, with each province having a unique policy but similar framework. In those provinces, homeowners get a credit on their electricity bill for all the power fed back into the grid. In Saskatchewan, for example, you can get a 20 percent capital cost rebate.

According to the Canadian Electricity Association’s 2015 annual report, the industry trade association of electric producers saw the use of coal decrease by 8.8 percent and renewable energy increase by 20 percent as a source of power between 2013 and 2014. (Renewable accounted for 53 percent of the power that replaced coal power, with natural gas and nuclear making up the difference.) During that same period, sulphur dioxide emissions from all power sources decreased by 9.7 percent—from 241.52 thousand tonnes to 218.05 thousand tonnes. That would indicate that the switch to renewable sources is helping, especially when you consider that the reduction in sulphur dioxide emissions is equivalent to taking about 2,500 cars off the road.

In the end, through this phase of industry trial and error, the market will find and migrate to a low-cost solution for green energy—it has to. Solar may seem like an expensive and unreliable choice right now, but the alternative is also unsustainable. After all, the value of the environment? Priceless.

Is a regular contributor to Harrowsmith.  He has written stories about home care, real estate, and technology.  He is an avid sportsperson and enjoys playing hockey, golfing, cycling and fishing.  He aims to make the world a greener and safer place through his work as a writer and is passionate about energy and its impact on the environment.