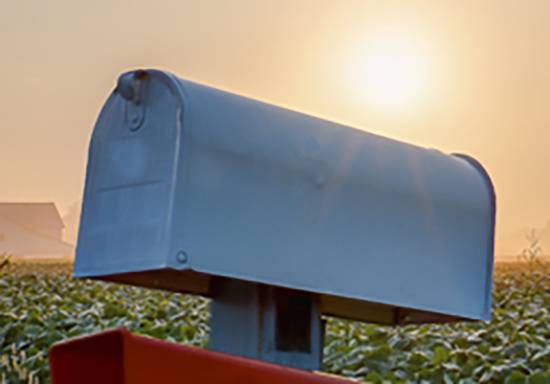 How hard can it be to get your mail in the country?
By The Harrowsmith Team

When my husband and I moved to a quiet, tree-lined, dead-end dirt road, our house had been uninhabited for20 years. There wasn’t even a mailbox. No problem, we thought. Little did we know or would have believed just how difficult it would be to get our mail.

We bought a post box at the local hardware store—nothing showy, lest it attract shotgun fire or become a target for drive-by whacks (hey, it happens). We nailed it to an old fencepost we found in the barn, dug a deep hole and planted that plain-Jane mailbox in front of our house.

It was a Kodak moment if there ever was one, My expression was one of de-light, my husband’s a kind of bashful pride that spoke of really making our home here. A kind of “Would you look at this,we even have our own mailbox!” 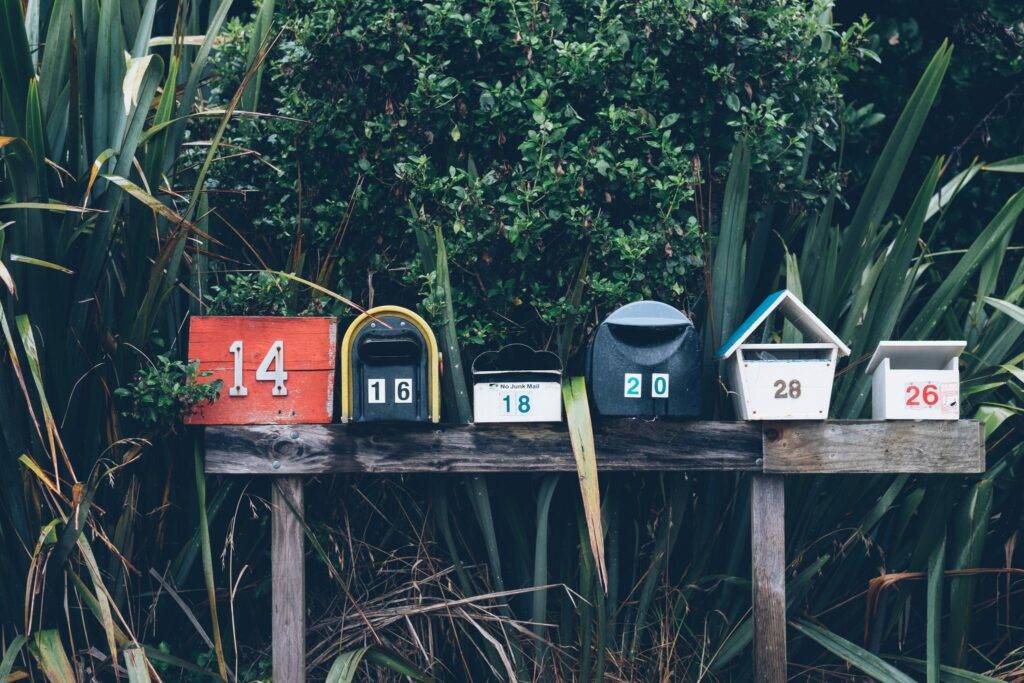 In the city, our mail was delivered on foot, come rain, sleet or snow, by an understandably fit Canada Post worker, who slipped bills and cards through a slot in the front door or stashed them in a wall-mounted box that came with the apartment building. Easy.

This was different. Very different. Turns out, rural, car-driving mailmen have a lot of rules. We encountered them by breaking them, one by one.

First, we were told we had put our precious mailbox on the wrong side of the road—apparently, mail deliverers won’t cross a quiet road and open their driver’s side window, but will reach over the passenger side to shove the mail into the box.

So we dug up our picture-perfect box and reinstalled it on the other side of the road. to considerably less fanfare.

Shortly after, we received a complaint that our mailbox was the wrong height. Drats! The picturesque fence post had to go. We found a taller wooden spike, reattached our now slightly worse for wear box, and repeated the whole postbox planting process a third time.

One November day, someone in a pickup backed into our driveway to turn around and plowed into our mailbox, snapping the post at ground level, pinning the box under their back fender and dragging it into the middle of the road. They left it lying in the dirt and took off in a cloud of dust. Another Kodak moment: Picture us waving our arms and cursing in disbelief. “Did you get the licence plate?”

“There came more, increasingly official notes. We had to shovel the snow AWAY from the box, or our mail would be held at the post office (a 20-minute drive away).” 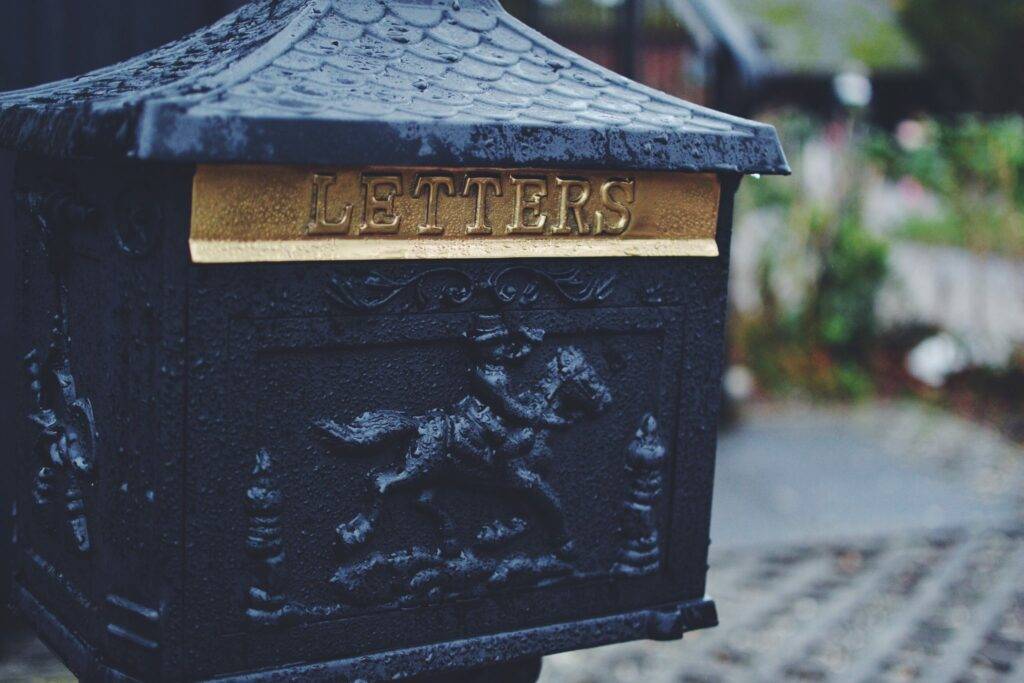 We picked up the poor, prone box and jammed it back in its old hole. But with the bottom of the post now missing, it was too short again, and the box so dented the lid wouldn’t shut tight. So our mail got wet on snowy days. And it wobbled. We piled stones around the post to steady it and hoped for the best.

By Christmas we were notified to remove the stones. It seems our mailman had popped a tire on a sharp edge. We tried to comply, but the rocks were frozen into the soil and would not budge. So we piled rounder rocks over the offending ones, and started shovelling snow over them to make the mound smoother and safer for the mailman’s car. The snowplow provided its own magnificent cover-up.

There came more, increasingly official notes. We had to shovel the snow AWAY from the box, or our mail would be held at the post office (a 20-minute drive away).

The whole rural mailbox experience was losing its lustre fast.

With the spring thaw, the post lost its toehold. Another threatening missive. We pulled it out of the soil like a cursed weed and sprang for one of those metal post holders with a spike on the end. We reckoned that would do it.

Trying to muster some of my former enthusiasm, I bought a pretty, magnetized box cover saying “Home Sweet Home” and slapped it on. The mailbox finally looked and worked great. 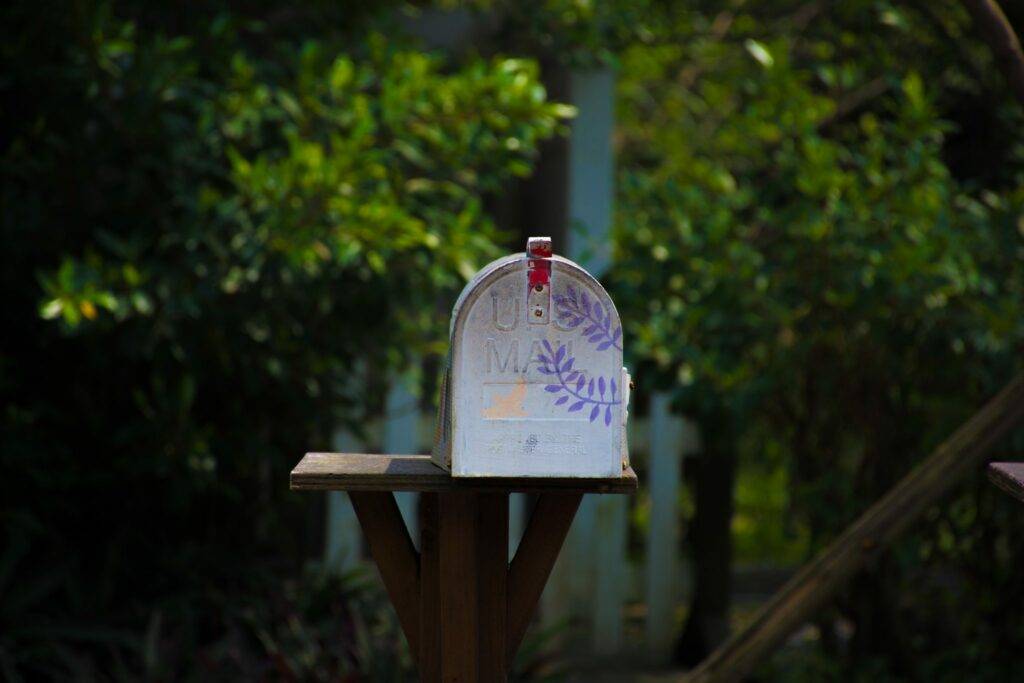 But our troubles were only just beginning. The kicker came with the national rural mailbox inspection in the summer of 2008.

First a strange car came barrelling down our road again and again one afternoon, while someone stood at the side with a stopwatch. I flagged them down to say “Slow down! You’re going to hit my dog!” They said they were inspecting the safety of rural mail delivery.

Since no cars had passed that day, they had decided to simulate the dangerous traffic conditions they imagined they had to protect the posties from. I kid you not. They continued roaring by at high speed and I shepherded the children and pets indoors.

Looking chagrined, they then told us we had to move the mailbox. “Do you get along well with your neighbour?” they asked, gesturing to the next farm and its perfectly situated post, half a kilometre away. Were they suggesting we share their mailbox? “Not gonna happen,” I answered.

“Then you’ll have to get a post office box in the village,” they said. “I work from home” I replied, “and I need my mail delivered here.”

After several more minutes of head shaking and hopeless expressions, one of them said: “Maybe you could move it to the other side of the barn.” Done. So once again we replanted the box, taking care to make it level and correct in every way.

That’s not the end of the saga. A while later the car was back, zooming up and down the road with different people inside. Now our barnside location was no good. We would have to cut down my hydrangeas to create a “visibility zone” for the requisite number of metres, and locate the box farther into our driveway, so the driver could pull completely off the road to deliver the mail, away from the imaginary traffic.

The birds twittered, and far off you could hear the putt-putt of a tractor echoing through the valley. There had been no other vehicle traffic the entire day as usual. I gestured around the bucolic scene, trying to explain the obvious. “There is never any traffic here! Dogs sleep in the middle of the road!”

It was like dealing with lunatics—of an extremely bureaucratic sort. The one who seemed to be in charge stuck an orange flag in the ground to mark the spot. Later that day I saw more of those little flags along other dirt roads in my rural neighbourhood and people out fiddling with their mailboxes.

The speeding car returned a few days later. They came “to check,” but did not stop. We figured everything was fine.

Cut to few weeks later, and the band of jokers were back at it again. A new guy showed up: “You’re gonna kill me, but your box is too close to that tree.” He offered to move it himself if I could lend him a shovel. I watched as he planted that box in the sweet spot he’d selected, pretty much exactly where it had been originally!

In all, there were five visits to our sleepy dead-end road in the middle of nowhere. I shudder to imagine how much all this ended up costing taxpayers. 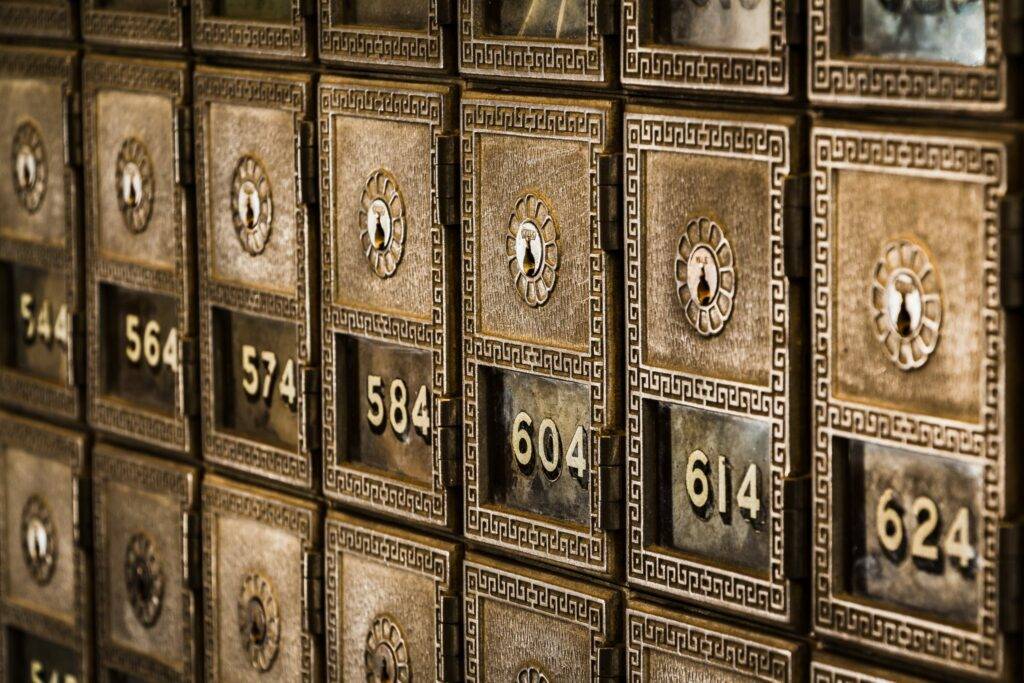 And I doubt the saga is over. Shortly after the final visit, I noticed one of those community mailboxes set up nearby. We have not heard anything formal about it, but there it sits, officious and ominous at the bottom of the hill. I wonder if eliminating home delivery was the plan all along.

It Will Be Spring When It Is Spring
Posted on Wednesday, May 20th, 2015
Filed under Rural
Tagged: community mailboxes | headache | mailbox