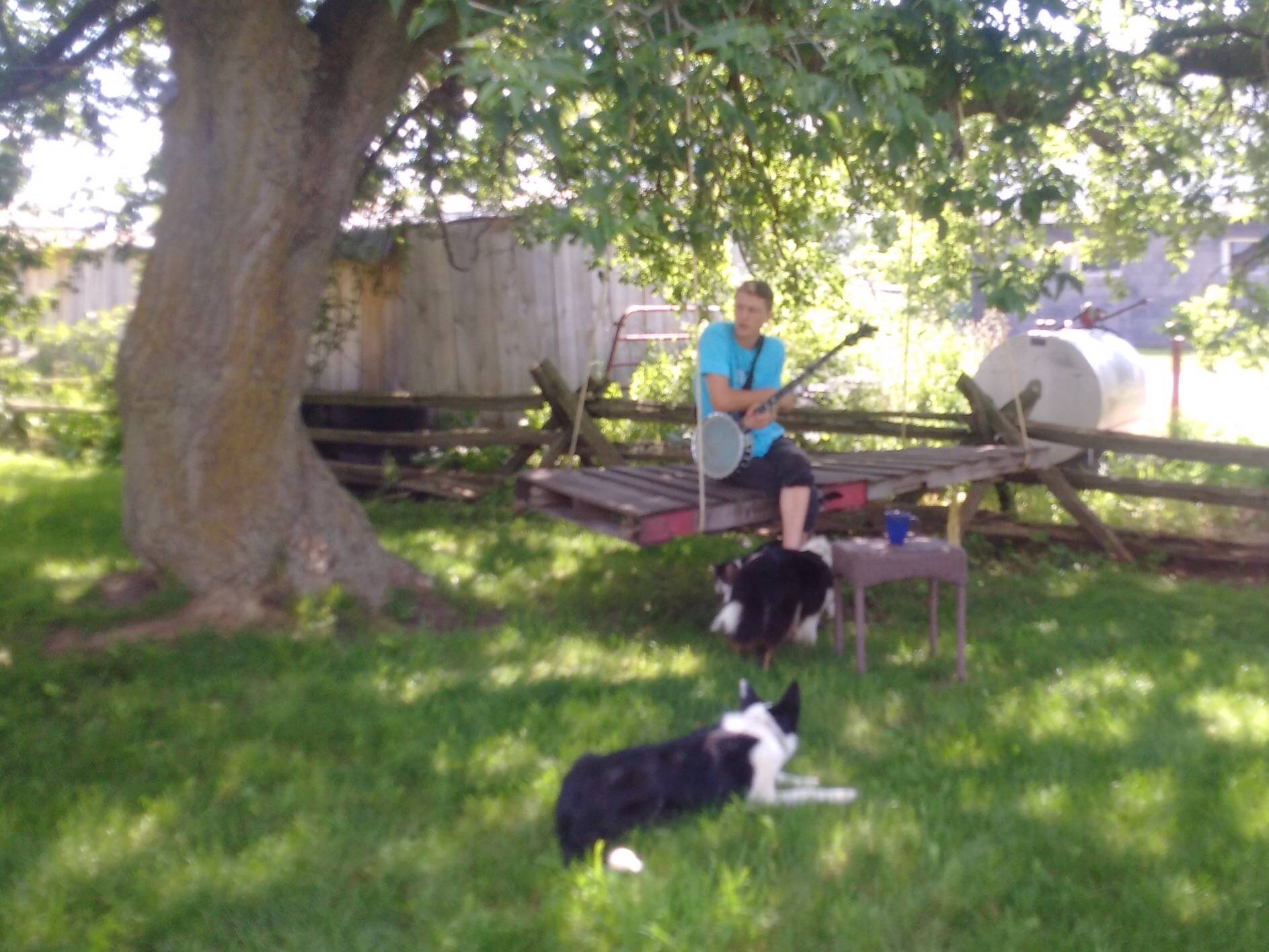 A walk through time and fire, on Drover’s Way Farm
By Sarah Loten

In the early years of our farming journey, when we were young and brimming with enthusiasm and intelligence, we saw fire as a free and easily available tool to use on our farm. After all, here on Drover’s Way Farm, near Perth, Ontario, trees abound, and our home farm was fortunate to have acres of woodlands, along with open fields and pasture land. We could come into the large stone fireplace in the kitchen, which had provided heat for generations before us, and bask in the glow of our own fire, created and provided by our own property and our own hands. We had only to harness this tool, which couldn’t be that difficult, since so many people before us had done this, and for free!

Our first adventure in fire started simply enough, with the need for firewood. This need became readily apparent that first year, as we moved into that beautiful yet bracingly cold stone-flagged kitchen, in the dreary month of November. We hadn’t thought ahead to the need for warmth because free firewood was available outside our back door. Unfortunately, it was still in tree-size lengths, standing on the ground. To be fair, we were waiting for the imminent arrival of our second child and had done much renovation (including uncovering that stone fireplace, which was buried beneath plaster and five layers of wallpaper), so we had been rather busy. We didn’t have the money for a furnace, and wood-burning stoves and fireplaces were our only source of heat. We needed heat and we had to get the wood for fire.

Did I mention that these lovely eastern Ontario farm woodlots tend to evolve on the swampier or rough land that isn’t suitable for any other farming purpose? Well, yes, we hadn’t thought of that, too, and this was November, the month of cold rain and sleet. Off we went, with a toddler in tow, me with more horizontal frontage than vertical height, my husband steering a stone boat behind a horse (that’s a story for another day), headed to the back woods.

We encountered our first dilemma as we steered our toddler, sitting on that stone boat, into the corner of the log barn, breaking harness and reins. That was an expensive start! We regrouped and my daughter (age three at the time) wisely refused to stay on the stone boat and marched ahead to “’ead the way,” as only a toddler with a temper can do. We continued to fuss with the horse and equipment, glancing periodically to see our child way off in the distance, making quick headway. As we got the process going again, we glanced up and suddenly I couldn’t see her anymore. Panic, concern and then a wail, which, as all parents know, is a comforting sign. We headed in the direction of the wailing child and found her in tears, walking with one boot in her hand, as the other one had been lost in the swamp. We scooped her up and, with the grit of newly minted farmers, proceeded to venture onward to get that essential firewood.

The horse would not move; it refused. In frustration, because this was a horse and surely a horse could pull a stone boat, we encouraged, clucked and pulled. We realized that the stone boat was well and truly stuck. At this point, the last thing on our minds was firewood, despite its importance. We had to get out of that area before anything else got stuck. And we were the only ones silly enough to be out in a swamp on that cold, wet day. The end of this story is that we ordered expensive (not free) cut and split firewood that year. It arrived on our doorstep, not a moment too soon. We stacked it and burned it, enjoying some lovely times with a new baby, in front of that 160-year-old stone fireplace.

There is nothing like a fireplace, or any hearth fire, to bring warmth, meaning and a centre to family life. I think the emotionally embracing warmth of fire is as old as humanity itself. Wood fire, with its dancing beauty and ever-changing flame, is a symbol of the gathering, tending and sustaining that is part of the long history of any farm.

As I wander in the back woods, looking for potential firewood for the following year (yes, we have become smarter in our maturing years), I’m often struck by the beauty of the landscape, the proliferation of spectacular old trees, particularly the sugar maples, as well as groves with cedar, birch, ash and many other species. It feels wilder in the bush, closer to nature, less organized and man-made than our pasture and crop fields. However, I know this is not entirely true. Certainly, in the present time of our stewardship, other than cutting deadfalls for firewood and trimming paths for access, the landscape is mostly left to evolve as it will. Yet, going back many generations, I can see how the landscape has been continuously altered by the use of fire.

There is even evidence of Clovis people having been in our area some 11,000 years ago. Little is known about their activities, but we do know that they engaged in hunting, gathering plants and fishing close to water. Our farm was on the edge of the Champlain Sea at that time. Tools, such as axe-type blades, have been found in this area, which shows activities of hunting, gathering and quarrying. Fires were burned, used to keep people warm and for cooking food, not unlike later generations living in this very same landscape.

The Algonquins have been the primary Indigenous population in this area for at least 8,000 years. As I wander down ancient paths in our woodland, more recently cleared by Bush Hog and tractor, swatting at deer flies that seem to plague eastern Ontario woodland creatures of any sort, I try to imagine what it would have been like to live and work off the land as an Algonquin hunter-gatherer. Fire would have been used to burn the brush piles that were created through clearing areas for living, creating and accessing land. The fires would have created smudges, which would have been a huge relief from the biting insects during the summer and a reprieve from the cold of winter. Fire would have been used to dry the gathered nuts, berries and plants. Food stocks such as wild leeks, walnuts, blueberries, rice and fiddleheads would have been roasted or dried with fire. Cooking for enjoyment and safety, as well as preservation for the long winter months ahead, would have been vital tasks. Hunted meat, like deer, beaver, turkey and squirrel, would have been cooked on hot fires or preserved through long hours of smoking. Hides from deer would have been tanned through drying fires and smoking, and used for clothing and for water-repellent shelter. Children would have gathered around fires for warmth, warned of the dangers of getting too close but standing close enough to stay warm and dry. Some things never change in parenting!

As I continue my walk through our cedar bush, I think of the tea that would have been made, over a hot fire, using the flat evergreen leaves, in the deep dark of winter. It would have provided essential vitamins at a time when fresh food was mostly unavailable. Thinking of my predecessors sipping a warm tea, in front of a hot fire, surrounded by loved ones, I feel a kinship with those who have come before me.

It is the maple bush, though, that captures my attention most vividly. A considerable portion of our farm has maple bush, like so many farms in Lanark County. To this day, our county produces huge quantities of maple syrup, and that all started with the Indigenous population, approximately 8,000 years ago, long before settlers arrived in this area.  Maple bushes occur naturally, but people used fire to tend, cultivate and encourage the bushes into higher levels of productivity. Maple syrup production was a big part of Indigenous culture in this area. Many people spent many hours and days tending fires to boil the sap down to syrup. Community ceremonies and festivals featuring maple syrup were a part of welcoming spring and honouring the safe passage through winter. Maple syrup was liquid gold that provided sustenance, energy and essential vitamins and minerals, at a very hungry time of the year. The long hours of tending fires for syrup production created gathering and connecting activities full of hope and renewed energy after many months of snow, dark and cold. To this day, our son produces syrup on our farm, for our family and friends. Our community of Perth celebrates the end of maple syrup season with an annual festival.

With my mind in the past, thinking of the gifts of fire and trees, I continue my walk through the woods. I come to the edge of our bush, where our land opens out onto permanent pasture. Pasture is a central component of this sheep farm. Livestock have grazed these pastures since the early 19th century, perhaps even before. Again, fire played a central role on this farm, in pasture development.

Our area brought many Scottish and Irish settlers with traditions of sheep, livestock raising and crop growing. Settlers cleared arable land of trees and brush. They burned stumps, weeds and brush as they altered the landscape to suit their purposes. They also used the resulting ash for fertilizer and for making other products.  Settlers used methods they learned from the Algonquins, but the Scottish family on our farm, like so many other farms, were builders. Forged by fire were the tools used for settlement. The pioneers were builders of barns, houses and, above all, fences. Landownership and delineation of land was paramount in the mind of most settlers. Rail fences dominated the landscape. Groves of trees were plentiful, and rail fences were strong, free and easily made, once the techniques were learned. To this day, rail fences dominate the pastures and fields of our farm, as they do many other farms in Lanark County. Most of the rails on our farm today date back to the mid-1800s. We have changed the shape of the fields and pastures, as have previous generations, but the rails endure. They get dismantled and reassembled as needed. When moved, it is possible to see the charred marks from 150 to 200 years ago, when some hard-working settler first built those fences.

As I return to the farmhouse after my walk through history, I feel connected to the enduring symbols of the land and people who preceded me on this farm. Like them, we work hard, seeking ways to continue living off the land, continuing the legacy that was passed on to us. I’m reminded that we are but a link in the long chain of human and natural activity on this farm. When we started farming many years ago, it felt like we were being baptized by fire. Now, with time, I realize that we, the previous generations and the landscape that we tend have all been forged by fire. Fire is an element that is provided by the natural world but needs human activity to be created. Much like this farm.

The Quandary of an Old Quarry