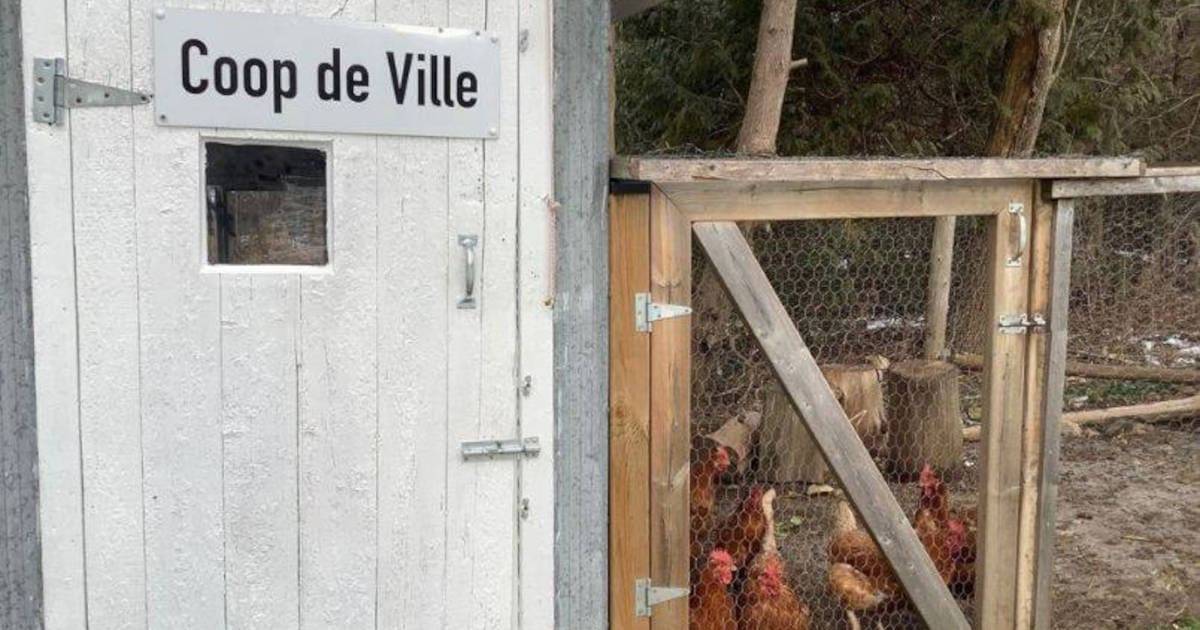 Raising and caring for chickens in the age of COVID has its own set of challenges.
By Michael Schultz

We live on a pleasant little acre outside Toronto. I’ve been here since the early 1980s. Over the years we’ve had chickens. Now we’ve added beekeeping to the mix. We always have a large garden. Each year we get about 6-8 chickens from the local farm supply store, usually in mid May. I grew up in the city but I’m a country boy now. (Think John Denver.)

When Covid scrapped a May trip to the south of France, we decided to get the chickens earlier. They arrived in late March and the snow was still flying. The garlic was poking high above the snow in perfect rows.

Each bird cost $11.00, the regular price. By May it was tough to get chickens and if you did they were two or three times the price. Chickens have increased in popularity in the city ( where allowed). Seems like everyone wanted to get in on the action. The same was true of seed companies and nurseries. The product was flying off the shelves. Chickens are a daily commitment. We don’t keep a rooster ( I declined one offered by a neighbour). The hens make their own “bok bok” noise usually in the morning – quite loud. I think they are announcing the arrival of new eggs.

The chickens are about 4-5 months old when you get them. They start laying right away and the eggs gradually get bigger. In the spring, with longer days, you’ll get a few double yolk eggs. They are remarkably big. Chickens will lay well for 2-3 years.

Our coop is an old shed with an adjoining fenced-in run. They get to range reasonably free just not in the garden. Besides they need protection from weasels, skunks, racoons, hawks, coyotes and other varmints. We need masks – they need a different kind of protection. Girls, it’s for your own good. I’d dearly love to let them roam but they’d end up on the road ( Eg: why did the chicken cross the road?). One year my neighbour’s lab sprung loose and got one of the chickens in her jaws. The dog took it over to its owner’s stoop. The bird was returned still alive and slightly shell-shocked. She didn’t lay an egg for a few days. “No more rambling for you.”

They get all kinds of kitchen scraps. We avoid citrus, avocado, potatoes – otherwise they are like a bunch of teenagers with bottomless pits and they’ll eat anything and everything. It’s a great way to clear your lawn of dandelions and plantains. They love ‘em.

About two years ago my wife came up with a terrific name for the chicken house – “Coop De Ville”. A close second was “Pullet Surprise” (Think Pulitzer). Now we have a sign with Coop De Ville on the door.

Over the past few years we have given the hens away to a neighbour a few lines over. He has an indoor year round operation. Ours was essentially three season. My neighbour would bring a flat ( 30 eggs) of eggs over or I would pick them up.

About 30 years ago I kept chickens through the winter by running a cord down from the house to support a 60-watt bulb. The shed has no electricity. I’d come down on a February morning and they’d all be gathered around the bulb – there was a slight smell of burned feathers in the air. Their water and even the eggs were in danger of freezing.

This year’s chickens are solid layers – often producing an egg a day each. We sell a few dozen to neighbours, give away some and use the rest ourselves. Production slows down slightly in the fall.

This year we’ve decided to keep the birds.

I commissioned my son-in-law to winterize the coop.

The old window from the 1950s got replaced with a much better one. The whole shed was insulated and boarded. The front door, once drafty, got a padding of space age insulation. Close to their roost inside and above the laying boxes on the wall we put a little heater called Cozy Coop. It has two settings and is safer than a heating lamp. Hanging from the ceiling is a light. It is on a timer and comes on about 5:00am for about 4 hours. Laying hens need their light. Cozy coop – cozy chickens. I put a thermometer on the opposite wall. Chickens can handle low temperature but as it gets colder we’ve certainly improved their quality of life and survival.

They are hybrids but we don’t want to eat them. They are there for the eggs ( the cackleberries, hen’s fruit, yellow eyes, oeufs. etc.).

During summer days we’ll put some garden chairs down by the run. Together my wife Madeleine and I enjoy the sunshine. We’ll have a gin and tonic. Occasionally we’ll hang an entire cabbage in the run. It dangles at their head level and they peck at it like a tether ball. It takes them a day or two to make it disappear. We took an old CD and hung it in there for them to peck at. Chickens are a source of constant entertainment. They are highly curious even if sometimes they behave like the sky is falling. OK so we don’t get out much but then who does these days?

By fall the garden still has some spinach, lettuce, Brussel sprouts, chard, kale, beets, dill, and carrots. The bee hive has contributed about 20 frames of honey – we spin and jar. Potatoes, garlic and squash are in the cellar. The chickens are happy.

We’ve travelled overnight a few times since March 2020. You do need to get someone to drop by to look after them – fresh water, fresh food, clean coop. The benefactor gets the eggs.

It doesn’t look like we’ll be travelling far this year or in 2021, so we are committed to ‘animal husbandry.’

Perhaps by the time spring rolls around we’ll have the necessary vaccine to free everyone up. Meantime, we’re locked down (as they say) and chicken farming.

As for the heater mentioned in the article here’s their link: https://www.cozyproducts.com/products/cozy-coop

The product has been great……looks like a flat screen TV, we’ve hung it on the wall behind their nighttime roost high in the coop.We have no outlets in the coop but we ran a cord down that handles both the light and the heater.


As for chicken suppliers…..best for people to simply contact a local feed mill. They usually bring in your order from a supplier like Frey’s in the Waterloo/St. Jacob area – be sure to order in January – February to ensure you get on the list….another idea is simply buying off a local farmer of course.

Programs like rentthechicken.com are growing – perhaps the substance of another article – that and of course jurisdictions (urban) that allow folks to have chickens.

Michael Schultz is a freelance writer and an educator living in Halton Hills, Ontario. He and his wife Madeleine enjoy the country lifestyle. New projects this spring include building a cold frame for veggies and a sugaring off stove made of cement blocks for his evaporator pans.